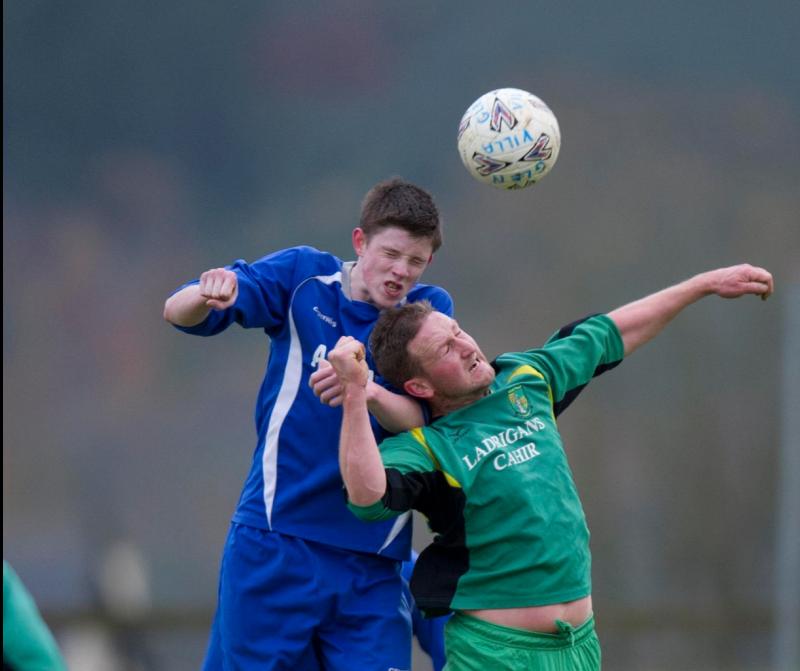 This file photo shows Kevin Gunne rising highest to win this aerial duel. Gunne was on target for Kilsheelan United on Sunday last with a super hat-trick.

Kilsheelan United continued their topsy turvy start to the Second Division with a second win in three games over a Rosegreen Rangers side struggling for consistent form even this early in the season.
The home side had the better of the exchanges throughout and a Kevin Gunne hat-trick, along with a goal by Craig O’Brien give them the advantage over a Rangers side who could only respond with two goals from Jack Marshall and Ned Cullivan.

Clonmel Town’s seconds recorded their third straight league win in Division 2 with a very hard-fought victory over an excellent Mullinahone side on Sunday afternoon last.
Town took the lead after three minutes when James O’Reilly coolly slotted home after an excellent ball by Harry O’Connor, but the visitors got level ten minutes later when a defensive mix-up let in their attacker to head home.
Mullinahone were ahead after 20 minutes when another defensive mix-up left Ashley Lazlett in to walk the ball into net, much to the consternation of the home crowd.
There’ll be some work to do at training for Town this week.
But they were back on terms before the break courtesy of a Harry O’Connor goal, which levelled the game after great work by the Town attack sent O’Connor through to finish into the bottom corner.
In the second period Clonmel Town piled on the pressure and when they were awarded a free kick an outstanding delivery by Keenan Kerton was met by the lively Davy Morrissey, who powered a header past the ‘keeper.
They pushed the advantage out to four goals to two when Jack Dwyer broke ranks to calmly slot past the ‘keeper, and although Mullinahone started to dominate possession after that, the hosts’ defence was holding firm without giving any chances away.
Town made sure of the points when two substitutes combined, with Brandon Kennedy making a great run and he split the Mullinahone defence with a delicate pass that Ciarán Ryan rifled the ball past the helpless goalie.