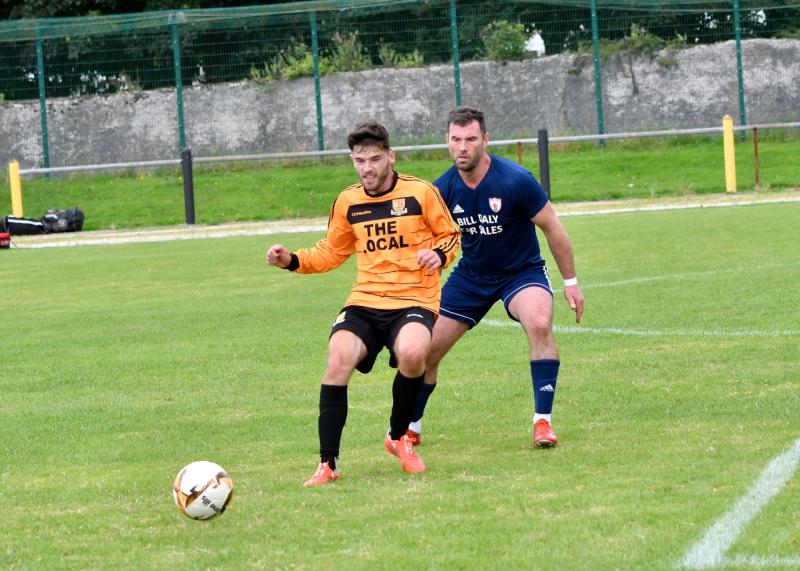 Tony Egan (at back) in action against Clonmel Town recently. Egan scored twice for Bansha Celtic in their 4-1 win against Vee Rovers last Sunday.

Glengoole United 0 – 7 Clonmel Town
Clonmel Town have started this year’s TSDL season with two good wins, but even they might have been surprised at how good a performance they put in when hitting Glengoole for seven away on Sunday morning.
They came out of the traps fast and put a marker down inside ten minutes when Adrian Cleere opened the scoring with a headed effort from 10 yards.
After that the visitors took complete control and added another three goals by the break through Alan O’Donnell, Dylan Guiry and Jack O’Donnell to give them a four-goal cushion.
And although the home side did start well in the second period, even creating a few half-chances, Town soaked up what pressure was applied and looked to strike on the counter.
Fitness also told, with the stronger visiting team eventually adding three more before the end through Jack O’Donnell, David Morrissey and Evan Maguire to leave them in seventh heaven atop the TSDL Premier league table after the first three rounds of games.

Bansha Celtic 4 – 1 Vee Rovers
The home side started the game well and had a number of chances early on, but it was the visitors who struck first when Bansha failed to clear a free kick and Jake Kiely struck goal from close range.
That started a mini period of dominance from Rovers as Celtic struggled to get going afterwards. But they eventually played themselves back into the game and got level on the half-hour mark when Bernard Fitzgerald finished well at the back post.
This was how the game went to the break, and the second period started with both sides struggling to break each other down.
The hosts, though, finally made the breakthrough and took the lead on the hour mark when Killian Fitzgerald headed a corner kick back across the goal and Tony Egan was on hand to head the ball into the top corner.
Well on top now, Tony Egan extended his side’s lead when he was on the end of a Stephen O’Dwyer corner kick to make it three goals to one, and the game was put to bed with ten minutes to go when Niall Daly got on the end of a Bernard Fitzgerald through ball and finished to the corner.

Cashel Town 4 – 0 Cahir Park
Cashel Town picked up three more valuable points with a comprehensive win over Cahir Park at Palmershill on Sunday evening.
The home side were the better team right from the off and opened the scoring after nine minutes with a good strike from Daniel Fitzpatrick, who ran onto a clever flick from James Harding.
The hosts doubled their lead eight minutes before the break with a goal from Eoin Byrne, who provided a sublime finish after a great ball from Callum Meagher.
Cahir, to their credit, kept themselves in the game with great tackling and defending, but just before the hour mark the home side assured themselves of the points when Ian Hahessy scored from close range after a bit of ping pong around the goalmouth.
They rounded off a good performance when they added the fourth with the last kick of the game from Patrick Farrell after a good exchange of passes around the visitors’ penalty area.