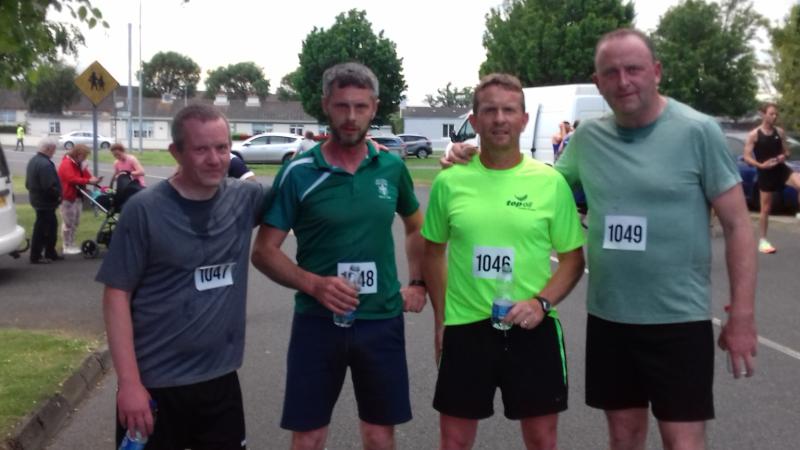 Pictured are, L/R: David Joyce, Philip Ryan, Richie Doyle, and Denis O'Reilly all Holycross who competed in the 5k race. Well done to all

Thanks
Special word of thanks for your generous support at our Annual road races and clothing collection held last Friday and Saturday, June 17 and 18.

Best of Luck in All Ireland T&F
Best wishes to athletes David Ryan 400metres, Sean Mockler Hammer & Weight for Distance and Daniel & Dillon Ryan Long Jump who will all be representing the club at the National Senior &U23 Track & Field Championships in Morton Stadium Dublin this weekend June 25 and 26.

Jimmy Butler Remembered
Jimmy Butler was a cross country runner with Moycarkey in the 1960s his late brother Danny was also well known in athletics circles.

One of Jimmy's highlights in running was back in 1961 the following is an extract from our Moycarkey Coolcroo history book remembering that day: 'The first cross country championship of the season was held in Clonmel. Jimmy Butler was our local hero and the individual winner. He led his team to a comfortable victory over Cahir, 41 points to 56 points, with Holycross and Coolcroo chasing them home.

The scoring six –were Jimmy Butler 1st, Tom Molloy 11th, Billy Shanahan 12th and Michael Bannon 17th. ‘The Munster Tribune’ in paying tribute to the success said: “Moycarkey were at last rewarded for years of perseverance and gained consolation for many narrow defeats. Until Sunday lady luck has often failed to smile on their efforts and the major honors always seemed to elude their great work. Jimmy Butler the young Moycarkey captain ran a well-paced race to take the individual title”.

The same paper as their ‘Sports Star of the Week’ selected Jimmy Butler. The profile said“ Jimmy Butler has been competing in athletics for three years and was a member of the Tipperary novice team and was also on the Tipperary youths side.

His performances so far that year included runner-up in The Coolcroo open novice and won the Ballynonty open youth’s race.

Jimmy Butler formerly of Horse & Jockey was laid to rest on Monday June 20 in Upperchurch County Tipperary Sincere Condolences to his family, neighbors and friends, May he Rest in Peace.