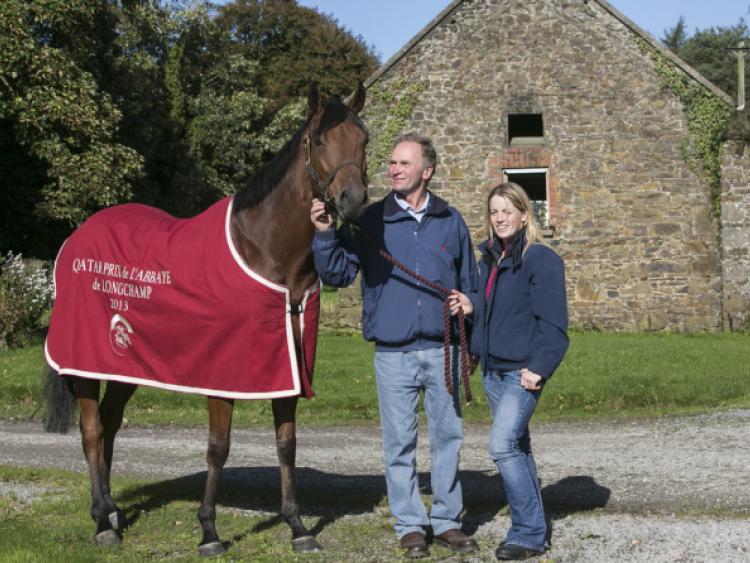 Earlier this month a small stable from Fethard won the Prix de l’Abbaye de Longchamp, the first race on the card at the Prix de l’Arc de Triomphe meeting at Longchamps in Paris, with bargain basement buy Maarek, once a cast-off from a large Newmarket stable.

Earlier this month a small stable from Fethard won the Prix de l’Abbaye de Longchamp, the first race on the card at the Prix de l’Arc de Triomphe meeting at Longchamps in Paris, with bargain basement buy Maarek, once a cast-off from a large Newmarket stable.

This was the pinnacle of a lifetime’s involvement in horses for Nenagh owner and breeder Peter McCutcheon, the head of the Lisbunny Syndicate.

The same could be said for Barry Lalor, who would be more often seen at Thurles or Clonmel races or the point-to-point at Lisronagh. A farmer and small National Hunt trainer for 30 years, he was happy to change codes when Maarek arrived in his yard at the end of July.

Maarek was accompanied to his stables at Silverfort, near Fethard by Evanna McCutcheon, who has a long association with the horse during his rise through the sprinting ranks. During the post-race press conference Lalor was full of praise for the dedicated team at home and gave special mention to his assistant Evanna.

“It is because of her hard work and knowledge of Maarek that we are here today.”

This was also a major win for jockey Declan McDonagh, who gave Maarek a superbly-timed ride as he had done two weeks previously to land The Dubai Airport Duty Free, a Group Three in Newbury.

The iconic sprint the Prix de l’Abbaye, a five-furlong dash, kicks off the mouth-watering Arc card of seven Group One races.

Maarek was near the back of the field of twenty in the early stages. At the halfway stage the pair started to make progress and worked their way through the pack. The race looked like going to French hero Catcall but 8/1 shot Maarek and Declan McDonagh had other ideas and showed a blistering turn of foot to hit the front within metres of the winning post.

A fortnight later at Ascot Maarek attempted to defend his British Sprint Stakes crown that he won last year but on this occasion his form deserted him. However, to paraphrase that famous line from the film Casablanca, he’ll always have Paris.