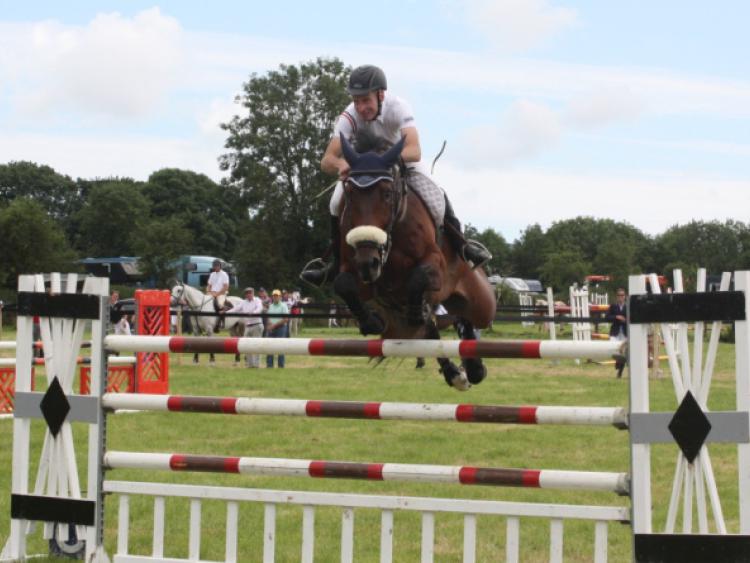 Tipperary’s Seamus Hayes and his Heatbreaker gelding Twister, collected their fifth Grand Prix win of the season, at a packed Dungarvan Show in Co Waterford on Thursday July 25, which played host to round 12 of the Connolly’s RED MILLS Munster Grand Prix League.

Tipperary’s Seamus Hayes and his Heatbreaker gelding Twister, collected their fifth Grand Prix win of the season, at a packed Dungarvan Show in Co Waterford on Thursday July 25, which played host to round 12 of the Connolly’s RED MILLS Munster Grand Prix League.

The season so far has produced some hugely entertaining jumping in this Munster Series and Dungarvan Show saw one of the most exciting finales’ to date, with the lead changing hands on several occasions before Hayes was declared the winner.

With league leader Francis Connors finishing five places behind Seamus Hayes in sixth, the gap between the top two on the league table has narrowed considerably and it now looks likely that the title will not be decided until the final round at Banteer Gymkhana in September.

Of the 31 starters, course builder Alan Wade saw 10 through to the jumpoff, with first to go Sven Hadley riding Realt Na Carrig posting a decent target, when finishing clear in 41.97 seconds, which would eventually see them finish seventh. For once Francis Connors was single handed in the jump-off, although it could have been different if his other mount Hyperion, had not exceeded the time allowed in the first round by an agonizing .04 of a second.

Connors briefly held the lead in the jump off with Bullit but their time of 41.62 did look beatable and they would eventually finish in sixth place.

The lead changed hands on several occasions with junior rider Darragh Ryan next to top the standings with Miss Souri (39.80). Kilkenny’s Eddie Moloney, who was twice crowned National champion, then set a blistering time of 37.97 with Dante Van De Noordheuvel and it looked like this could be the winning round.

Local rider Peter Moloney then showed that Ribanbelle Tame can be fast when needs be, their time of 38.29 would see them finish in fourth. Another local rider Tadhg Beecher from Tallow then went even quicker with Loughnatusa Blakeney Crannagh, a clear round in 38.20 seconds would be good enough to take third.

Seamus Hayes and Twister are always a danger in a jump–off, particularly when last to go. Incredibly they knocked over 2 seconds off Eddie Moloney’s time to take yet another win which means that Seamus Hayes and Francis Connors are now neck and neck, in the battle for the 2013 Connolly’s RED MILLS Munster Grand Prix league.

With Dublin Horse Show now on the horizon, the Munster Grand Prix League takes a break before the next round at Limerick Show on August 24 . Scarrif in Co Clare hosts the penultimate round of the league on August 31 before Banteer Gymkhana in Co Cork plays host to the grand final on September 7.

31 Starters 10 Through to Jump-off