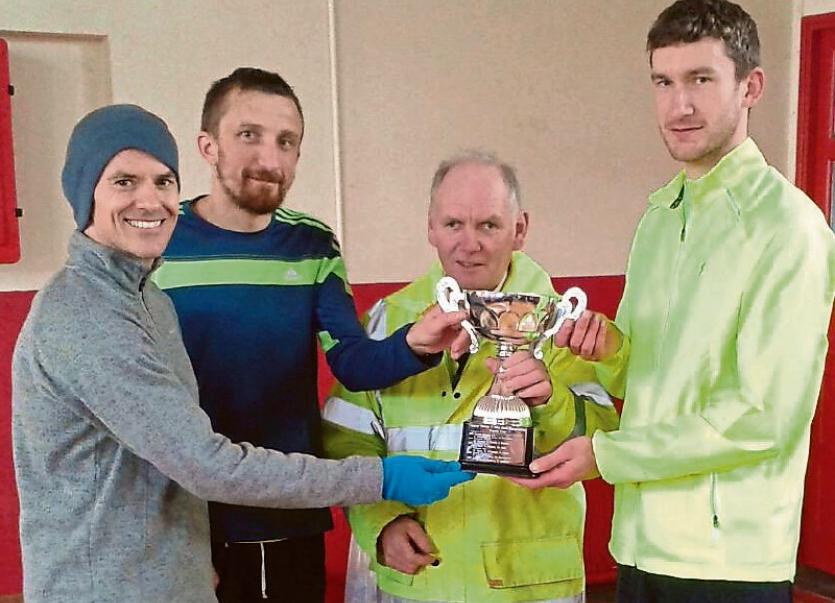 On Sunday 20th March we hosted the Co Novice B Road Championships. In the Ladies 3k event we had Jean Cooke finishing in 14th place. In the Men’s 6k event we had 4 Athletes taking part. Andrew Smyth was in top form to come home a very worthy winner in a time of 21.00, Dermot Logue put in great effort to finish in 4th place in 21.13 after leading for good part of the race but just faded out to the strong finish of Andrew. Brian Smyth put in an excellent performance in 12th in 23.10 and with 3 to score that was enough to seal the team victory and win the title by 2 points. Andrew Galloway as loyal as ever finishing strong in 22nd place, well done to all.

Very well done to our 3 Athletes of Ross Alexander, Ken Morley & John Russell who took part in the National Indoor Championships at A.I.T Athlone and it was great to see them coming away with three individual medals. Ross won gold in the o/35 3k walk and Ken and John took part in the o/40 3k race and here Ken put in fine performance to claim the silver medal only missing out on gold by one second and backed up by John in an excellent 3rd to take the Bronze medal.

Well done to Ross Alexander who took part in the 3k and 5k walks last week in Ancona Italy at the European Masters Championships. Despite the fact that things didn’t go as well as he had planned it was still great to have the opportunity to have representation on the European stage. We must give mention to Stuart Moloney from the Mooreabbey Milers club for his excellent performance to take the Bronze medal in the 3k, very well done to him and to all that took part.