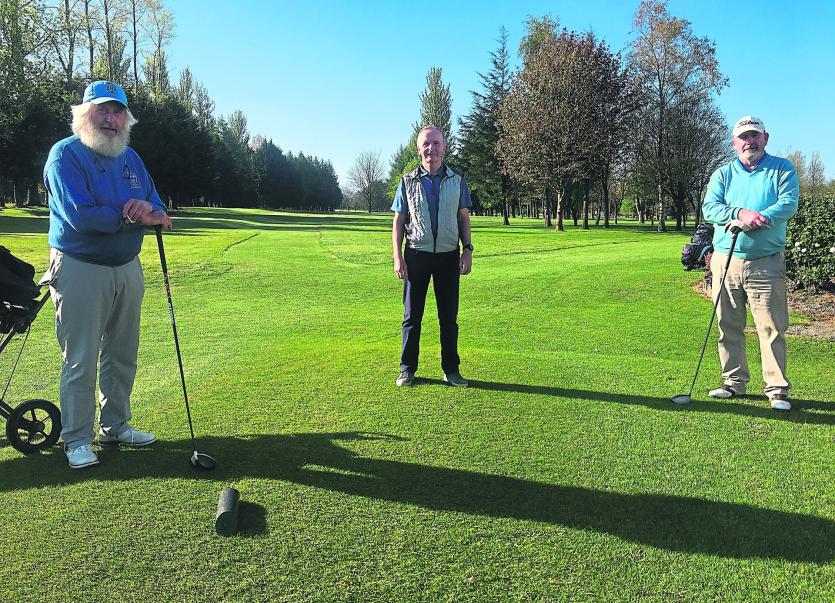 Seniors Golf
June 9. Results with 32 players taken part = eight teams some excellent scoring. In first place with 55pt were Declan Russell Pascal Whelan Philip Ryan and Joe O'Connor. 2nd with 53pts were Tom Kenny Les Mason Tom Hogan and Paddy Nolan. And in 3rd place after a count back were Liam Daly Sean Gleeson Christy O Rourke and Tommy Deegan.
June 3. Another great turnout this morning with ten teams taking part. The scoring was tight with more than half the teams in contention and in the end, we had a count back to decide the winners. In first place with 51 pts were Ambrose Purcell Donald Golden Christy O'Rourke and James Murray In second place also with 51pts beaten on the last 6pts were Denis Tuohy Pat O'Connell Pat Maher and John Browne. 3rd place with 50pts were Tom Kenny Bernie O'Rourke Les Mason and Philip Ryan. There were 2 teams on 49pts and 1on 48pts congratulations to all who took part and looking forward to next Thursday.

May 27. With ten teams taking part in our outing this morning scoring was of a high standard. In first place with 53pts were Joe O'Connor Sean Gleeson Mick Connell and Tom Hogan. In 2nd place were Tom McGrath John Fitzpatrick Les Mason and Tommy Deegan and with three teams on 51pts 3rd place on a count back were Tom Kenny Donal Golden Mick Murphy and John Browne.

May 20. Due to weather conditions our senior outing this morning has been cancelled.

May 13. Another good turnout this morning with ten teams competing and some good scores returned. In first place with 50pts were Bertie Keane Pat O'Connell and John Kirwan 2nd with 49pts were Tom McGrath George Collins and Seamus Ryan and in 3rd place on a count back were Bernie O' Rourke Pascal Whelan and Tommy Deegan.

May 6. With ten teams taking part on a brisk bright morning, scoring was back a bit from last week. The results were as follows, 1st place with 49pts Jerry Keegan Donald Golden and Tony 'O Toole. 2nd, this is where the fun starts, there were three cards with 44pts. On a count back on the last 6 holes, in second place were Sean Lee Paudie Butler and Les Mason. 3rd went to Liam Daly Pat O'Connell and Frankie Shortt.

29/4/21. Great turnout this morning with 11 teams taking part and scoring excellent overall. Results were, in first place with 50pts, Joe O'Connor Donald Golden and Tony O'Toole. In second place with 48pts Bertie Keane John Galvin and Philip Ryan. In 3rd place on a countback with 46pts were John Hassett Pat O'Connell and Frank Shortt. See you all next Thursday PG
50/50 Draw