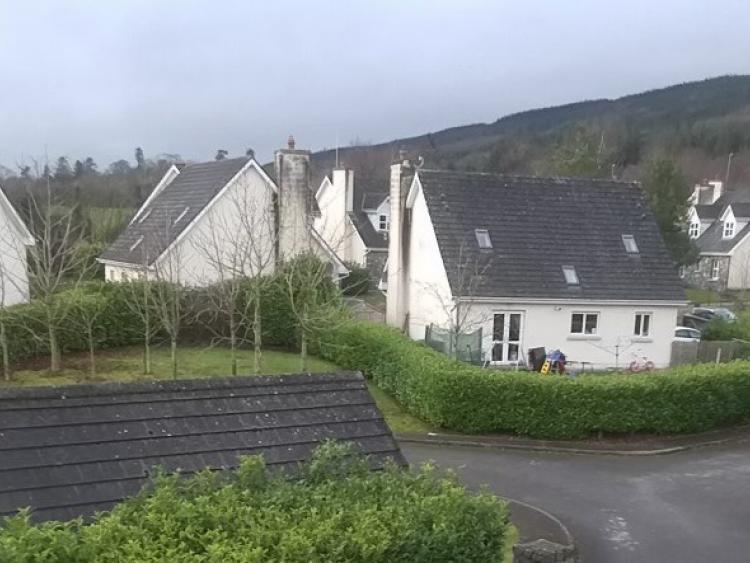 Residents at a housing estate in the Glen of Aherlow are experiencing “extreme hardship and disruption”, this month’s meeting of Tipperary County Council was told.

He said Aherlow Woods Residents Committee has raised its concerns with Tipperary County Council, Irish Water and the Environmental Protection Agency but to no avail.

Cllr Fitzgerald said Aherlow Woods was built in conjunction with the former Glen Hotel. Seven of the estate’s 21 houses were noted on the planning application as residential, with the remaining 14 as holiday homes.

‘TOTAL DERELICTION’
“The Glen Hotel has been in total dereliction for over 20 years. It’s being used as a dump, for squatters and anti-social behaviour,” Cllr Fitzgerald said.

“The sewerage system attached to the houses is also the one attached to the former Glen Hotel. It’s a bioCycle unit that requires power and maintenance at all times and it has not been working,” he continued.

“Rats are coming in where the sewerage system isn’t being treated properly. The sewage is going into the River Aherlow and the manhole covers are overflowing,” he said.

Cllr Fitzgerald called on the Council to take action immediately to resolve the estate’s issues.

“You can kick the can so far down the road that at some stage someone has to take responsibility and not use excuses like ‘oh, they were built as holiday homes and are the concern of the property developer’. Nobody knows where the property developer or owner of the former Glen Hotel is,” Cllr Fitzgerald continued.

Cllr Fitzgerald said the former Glen Hotel needs to be “erased off the face of the Glen of Aherlow” or alternatively be restored as a hotel.

“South Tipperary County Council granted planning permission for that development with a sewerage system, a manhole and septic tank which was also being used by a big hotel at the time. We wouldn't be allowed to do that today. This has to be rectified,” he added.

Concurring with Cllr Fitzgerald, Cllr Roger Kennedy described the situation as “intolerable”. He called for a coordinated effort among Council sections to find a solution.

“The planning does not allow for anything else than what’s there. The houses were never meant to be sold as individual houses, which they have been. They were meant as holiday homes, and that’s the big stumbling block that we are finding along the route to any solution,” Cllr Kennedy said.

Cllr Anne Marie Ryan said the key issue is planning, and that the residents are trying to change it from a holiday home to a residential estate.

“The residents are willing to work very hard to get this resolved, but they are meeting a huge amount of stumbling blocks. If we can get the planning element of it sorted, hopefully we can fix the environment end of it too. Giving an answer like ‘you’ve planning permission for holiday homes - end of!’ isn’t really a solution. We need to find a solution,” Cllr Ryan said.

“In other parts of the county such as Nenagh, permission has been granted for holiday homes to change use to residential. Tipperary County Council does have a record of transferring planning from holiday homes to residential, yet that information has not been forthcoming to these residents which is hugely disappointing,” Cllr Ryan added.

Cllr Micheal Anglim described it as a situation all councillors can relate to. “The set of rules we are being asked to play under to resolve these issues are not working. We had a similar situation in Ardfinnan. We need to seriously look at this. These estates, houses and people deserve better,” Cllr Anglim added.

‘RESIDENTS WORRIED’
An Aherlow Woods Residents Committee spokesperson told TipperaryLive.ie that the houses were sold off privately after the management company dissolved in 2008. The spokesperson said the estate is now predominantly occupied by families, first-time buyers and renters.

The Residents Committee spokesperson said the estate’s septic tank was meant to be maintained by the management company, which the estate does not have at present.

“The septic tank is located on the grounds owned by the former Glen Hotel. We have confirmed that the developer of the estate is no longer involved and has in writing confirmed they have no knowledge of the estate,” the spokesperson said.

The Residents Committee spokesperson said the Council was made aware of issues with the septic tank, which was overflowing during the summer months.

The Residents Committee spokesperson called for the Council to take urgent action to fix the sewerage system. “It is worrying and poses a danger to the residents of the estate and surrounding areas, many of whom have babies, young children and pets,” the spokesperson said.

“The tank is not working, as it is a bioCycle and it has no electricity going to it. It has not functioned correctly in over 10 years.

“The tank is now overflowing with raw sewage, which is entering the adjoining stream that is connected to the River Aherlow. The sewage is backing up through the pipes up to the houses. At times raw sewage has overflowed onto the footpaths within the estate.

“The residents of both Aherlow Woods and the surrounding area are affected by the smell of raw sewage. There are houses located adjacent to the former Glen Hotel which suffer greatly from the horrible smell through no fault of their own. The residents in the area are not able to open their windows. The residents are plagued with rats from having raw sewage left flowing from the tank.

“Contamination of the nearby stream adjoining the River Aherlow will cause serious potential harm, will have an economic impact on local fisheries and will destroy the natural wildlife of an area famous for its natural beauty.

“Tipperary County Council should make it a priority to take charge of the estate, despite issues with planning and developers. There are many similar previous cases of similar estates that have been taken over.

“In the immediate time, while the Council is considering taking in charge, it could desludge the tank as the Council has the permission to enter the site. This would allow for more time without further harming the environment in the Aherlow area,” the spokesperson added.

COUNCIL STATEMENT
A spokesperson for the Council said the Environment and Climate Action Section  has responded following reports of wastewater discharge from the privately owned wastewater system serving the Aherlow Woods estate.

“This has been subject to ongoing monitoring. To date there is no adverse impact on the receiving water quality,” the Council spokesperson said.

“However, to prevent any future risk of pollution we are progressing the service of a notice, pursuant to section 12 of the Local Government (Water Pollution) Act 1977-1990, to require measures to be taken to prevent water pollution.”

The Council spokesperson said Aherlow Woods is a private housing estate with a combination of owner-occupied dwellings and holiday let homes.

“It is served by a standalone developer-provided wastewater system on a site which is now in receivership," the Council spokesperson said.

“Tipperary County Council has engaged extensively with the residents of the estate since their initial contact and has committed to further engage with the residents, property owners and stakeholders involved to come to a timely closure,” the Council spokesperson added.