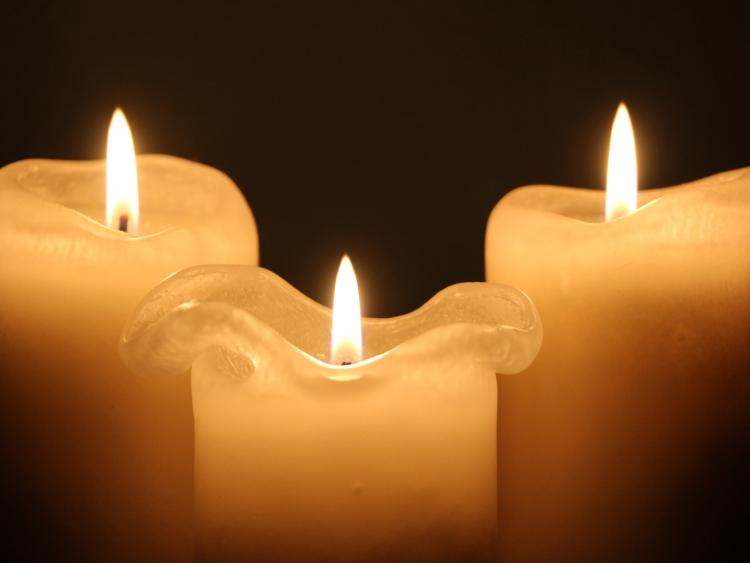 Reposing in McCarthy's Funeral Home on Sunday, November 26th, from 5.30pm to 8.30pm.Funeral Mass in the Augustinian Abbey Church on Monday at 11am, followed by burial in Cloneen Cemetery.

Reposing on Saturday at Walsh's Funeral Home, Carrick-on-Suir from 7.30pm, with removal at 8.30pm. to St. Molleran's Church. Funeral Mass on Sunday at 11am, followed by burial in Churchtown Cemetery. Family flowers only. Donations, if desired, to the Carrick-on-Suir Day Care Centre.

Reposing at her residence on Sunday from 2pm to 6pm. Removal on Monday for 11am Mass in St. John the Baptist Church, Duhill. Burial afterwards in adjoining cemetery.

Requiem Mass on Saturday at 11.30am Burial afterwards in adjoining Cemetery.

Remains arriving to Ballywilliam Church on Saturday for Requiem Mass at 11am. Burial afterwards in Burgess Cemetery.

Reposing at St. Patrick's Cheshire Home, Tullow, this Saturday 25th November, from 1pm to 3pm. Reposing at his sister's home, Mrs. Helen Bergin, Ballyroan Road, Abbeyleix, from 3pm on Sunday with removal at 7.30pm to The Church of The Most Holy Rosary, Abbeyleix, arriving at 8pm. Requiem Mass on Monday at 11am. Burial afterwards in the adjoining cemetery. Family flowers only by request. Donations, if desired, to St. Patrick's Cheshire Home, Tullow.

The death has occurred of Margaret Fitzpatrick (née Phelan), Dromard, Clonmore, Templemore, Co. Tipperary and formerly of Shanboe, Borris-in-Ossory, Co. Laois) - November 23rd (peacefully) in the loving and excellent care of the doctors, nurses and staff of the Regional Hospital, Portlaoise and previously in the care of the Matron and staff of the Villa Maria Nursing Home, Roscrea; dearly beloved wife and best friend of Joe, much loved and cherished mother of Martina and Brendan, adored grandmother to Grace and Cal, sister of the late Ann (Treacy) and Jim. Margaret will be very sadly missed by her family, her loving son-in-law John, her dear brothers Mick, Paddy, Joe,sisters, Mary, Angela, Bernie, Josie, Pauline, brothers-in-law, sisters-in-law, nephews, nieces, grandnephews, grandnieces, extended family, friends and neighbours.

Reposing in Grey’s Funeral Home this Sunday from 5pm to 7pm. Removal on Monday morning to St. Anne’s Church, Clonmore for Requiem Mass at 11.30am. Interment in St. Joseph’s Cemetery, Templemore afterwards. Family members' flowers only, donations, if desired, to the order of Carmelite Sisters C/o Grey’s Funeral Home.

The death has occurred of Josephine Ryan, St Martha's Nursing Home, Bansha and late of Ridgemount, Ballymackey, Toomevara, Tipperary. Josephine died peacefully in the care of South Tipp General Hospital. Predeceased by her brothers Michael and Patrick, sisters Bridget King and Mary Hayes. Remembered with love by her nieces and nephews, extended family, relatives and friends.

Funeral Mass on Sunday at 9.30am in St Joseph's Church, Ballinree. Burial afterwards in the adjoining cemetery.