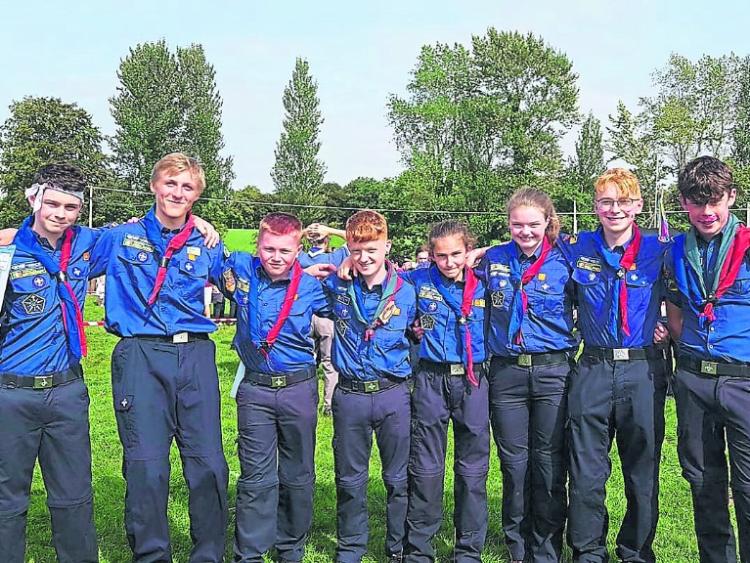 The team in uniform following the closing ceremony

Having qualified from the Slieve Bloom Scout County (Laois, Offaly and North Tipperary) the 8 person Patrol lead by Caoimhe Dooley (Patrol Leader) headed to Pallaskenry in Limerick on Thursday August 16th to take part in Scouting Ireland’s National Campcraft Event (“The Phoenix”).
The Phoenix is a huge test of the full range of skills from Camping, Construction, Survival, Cooking, Emergencies in addition to the Teamwork and Leadership skills.
With some 90 teams taking part in the National Finals representing over 550 Scout Group’s around the Country from all 32 counties, coming in the Top 10 is a huge achievement for a Group of Teenagers.
Arriving to Pallaskenry early on Thursday morning; the team were anxious to get started.
Ten hours of intense site build followed barely stopping for the thunder showers that broke the day up. That evening the Patrol were tested on their cooking skills and had some down time to meet other participants.
On Friday the Patrol took part in a series of backwoods challenges; including building a Coracle and Bivvy Shelter.
That evening the main meal of Bacon and Cabbage/Turnip was cooked on an Open Fire.
Saturday was intense with 5 hours of bases challenges where the Patrol had to take part is some 20 individual challenges.
Saturday evening the Patrol had some relaxing time and then all too soon Sunday arrived and it was time to pack-up and complete the Final Inspection.
The team of Caoimhe Dooley, Eimear Ramsbottom, Stephen Lown, Leo Condron, Donnacha McPherson, Darragh Rigney, Cian Wakefield and Krzysztof Noj did themselves, their family, Scout Group and community proud.