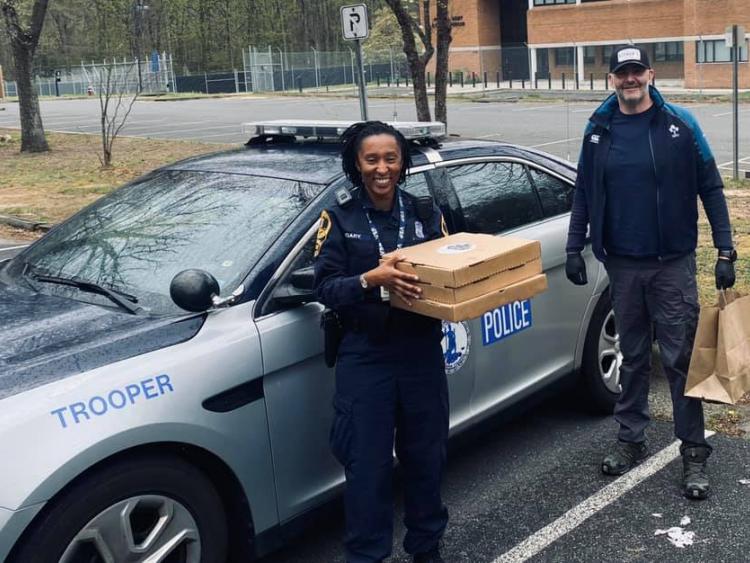 When he’s not busy patrolling the streets of Washington, Metropolitan police officer Mark Kirwan is shoulder to shoulder with his restaurant's bar staff serving up dinners to be handed out to frontline workers free of charge.

Roscrea born Kirwan has lived in America since 1993, his first taste of the US coming via a J1 visa. In the intervening years he held down a number of jobs including working for Guinness in the States.

“I’m the only Irish person in the police department in DC,” he says proudly, without so much as a hint of an American drawl.

“I get home once or twice a year, especially if there’s a big Munster rugby match on. I’m still very much a Tipp man despite being here so many years.”

He applied to join the police following 9/11 after seeing the devastation it caused throughout the country and felt he wanted to “do something and give back.”

Within a few short years, he had worked his way up the ranks to a member of the forces Special Threat Assessment team and since 2006 has been a central figure in dignitary protection, including working as part of the Taoiseach’s detail team during official state visits to Washington.

In 2010, he opened his first bar, Samuel Beckett's Irish Pub, in Virginia followed by Kirwans On The Wharf, located in Washington DC.

He closed both bars on March 15, days ahead of an official lockdown announcement, as he didn’t want to put any of his staff or customers in harms way.

His staff come from all over, including many Irish from Cork, Limerick, Wicklow and Tipperary, not to mention the influx of J1 Visa holders who head West during their summer holidays every year eager to experience a sense of adventure.

“It was a tough decision to make because between both bars there were 138 staff but I felt the health of the staff and patrons was paramount,” he explains.

He retained eight members of his team who have been working making hot dinners which Mark delivers to key frontline workers every night after his own police shifts.

Any monetary donations from the public towards Mark’s meal drive have also been matched by the police officer to ensure his daily food drops to key frontline staff can continue to operate.

A separate GoFundMe account has also been organised with 100 percent of all proceeds raised going towards laid off staff.

“It was very hard telling my staff we were closing and we really are trying to do everything we can to help them. This fundraiser will hopefully go some way towards that.”

“If we all pull together, we can get through this,” he says.

To donate to Mark's Food Drive visit @Kirwansonthewharf or @samuelbesckett110 on Facebook.