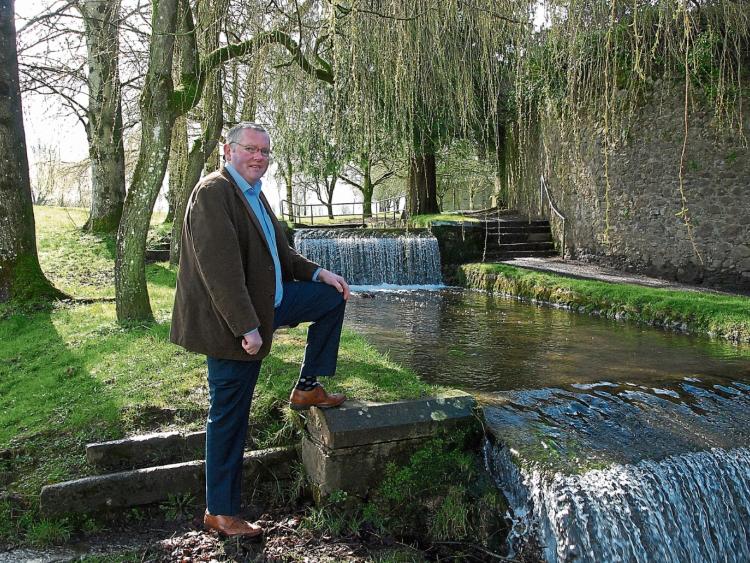 Derek Russell of Roscrea Stands Up

In 2014 Roscrea witnessed a watershed moment in the town’s modern history, when an impromptu march on the local Garda Station by the townspeople captured the attention of the nation and focused the national media spotlight on Roscrea.

Remarkably, at the eye of that intense media storm was a soft-spoken and unassuming man, neither tainted or restrained by any political persuasion and someone most unlikely to find themselves the spokesperson of what almost became a national campaign to rid rural towns of the scourge of illicit drugs.

On June 21, 2014 Derek Russell, a local delivery driver for Stapleton’s Bakery, was preparing for a public meeting he arranged in Roscrea.

The meeting offered many concerned local people an opportunity to discuss the worrying increase in drug related anti-social activity in Roscrea and was planned for the town’s Abbey Hall at 8pm.

The event wasn’t any more heavily publicised than past public meetings and so nobody expected a particularly large crowd - hence only 30 seats were set out to accommodate the anticipated audience.

However, when over 500 very animated and vocal townspeople from Roscrea and surrounding areas arrived Derek knew immediately “something serious” was unfolding and was overcome by an immediate moment of intense self-realisation that it was he who had opened the floodgates.

Resulting in an impromptu march from the Abbey Hall to the Roscrea Garda Station, and unknowingly Derek began a chain of events that led to rural communities all over Ireland looking to Roscrea and him for leadership.

Derek, standing shoulder-to-shoulder with the local Garda Sergeant, was standing before local people venting their upset at the front door of Roscrea Garda Station, attempting to persuade them to stop blocking the town’s Main Street and to disperse to preserve order.

In 2014 a cluster of suicides in the town among young people caused alarm among parents and a slow burning sense of panic had been slowly building among parents for over a year before, which was suddenly manifested in an outpouring of anger when parents in Roscrea began marking the streets with paint and pleading for the Gardaí to step up their fight against drugs.

It was a flashpoint in his life and in the story of Roscrea and one that has led to several far-reaching positive consequences and continuing work that although might not be apparent on the surface, carries on behind the scenes making life changing differences for people struggling with mental health problems and addiction.

When the dust settled Roscrea became a very different place, but the personal cost for Derek, who had gone so far as to pay over €17,000 of drug debts for people with his own money in attempt to extricate them from the clutches of drug dealers, had been significant.

Taking on the challenges of helping others cope with seemingly insurmountable problems had a toll on his own mental health, as helping people with problems far beyond just financial issues and on an existential level carries a heavy emotional burden for a caring person.

The event led to the creation of the still very active Roscrea Stands Up group of volunteers and the deployment of extra Garda resources to the town and today Derek is at the centre of a support network helping people from all corners of the country and is especially qualified to offer help.

The genesis of the story stems from Derek’s love of sport and how he is so well known by almost every family in Roscrea and all surrounding areas.

Derek has been invited to and attended 191 full weddings - attending 23 in one year in 2012! He has been Best Man six times and given away three brides and these astounding numbers reveal a glimpse into how incredibly popular he is in his hometown and how he is uniquely placed to keep a finger on the pulse of what is happening in the area.

A member of several local sporting organisations, one of Derek’s loves is the fast paced game of badminton - a sport he enjoys immensely for its nurturing of quick reflexes and quick thinking and through his involvement in the Country Club he began hearing about the tragic deaths of several local young people and one young man, known to him through the club, had tragically ended his life.

The news shocked Derek to his core and he found that when trying to explain the tragedy to older people among the community they simply could not fathom how or why younger people were taking drugs at all, while the younger generation were reluctant to open up about it. In an attempt to bridge that gulf between the generations, he realised somebody needed to step forward and create a forum for people to communicate their feelings and attempt to understand the problems the town faced.

But he never imagined how his idea would mushroom into a movement and explained his only public performance of any kind before taking to the national stage was his brief appearances on the stage of the Citeaux Hall with the local drama group.

An Offaly man by birth, Derek arrived into the world in 1972 and his childhood story recalls a time when small rural parishes built on neighbourliness were the rock on which local families flourished and with his brothers Noel and Keith, sister Fiona, Derek enjoyed a very happy childhood in the beautiful bucolic setting of Fanure near Roscrea - an area best known to people for the Fish Farm on the Little Brosna River.

Ballyskenach in County Offaly is Derek’s home club and he recalls the local sports club as playing a major role in his formative years. His home parish, which straddles the county border, has become a more built up area now, but Derek has maintained strong links with almost all the families from the area where he grew up.

Located nearby is Mount Saint Joseph Abbey and farm, where Derek took his first job working alongside the monks caring for the animals and tending to the fields - something which left an indelible positive impact upon him. “Brother Dominic and

Father Anthony were very kind men who taught me a lot of valuable things about the world”, he recalls.

His schooling in Dromakeenan was where he first met Principal Tom McCarthy, who instilled a love of sport, particularly hurling, in Derek and treated the game with the same level of reverence as any academic subject.

After only one year in Roscrea Vocational School, Derek left school to take his first job - something he was happy about as the books were never his passion and the world of farming appealed greatly to him.

However, tragedy in his childhood years profoundly deepened Derek’s appreciation of family when his father Billy died aged only 36 and his mother Kathleen died eight years later aged only 45. These awful circumstances led to an incredibly strong relationship between his brothers and sister - bonds which sustain Derek today and are maintained through daily phone calls and regular contact.

“Fiona keeps us all together, she is very good to my son Stephen and we are very strong - family is everything to me and we all keep in touch all the time” Derek said.

Travel has become a major passion and Derek has visited a number of European cities and travelled the famous US Route 66 by Cadillac. Today he lives with eight-year-old son Stephen in Glenncarrig.

Derek regularly hosts visitors for a fireside chat and cup of tea, where anyone is welcome to come and discuss any issues weighing on their mind.

“I would never have called that meeting if it wasn’t for my own depression - it was out of character for me to do something very public like that and this is often what people do when they are under pressure”, Derek said.

“The ripples of tragedy after the suicides stretched out and touched everyone in the community and I knew this was something serious when I looked outside the door the next morning and there were vans from TV and radio stations outside. It touched people all over the country, in towns where the same thing was happening and people were afraid and didn’t know what they could do.

“The real changes happened when Detective Oliver Henry came to Roscrea, who was a real ‘Mr. Fixit’ and made a huge difference and with the help of Roscrea’s resident groups and official help from organisations like the Mid West Regional Drugs Taskforce we made a real difference. We brought the suicides to a halt and if we saved one life and one family from undergoing that tragedy we succeeded”, Derek said.

“In Roscrea now we have an excellent team of Inspector Ailish Myles, Sergeants and Gardaí working in the town. Our residents committees are very active and strong and there are so many great organisations and groups for our young people to get involved in - the town is in a very good place and we have all learned to communicate better with each other, which is the key to success. Communication is everything”, Derek said.

Today the group Derek established and Chairs since the watershed meeting on that fateful warm summer night in 2014, Roscrea Stands Up, continues to work hard behind the scenes, away from the media spotlight. Looking to the future, Derek feels Roscrea’s best years are ahead.

Speaking to the Tipperary Star in the midst of uncertain times as the Covid-19 pandemic radically changes how people in Roscrea live their daily lives, Derek feels that when things return to normal, which they will, Roscrea will do well from tourism and move into a new positive chapter in the town’s story.

“Roscrea needs a hotel in the town centre again for visitors and we do have some challenges, but ones which can be dealt with. We have everything we need to make our town one of the best places to visit and stay. We have some of the best historical sites in the country in the town and the best people are in Roscrea”, Derek said.