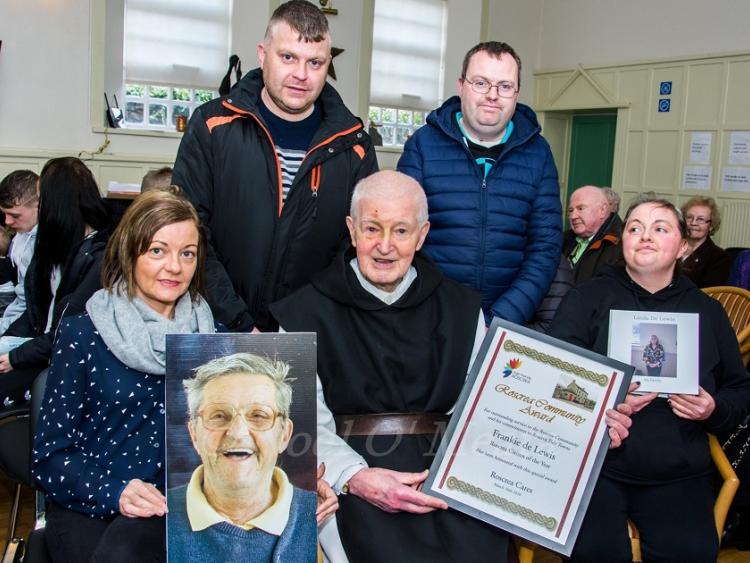 Pictured are Frankie's four children Anne, Patrick, Francis and Linda with Fr Laurence Walsh at the very poignant ceremony celebrating Frankie's life and his devotion to his hometown of Roscrea

When Frankie's family started a recent journey of discovery into their family tree they had three wishes - to find information about Frankie's mother; to ascertain where she is buried and if possible to find a photograph of her.

As was the custom of the time children were not told about their mother's story, their family or their backgrounds and throughout his life Frankie believed that his mother died during his birth.

A search for his birth certificate revealed that he was born Francis Day Lewis to Constance Day Lewis, a Dubliner in the Bethany Home - which was a Church of Ireland run Mother and Baby home in Rathgar. Constance was 25 at the time of Frankie’s birth and he was born the year the second world war erupted.

These were very bleak times and Frankie grew up in one of Mrs Smyly’s Trust Homes for Boys in Dún Laoghaire. In the mid 1950s he and another boy came to work as farm hands for Mrs Letitia Stanley in the Valley in Roscrea (now Bernie Larkins House).

Incredible as it may seem there were a number of farmyards in this area and the backgardens of the houses on Grove Street and Bunkers Hill were used as animal pens and herds of cows were driven up and down the Convent Hill and Templemore Road twice a day.

After a number of years he moved to Stanleys in Streamstown and was a familiar visitor in many of the local houses, where he loved a get-together and sing-song and he also became a frequent visitor to Mount St. Joseph's Abbey, having decided to convert to Catholicism.

Mount St Joseph played a major part in Frankie's life and he personally took responsibility for opening the Sacristy door for the celebrant at Mass. When Frankie moved into Roscrea town in the 1960s he worked in the Central Hotel with Mrs Corry and when he took up employment in the meat factory, he took up residence with Mrs Walsh in Grove Street.

Having found his mother's name it was possible to search for her death certificate and Linda's investigative work found she died in 1968 and had been living in the Royal Hospital in Donnybrook prior to her death.

A trawl of Dublin graveyards revealed that Constance was buried in Mount Jerome with her father Frederick and her sister Ida and Ida’s husband also called Frederick. Constance had never married and had no other children.

The 1911 census listed Josephine McDonagh as her mother and revealed an older brother named Frederick.

Searches in Ireland and England failed to reveal further information, but a stroke of luck when checking ship records unearthed a family of Day Lewis’s who emigrated from Liverpool to Massachusetts in the early 1950s. These records gave names and dates of birth, so the family were confident they had found Constance’s older brother.

Contact was made with this family and even though they had never met Constance or her Sister Ida, they had photographs of both taken in 1936, three years before Frankie was born. They also revealed Constance had two other brothers, Francis and John, who died in the 1940s.

Research of Frederick, Constance’s father Frederick and his siblings, revealed that his brother had been a rector in County Laois but had returned to England after his son Cecil was born. The family confirmed that Cecil Day Lewis, the renowned author and British Poet Laureate, and Constance Day Lewis are first cousins and their fathers are brothers. Furthermore it reveals that Frankie De Lewis’ grandfather and Daniel Day Lewis’ grandfather are brothers.

Frankie worked tirelessly with Roscrea Tidy towns for many years and was involved in several projects and developments of gardens - but it was his early morning weekend work that Frankie is most noted for. While Roscrea slumbered Frankie was out ensuring that Roscrea was clean and presentable.

Winter and Summer, he never failed to complete his task and the community felt it important to mark this level of commitment and community spirit and so on March 10 Frankie's wonderful contribution was acknowledged by many of his friends, Tidy Towns members and the community.

Members of the De Lewis family were present in the Age Friendly headquarters in Roscrea Courthouse to accept the award from Fr. Laurence Walsh on Frankie’s behalf.

Many of those present spoke about Frankie’s contribution to the community and his daughter Linda sang his favourite songs and Fr. Corbett led those present in prayer for Frankie who was ill and could not be present. His family were able to tell him about the event and show him his award.

Sadly, shortly after the celebration of his life, Frankie passed away on Friday March 13 and joined Eileen and his mother Constance.