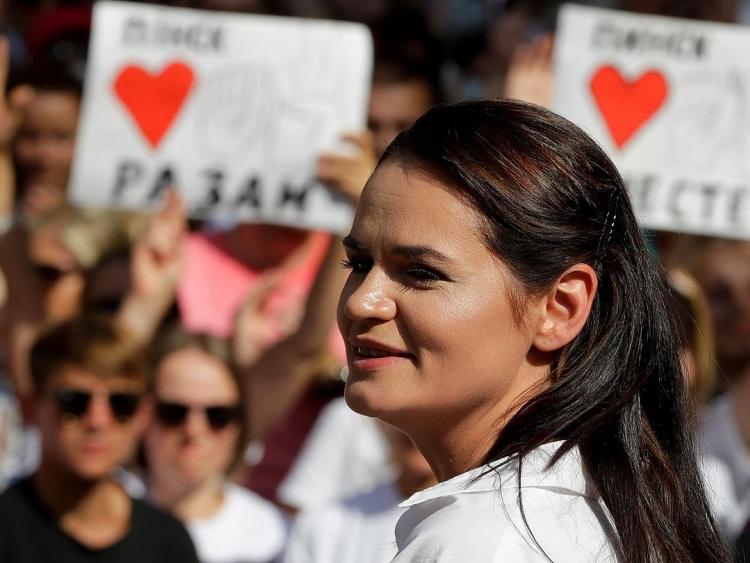 The remarkable story of Svetlana Tikhanovskaya has captured the imagination of people around the world in recent weeks, and Roscrea plays a significant role in her background.

Having spent several summers in Roscrea with the Chernobyl Lifeline project, Svetlana Tikhanovskaya made many friends and touched many lives in her time in Roscrea - believed to have been some of the happiest times of her childhood.

Roscrea played a pivotal role in the success of the Chernobyl Lifeline project and the bonds forged between families from Belarus, Russia and Ukraine remain very strong.

Chairman of the Chernobyl Lifeline project and Roscrea man, Henry Deane, knows her personally and maintained contact until only recently, when her rising star in the difficult world of Belarusian politics demanded she not communicate with people in the west as freely as she often would before.

Speaking to RTÉ Radio One on Monday, a clearly very proud Mr Deane recalled that as a child she was not very political, but a very intelligent, warm and compassionate person.

Although unsuccessful in the election last week, Svetlana has made an indelible impression in her home country, making history and breaking down the barriers to freedom of speech and expression by challenging incumbent Alexander Lukashenko - the man commonly referred to as “Europe's last dictator”.

She first came to Roscrea aged 12 and Mr Deane recalled she came from a very poor family and was very grateful for the chance to visit Ireland.

Tikhanovskaya was one of the “Chernobyl children”, whose health was either directly or indirectly affected by the radioactive fallout of the 1986 nuclear disaster in neighbouring Ukraine and whom Irish families hosted for respite and recuperation.
Henry Deane, 72, and his wife Marian know her as “Svyeta”, and when she first arrived at their home in Roscrea in the mid-1990s she was one of two children who arrived that year.

“Svyeta was a similar age to my daughter Mary, and she fitted right in,” Mr Deane said, who has travelled to Mikashevichi, her home village, after he was involved in funding the charity. Mikashevichi is 30 miles north of the border and had been severely hit by the nuclear disaster in Ukraine.

“Her English was so good we kept her as an interpreter” Mr Deane said and recalled Svetlana later returned to Roscrea after finding employment in a local factory, which she used to fund her education.

Mr Deane also recalled that most children who visited Ireland as part of the Chernobyl Lifeline project feared speaking about the political situation in their home country - but young Svetlana was not and would speak openly about her feelings and the plight of her country people.

Last July Belarus' Central Electoral Commission (CEC) announced the list of candidates registered for the upcoming presidential elections and unexpectedly, among those who made it, along with incumbent President Alexander Lukashenko, was Svetlana Tikhanovskaya, a former English teacher and a housewife with no prior political experience.

The 37-year-old mother of two has been receiving threats over her decision to run in the elections which were held last weekend, and forced her to send her children out of the country, accompanied by their grandmother.

Tikhanovskaya has been honest about her lack of experience in politics and has said she had made the decision to join the presidential race spontaneously. It followed the arrest of her husband, Sergei Tikhanovsky, a popular Youtube blogger who had tried to register as a candidate.

Tikhanovskaya had hoped this would draw attention to his case and help get him released, but had not really expected the authorities would actually allow her to run.

Within days of her registration, Tikhanovskaya managed to gather massive crowds at her rallies across the country.

In Minsk, an estimated 63,000 people showed up to her campaign event on July 30 - unprecedented support for the opposition.

Thousands also attended her rallies in smaller provincial towns, where traditional Belarusian opposition has struggled to establish a foothold in the past.