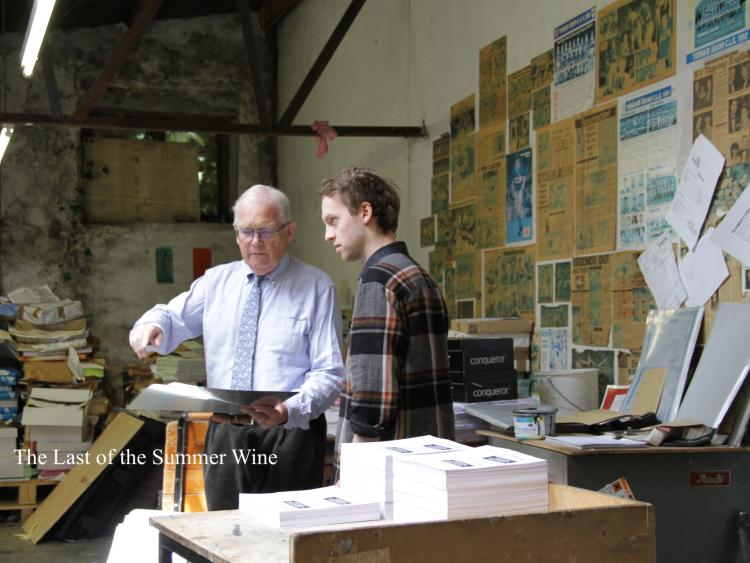 The story of any place is also the story of its people. Artist and film maker Therry Rudin’s beautifully and sensitively filmed documentary “Last of the Summer Wine” gives us an understanding of the town of Roscrea through the views and memories of several of its senior residents, witnesses to many changes over the years.

The story of any place or its communities is usually one of major events or outstanding individuals. But history rarely highlights the role of ordinary people, who are the backbone of any community, be it at national or local level. While folklore and oral history have gained in popularity in recent years very few communities are benefiting from this kind of research.

So the documentary The Last of the Summer Wine, reflecting the views of some senior citizens in the town of Roscrea, very much adds to our understanding of our local place.

Even though Roscrea is very fortunate in being one of the best researched communities in the country, from historical to folkloric research, there are many aspects which remain untouched and one of these is an individual’s personal story.

Therry Rudin, in The Last of the Summer Wine, features for the most part, the personal recollections of Liam Maloney, who was born in the grounds of Dungar Cemetery in 1941 and was employed for most of his working life in the drapery trade in the town.

The interview with Liam, which took place at his home at Dungar cemetery, was carried out in a relaxing and convivial atmosphere, alongside his pet dog which lay on his lap throughout the interview.

In an answer to a question on how much change he had witnessed in his lifetime he recounted his experience of seeing the advent of many significant events including: electricity, running water, battery operated devices, the increasing role of the car and many other aspects of modern life.

Other contributors in the documentary, including a local printer, photographer and shop owner also recounted their personal insights into how they have perceived Roscrea has changed over the years.

A common theme here is the sense of loss in terms of employment and how, many enterprises including factories, the local hotel and many shops are now but a distant memory.

But other contributors also pointed to the positive aspects of life in Roscrea, such as the strength of community spirit and the wealth of historical features which have the potential to make the town an attractive choice in the development of tourism.

The idea of the last of the summer wine is of course a reflection on the role of senior citizens within our community and in the documentary the importance of friendship and social contact is particularly poignant.

The camaraderie of meeting in Pauline’s coffee shop is beautifully highlighted and the sense of relaxing with friends is seen as a positive focus of any age group, but especially the elderly. The pleasantness of regularly meeting for coffee and a chat, where everybody is welcome, is almost a central theme of the documentary.

The documentary also captures in visual form many aspects of the modern town, which will no doubt change over the coming years. This includes aerial views of the town and features of the old Antigen factory which was once an economic powerhouse within the town.

The streetscape and general business life of the town are also reflected in these visual images. In this regard the town is certainly portrayed in an attractive and positive manner, albeit filmed at a time of very clement weather.

But perhaps one of the most encouraging features of this documentary is the fact that young people carried out the interviews and this in some ways created a bond between the wisdom and stories of the aged and the curiosity of the young.

While The Last of the Summer Wine can be looked at from different points of views, folkloric, oral, artistic and historical, Therry Rudin, a native of Switzerland, who has made Roscrea her home, has shone a small light on a tiny aspect of Roscrea life – but in so doing has created a precedent, which hopefully others will follow, that will prove to be an invaluable resource for generations to come.

The film is dedicated to the late Liam Maloney who features strongly in the film.

Although a common theme is the sense of loss, both in terms of employment and the demise of various businesses, the strength of community spirit and the rich historical heritage point to a positive potential for the town, reinforced in the fact that young people carried out the interviews, bridging the past, present and future.

The film was originally due to be shown in Damer House Gallery, Roscrea as part of the schedule for 2020, but due to Covid-19, the gallery is closed and will not re-open until April 2021.

However Nenagh Arts Centre is delighted to be able to present this moving film on their website running until January 18, 2020.

To watch the film visit nenagharts.com.