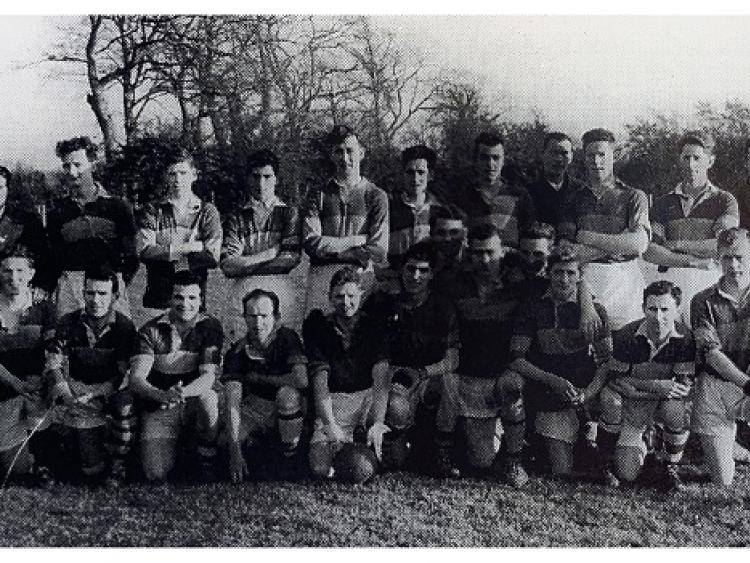 A Brief History
Inane Rovers is the only solely dedicated club to Gaelic football in the North division of Tipperary.
Serving the town of Roscrea and surrounding parish in the North Eastern end of the county, the club was founded in 1950 by a group of men whose passion for our national game motivated them to promote and develop the sport in an area dominated by hurling.

As the clubs first president T.F Gunnell once explained, ‘young lads from the area would gather in the fields surrounding the lodge of Inane House on the Limerick side of Roscrea to discuss the items of the day and test each other’s skills during a kickabout.’

These fields and lodge are represented in club crest along with the lamppost on the Monastery Road where the first meeting of what was to become Inane Rovers took place on a winter’s evening in 1950.

The first formal meeting was held in Grimes’ Hotel (now Bernie’s Supervalu) on January 16, 1950 and the subsequent first match played was to defeat Clonmore in a challenge game at Clonakenny on a score line of 4 – 7 to 0 – 4.
Inane’s colours are green and gold and the jerseys are modelled on the famous Kerry style. However an interesting detail from the club's past is that this was not an arrogant statement from the founders but much more a result of chance. A supplier of sports equipment in Roscrea at that time was J.J. Dooley of Castle Street. J.J. had a set of jerseys in stock that had been ordered by another club in Tipp. That club never turned up to collect the jerseys and as the story goes J.J. offered the set of green and gold jerseys to the club at cost price, to be paid for ‘whenever you can’.
And so the clubs colours were born and have been worn with pride by the generations of players since.

County Junior A Champions
Inane regularly competes in the Junior A grade and they have won numerous Junior A North titles along with a North Intermediate title.

However, success in county finals at adult level has been difficult to master. It is because of this that the clubs two County Junior A Championship winning sides hold a special place in the history of this little club. The first of these titles was won in 1961 by defeating Golden-Kilfeakle in the final.

Eleven years after the founding of the club this was a much celebrated achievement. Captained by Michael Nolan this was a team full of talent and experience as a large number of this squad had won three Tipperary County Senior football titles previously with St. Flannans in 1958, a North Tipp selection in 1959 captained by Roscrea’s own Leo Dooley and with St. Flannans again (a combination of Inane, Moneygall and Toomevara) in 1961.
Indeed these three victories illustrate the talent in the clubs 1961 Junior A team as Inane provided the majority of players in all of these selections.

It would be 53 years until Inane’s second County Junior A title would be won. In 2014 that long gap was bridged when they defeated Seán Treacy’s in Holycross. Captained by Keith McMahon this team was also full of talent with many of them representing Tipp at various grades.

In common with the 1961 team, five of the 2014 squad had won a County Tipperary Senior football title in 2011 with Thomás McDonaghs, a combination of clubs from the eastern side of the North division. The club are in no doubt that the 2014 team could have challenged for provincial success were it not for the fact that only seven days later they had to travel to Newcastlewest for the Munster quarter-final versus Limerick champions Glin. After an epic battle Inane lost by the narrowest of margins. Glin went on to also be narrowly defeated by Kerry and subsequent All-Ireland champions Brosna in the Munster final. However, the 2014 team did both the club and the people of Roscrea proud with their dedication and commitment to ending that fifty three year wait for county success.

Recent Success
Throughout their history, Inane have been hugely successful at underage level winning far too many North titles to mention; however notable successes in recent years were in 2012 when the club won North and County titles in Under 16 B and Minor B which is an unusual achievement for a club from the North division. 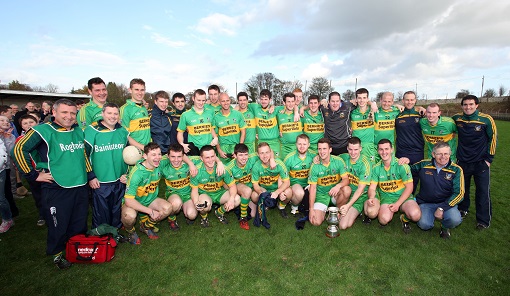 It is also rare that a team from the North wins an underage football County A title, however this is exactly what the under 14 team did in 2016 when defeating Clonmel Commercials, one of the powerhouse clubs in Tipp football.
In 2018 the club had a unique achievement claiming a clean sweep of underage North A titles including, U-12A, U14A, U-16 A and Minor A, a feat that has only been accomplished once before.

Promoting Gaelic Football
In such a staunch hurling area promoting Gaelic football is not always easy or popular. The club would like to acknowledge all the volunteers over the years who have given up their time to coach, serve as an officer or help in any way they could.
Thanks also to the local schools and their teachers including Dromakeenan N.S., Corville N.S., Sacred Heart N.S., Scoil Eoin N.S. and more recently St. Cronans N.S. for their enthusiasm and participation in the clubs annual Liam Carson Memorial Primary Schools Blitz. Coláiste Phobail Second level school for their promotion of gaelic football and for allowing the club the use of their facilities and of course Roscrea Hurling Club for the use of their facilities.

The promotion of the game in Inane would not be possible without the continued support of Bernie’s SuperValu Roscrea. Their commitment to local causes is second to none and the club expresses its gratitude in the most sincere terms. Go raibh maith agaibh Bernie agus Brian.

There are too many individuals to mention who have contributed greatly to Inane over the years however the club are confident people won’t mind if special mention is given to Ciarán McNicholas and Jack Pyne. Both men were completely dedicated to Inane Rovers as players, mentors and officers for over 60 years. Such prolonged commitment to any cause but in particular Gaelic Football in North Tipperary is a standard few have met and the club will be forever grateful for the legacy both men leave behind. Ar dheis Dé go raibh a n-anamacha.

Into the Future
This article has only given a snapshot of the rich history of Inane Rovers as anyone who has read Ciaran McNicholas’ comprehensive book on the first 50 years of the club (published in 2000) will testify. The future holds many challenges yet to be faced by a club as small as Inane.

If anyone in the area is interested in volunteering in any capacity (coaching, administrative, etc.) they are more than welcome to join the small but dedicated Inane family. Help the club to harness the undoubted Gaelic football talent there is in Roscrea.
Please make contact with secretary.inanerovers .tipperary@gaa.ie or
Alan Fogarty (0868827242) (Vice Chairman).

Finally, everyone in the club would like to congratulate the Tipperary Senior Footballers, David Power and his backroom team on their Munster success last year. Their fantastic win was a huge boost to anyone involved in football in the county. It was a day that will live long in the memory and hopefully inspire the next generation of footballers in Tipp.

A Friend we have lost recently - Jimmy Cunningham

A tribute by John Evans.
Taken from us too early in May 2019 after a battle with illness, Inane lost one or our finest. Jimmy Cunningham served as a player, mentor, physio, officer and loyal supporter to the club all his life. He also worked as a masseur with many Tipperary football teams especially under the stewardship of former manager John Evans who sent us this dedication to Jimmy:
“It's a privilege for me to write an appreciation of Jimmy, I would need a book to encapsulate his full character and expertise.
“When Jimmy joined me as a masseur with the Tipperary Senior Football team I also got a loyal friend and confidant. His character brought happiness to the dressing room at a time when Tipp were pushing the boat out and going on a great successful voyage. The team were pushed way beyond their comfort levels which brought aches and pains to the players.
“Jimmy was our life saver with his gifted hands and charming personality he soothed the most painful bodies and minds. This resulted and enhanced huge success for the team with successive promotions through Div.4 to Div.3 and up to Div.2. But his skill was so appreciated by me, I further loaded him with the U21 team as well as the Senior team but he never complained and just rose to the task with his beautiful smile. 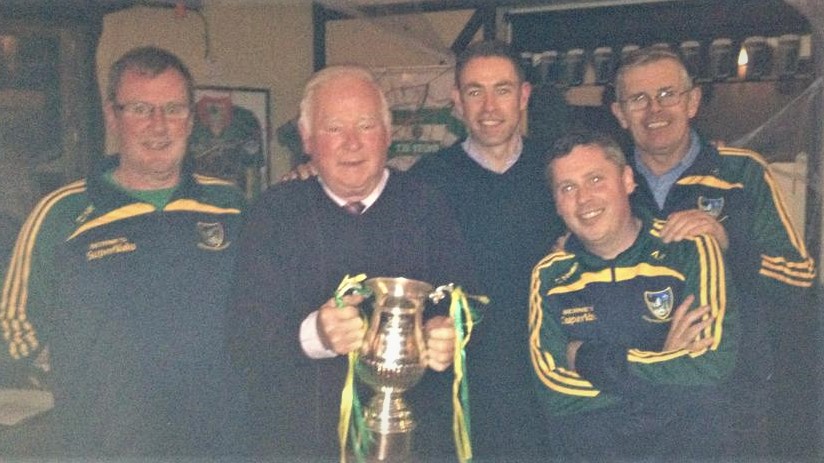 “He was the voice in the dressing room when I wasn’t present for these young players, giving them encouragement, advice and guidance when the U21 team won their first Munster U21 title. I always knew Jimmy had such great loyalty to his club Inane Rovers as he spoke about them with great passion over his 5 years with me.
“I changed Selectors, Trainer, Coaches, in my management teams but I never changed my Masseur, Jimmy Cunningham. He was exactly what I needed for Tipp and success. At Jimmy’s request it was an honour for me in 2010 to present medals to the Inane Rovers U-16 North Tipp championship winning side. It was a very enjoyable night and I would like to finish by wishing the Inane Rovers club who I know meant so much to Jimmy continued success in the future.