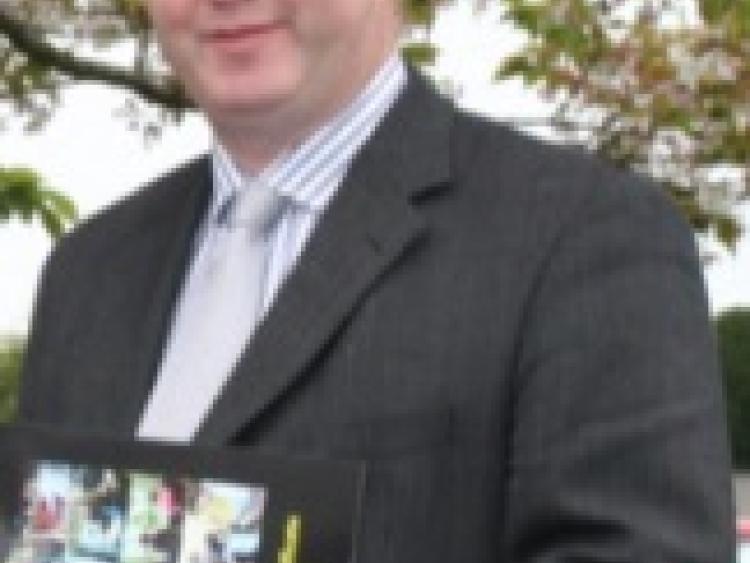 ‘A gentleman’, ‘A real principal’, ‘a very kind man’, ‘a man unafraid to get stuck into a project’, ‘Someone who gave whatever he was doing 100%’ ‘The best conciliator I have ever witnessed’, ‘You could be eating him one minute and laughing with him the next’, ‘We won’t see the likes of Ger again’ and ‘a friend’.

These are just some of the many comments from former students and colleagues of the late Gerard O’Brien. All of these comments flowed so naturally, so effortlessly from the heart; as natural and effortless as Ger’s own unique smile. When news broke in our Coláiste that Ger had passed away an air of stillness and sadness descended upon us. For there was a constancy to Ger. Even when he retired, we imagined he would be at home with Mary and Mark, or on some golf course, or planning his next trip to Alicante.

Even in retirement, it was a comfort to know he was not far away. So it made February 26 of this year all the more poignant, all the more real.

Ger’s story with our Coláiste began in June 1999 and continued until he retired on October 2015. He arrived as a fresh-faced 40-year-old full of enthusiasm and infectious energy. When asked was he in any way daunted about leading a new building program, blending three different staffs and caring for 900 students his reply was typical ‘Ah no, sure I’ll give it a go and I’ll do my best’ That Ger did and more besides.

Under Ger’s watchful eye, a new building program began. Some of his early achievements included the development of the CBS building across the field to accommodate boys and girls, the construction of a new toilet block on the CBS site, the construction of a new footpath between the CBS and Vocational School across the side of the hurling pitch so teachers and pupils could travel between both. Ger worked on a prefab village constructing of 11 portacabins brought in from Limerick which were installed in the lower car park and this was certainly not an easy job.

He worked on the renovation of the 1984 building to accommodate as many pupils as possible. During all of this the new building was under construction and a connecting bridge had to be built between the two buildings when the new building was finished. Ger oversaw all this work and it was done on schedule for September 1999!

One of Ger’s great attributes was he would see potential where others couldn’t. This applied to buildings as well as people. He also saw the completion of a new lunchroom, a new library and 4 classrooms, a new hurling wall, new offices for year heads and exam secretaries and new computer suites on a number of occasions to keep up with modern requirements. Ger was committed to the well-being of our students. The enhanced lunchroom was married with Ger’s introduction of lunch passes and free breakfasts for vulnerable students. The Oratory was the unused upstairs girls changing rooms. Now it’s a place where students can unwind and be fully present in the moment. Ger saw a need in our students physically, emotionally, mentally, and spiritually. Any building he took on was his way of trying to address that need - it was a practical expression of compassion. In short, Ger cared.

One of the initiatives Ger brought with him to Colaiste is the annual 2nd year trip to Manchester. It’s something former students often reminisce about. For a trip to Manchester in the early 2000’s was no mean feat. Leading over 100 students, over several busses, ferries, trips to Old Trafford, Alton towers etc was incredibly exciting for our students. The fact we sometimes took an occasional detour on the wrong roundabout or motorway made it all the more invigorating.

It certainly added to our storytelling about those tours. Ger himself would love this and indeed was prone to the odd embellishment now and then. But to see the pictures of Ger in Alton towers, arms in the air enjoying the rollercoasters is a treat. Ger believed in fun and bringing fun to students and staff. It was a key skill he used to endear not only himself to staff, but help us all bond with our students and each other.

Ger carried this sense of fun and comradery on social nights’ out (which he just loved) and on the Coláiste Golf outings, which he relished being part of. He was a great character and his infectious personality endeared him to all.

Gers values epitomised fairness, collegiality, kindness and in his own personal life, courage. Ger has inspired us to do better, be better and treat others with compassion and justice.

It was Ger’s ambition as Principal that not only would Coláiste Phobal be an academic college with outstanding exam results but that it would also develop a reputation for the development of pupils through sport and cultural events such as music and poetry.

He was immensely proud as Principal that on his watch he witnessed the development of these activities which did indeed give Coláiste Phobal the reputation it deserved. He was immensely proud of the introduction of the school Musical. He felt it was one of the best promotional events in the school calendar and made him so proud as Principal that he played a small part in getting it off the ground.

Two other communities that benefitted from Ger’s style of leadership were the PLC community and the staff community. Ger loved any type of developmental model in education. He was particularly delighted to support the PLC community.

In careful and constant planning with the PLC co-ordinator Ger successfully approved new and vibrant courses to the Coláiste. These courses were born out of the community needs, employment opportunities, and the fact Ger was more than open to advise and indeed criticism. Whenever mistakes were made or something couldn’t be delivered Ger would disarm us all with ‘I throw my two hands in the air’ said with a sheepish, yet sincere smile. It’s a particular gift in leadership that Ger helped people feel safe in his company. We knew that once a disagreement was aired, it would be left behind us.

Thus staff learned to appreciate that Ger’s leadership was very human, very real and at its heat very compassionate.

When staff members had to face hard times or difficult decisions Ger’s natural empathetic nature kicked in. Ger gave time to his staff and always kept his own values of compassion and natural justice at the heart of his dealings with his colleagues. Colleagues even if they were not agreed with, felt heard and respected because Ger valued being treated himself with kindness and respect, he certainly strove to do the same to others.

Ger was also very proud of the school Pastoral care and the work done for special educational needs. He showed particular empathy to the more vulnerable students and their struggles to attain an education.

He was extremely honoured to be appointed as Principal of Coláiste Phobal Ros Cré and served Roscrea and surrounding areas with distinction over the years. Ger always said that he had a successful time in Coláiste because there was fantastic work done by the three staff bodies in preparation for the amalgamation and over the years he was Principal but this was down to his enthusiasm, drive and good nature and his method of leadership that brought everyone along with him as a happy and caring family.

Ger often said after he retired that he was honoured to lead and work with so many talented staff over the years and he told many that he dearly missed the comradery built up over the years. This feeling was mutual for all of us who had the privilege of working with Ger in Coláiste.

There is so much more we could write about Ger. There is much more to him as a man, a husband, a father, a brother, a leader, a friend, a natural gentleman whose life was tempered by goodness and integrity.

One of the most heartfelt moments in the life of the Coláiste was on Monday 1st March when Ger and his family passed by in a funeral cortege and stopped at our school gates. It was fitting that as Covid restrictions lifted our 6th year students, who were in first year when Ger retired in 2015 were able to do a guard of honour for him, along with a large gathering of current staff, retired staff, former students, parents of current and former students, the school board of management, parent’s council and ETB members. Many tears were shed in that sacred moment.

Rest in Peace Ger. May the greens of Heaven be your well-earned reward and may we honour your memory by striving to keep your values alive.