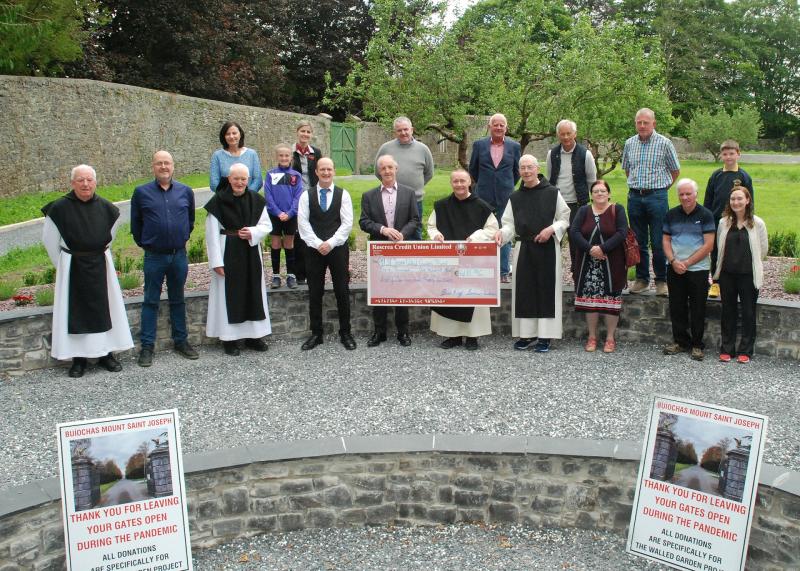 Pictured at the presentation of a cheque for over €6000.00 to the Mt St Joseph Walled Garden Project are the committee members of Buíochas Mount Saint Joseph

The funding was to give people a platform to thank the monks of Mount Saint Joseph, for leaving their gates open during the pandemic, as a place of refuge and peace, for the local community from the stress and worry associated with the virus.

The Prayer Path, and Esker walks, in the monastery grounds have proved to be very popular, and local people, in particular, are delighted to be able to enjoy these wonderful new amenities.

The GoFundMe was also facilitated by a bucket collection at Bernies SuperValu Roscrea, for those who preferred not contributing through an online forum.

In addition, some people opted to give donations directly to the committee.

The total raised amounted to €6,181.63, and was presented to Dom Malachy to be used specifically for the ongoing work in the Walled Garden Project.

A special presentation evening took place in the Walled Garden of Mt St Joseph recently. The weather was fine and all in attendance enjoyed a very positive evening which involved the presentation of the cheque, and a wonderful tour of the walled garden where the monks and Paddy Smyth gave all those in attendance a wonderful insight into how the project came about and the wonderful plans in the offering for the future.

Speaking on the night Dom Malachy said that the Monastery was very thankful to Seamus, the committee, and all those who contributed so generously to the fundraiser.
Fr Malachy made the point that we had all been through a tough time with the pandemic but thanks to the vaccines better days lie ahead.

Dom Malachy noted that there was never a question of the monastery considering the closure of its gates during the pandemic and he reiterated his thanks to everyone for their generosity.
Fr Aodhán echoed similar sentiments and invited Paddy Smyth to speak.

Paddy Smyth as mentioned spoke about the “Walled Garden” and existing projects and future projects and left all those in attendance very excited about the future and how the fundraising money will be put to use.

Séamus Doran then spoke and paid great tribute to the committee of, Brian King, Sean Hogan, Joe Moloughney, Matt & Pamela Landy, Mary Delaney, and Yvonne O’Rourke- Nolan for all their hard during the project, giving particular credit to Brian King CEO of Thurles Credit Union for overseeing the counting of money.

Seamus also thanked, Brian Colclough and the staff at Supervalu Roscrea for their commitment to the fundraiser, as well as Niall O’ Meara, Roscrea Signs, and Ger Downey, Corville Stores Roscrea, for their generosity.

After the event, Brian king noted that it was a fine gesture by Seamus Doran to establish the committee and deliver on a project that yielded over €6000.00 which Brian noted was a significant amount of money.

Brian concluded by saying he has worked on numerous projects with Seamus and that his drive and energy have certainly yielded a lot of positivity in the community which is so very important. All the fundraising committee wish Mt St Joseph every success for the future and thank the hosts most kindly for their time and hospitality.