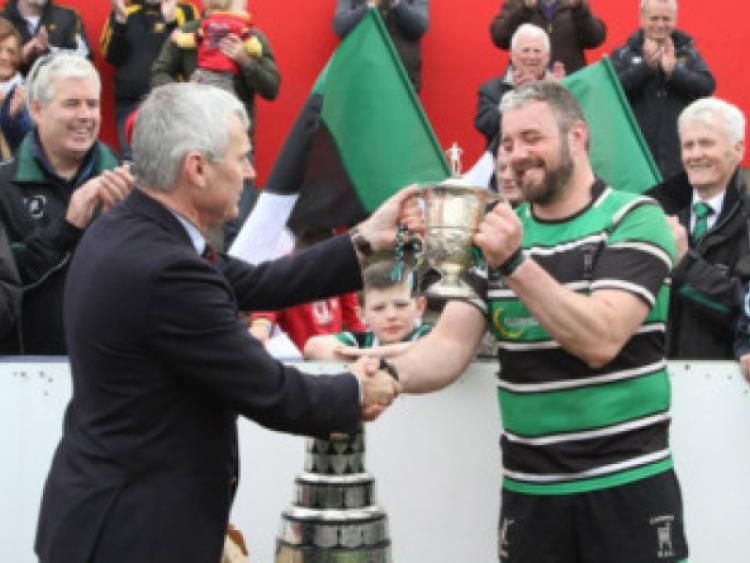 History was made in Cork’s Musgrave Park on Sunday last when Clonmel defeated Tipperary neighbours Clanwilliam to win its first ever Munster Junior Cup.

History was made in Cork’s Musgrave Park on Sunday last when Clonmel defeated Tipperary neighbours Clanwilliam to win its first ever Munster Junior Cup.

Coming on the final day of the domestic rugby season, the Clonmel 1st XV capped off a strong league performance, which saw it finish in second place, to add the much coveted Junior Cup silverware to the year’s accolades.

Clanwilliam’s first final in 67 years might have come as a shock to the rest of the province but they certainly didn’t look out of place.

A late 80th intercept try swung the scoreline one way, when minutes earlier a potential penalty try was in the offing for Christy Neilan’s men and a nail biting finale on the cards.

At no point should anyone be in any doubt though that this was Clonmel’s day. They played some fantastic rugby when it mattered, ruthless finishing and overcoming plenty of obstacles including spending the last five minutes of the game with 13 men and defending their lines heroically.

Two quick fire tries in the first half meant they lead 10-9 despite having less of the ball and slightly lagging in the territory stats but their second half display was a big step up. Ball retrained well and used cleverly. Young 18 year old scrum half Alex Sheehan had a storming game in that regard, as did Morgan Lyons. The half backs controlled the day.

To start, it was all about Clonmel, an early turnover and a searing break from the energetic and powerful Frankie Quinlan, who would be pivotal throughout, set up the field position. One phase later, full back Conor Cooney scurried over on the short side and the first score was on the board for a 5-0 lead.

By minute 13, Clanwilliam had overhauled the deficit thanks to two superbly struck long range penalties by the ever important Brian Kissane. That settled the men from Tipperary town and it also reflected a good spell of possession and territory after the poor start.

Crucially however, the conceded again at the midway point of the half, it all came from a brilliant piece of attacking prowess from Morgan Lyons at out half, he stepped out of a tackle and broke free linking with Greg Carroll before the winger found the supporting Brian Smith who powered over as he was tackled for a 10-6 lead.

This was the point in the game where Clanwilliam stood up to be counted, where the Division 2 underdogs clearly underlined why they belonged on this stage. Their key men looked for the ball and took on responsibility with big carries.

All season, Kieran Merrigan has been a key man and he was very much to the fore during this spell, Richard Childs was lively also while Paul Ryan, Ian O’Rahelly and David McCormack all managed to break tackles during this good spell. It was reflected in the scoring with Kissane continuing his kicking masterclass with a third kick on the half hour mark to make it 10-9.

Five minutes into the second half, Clonmel engineered their third try.

Cooney sparked it with a grubber kick in behind the Clan defence and towards the in goal area, he seemed to have won the race to touch down but somehow Pauric Ryan got back to get a foot to the ball before the touchdown, the kick ricocheted off the face of Cooney and towards the post, Greg Carroll was first to react and he pounced to score.

Cooney converted and added a penalty four minutes later to stretch the lead to 20-9 with 20 minutes to go. Clonmel were now edging the contest in most phases of play. The back row of Quinlan, John Gallagher and Neville Melbourne were just starting to get the breakdown edge they needed, Ronan Crosse and John Long caused disruption at lineout time and Lyons and Alex Sheehan kept Clanwilliam pinned back.

A fourth try didn’t come however and Clanwilliam had a glimmer of home on 70 minutes when Quinlan saw yellow for a breakdown infringement on their 22. That gave Clanwilliam a chance and the manner in which they worked their way up field, first from a lineout and maul and then from some pretty impressive phase building with their supporters hoping for the best.

It all led to a series of penalties on the Clonmel line and a 75th minute sin bin for Melbourne to put Clonmel down to 13, but somehow, after two scrums and penalties, the try didn’t come. Scrum number three saw the Clonmel front row lock down tight.

Loosehead Mike Sheehan marshalled his troops well throughout and here he was at the fore, getting just enough of a hold on it to allow for a slight error at the base. McCormack just couldn’t control the loose ball and as it came out of the scrum, Clonmel pounced, forcing a turnover and kicking down field.

That was pretty much the game but the win was sealed when a loose pass was intercepted by the excellent Luke Hogan near the touchline inside his own half and the centre ran the length of the field to score.

While Clonmel took the spoils and Clanwilliam travelled home disappointed, Tipperary Junior rugby was a real winner on the day.

For Clonmel, it was undoubtedly one of the biggest days in its 122-year history and the Clonmel supporters left Musgrave Park having witnessed a truly memorable occasion.