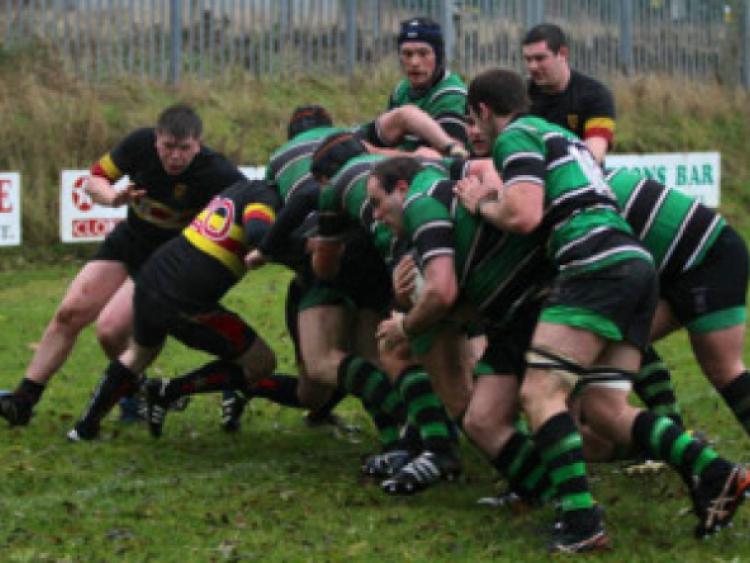 Following a home defeat the previous weekend at the hands of Kanturk, the first defeat of the league season, action continued in the Munster Junior League Division 1 last Sunday with the Clonmel 1st XV playing host to Cork side Old Christians.

Following a home defeat the previous weekend at the hands of Kanturk, the first defeat of the league season, action continued in the Munster Junior League Division 1 last Sunday with the Clonmel 1st XV playing host to Cork side Old Christians.

Clonmel and Christians were going into the game in 6th and 7th place respectively in the league table and both sides were anxious to deliver a good performance.

In very wet and testing conditions, it was the visitors that opened the scoring with a well taken penalty in the fourth minute to take an early 3-0 lead. With territory and possession traded between both sides, it took until the thirty minute mark for the home side’s Conor Cooney and Greg Carroll to combine to engineer a great run down the stand side and Greg went over the line for the opening home score. Fly half Cooney duly converted to swing the lead in Clonmel’s favour. With a further penalty to both sides, the first half ended with Clonmel holding a narrow 10-6 lead.

The second half resumed with an early penalty for Clonmel followed by the Carroll/Cooney combination extending the lead with a well worked try by Carroll duly converted by Cooney.

The Clonmel pack continued to pile on the pressure and began to take control of the set pieces and on three occasions Mark Corby crossed the line, ball in hand, to push the home side into a comfortable lead. The final score of 39-6 represented a solid performance for the home side and a well earned return to winning form. Clonmel now head to Cobh next Sunday with a four from five record and a strong desire to build on this week’s win.

The Clonmel 2nd XV took on Dungarvan at home on Sunday last in the fifth round of the Munster Junior 2 league. Darren Cass opened proceedings with an early try following a great run from inside the Clonmel half. Dylan Cadogan converted. Further tries from Conor Tobin, Darren Cass, Padraig Keating, Cormac Rea and Dylan Cadogan demonstrated a good all round squad performance. Great work in the Clonmel lineout helped secure much of the possession. The final score of 68-3 maintains Clonmel’s top of the league position.

Amee-leigh Murphy Crowe opened the scoring for Clonmel with an early try and within minutes was back in under the posts for her scoend try of the night with Mairead Comerford adding the two points. Lisa Tobin and Amee-leigh added further tries and with the on-form boot of Mairead Comerford they brought the half time score to 22-3 in favour of Clonmel.

Three second half tries from Amee-leigh Murphy Crowe sealed her superb performance on the night with Lisa Tobin and Mairead Comerford both adding the additional points. A try and penalty for the Waterford side saw Clonmel run out 48-8 winners in a solid full squad performance.

Training continues on Friday nights at 7.30pm and new players are still needed!