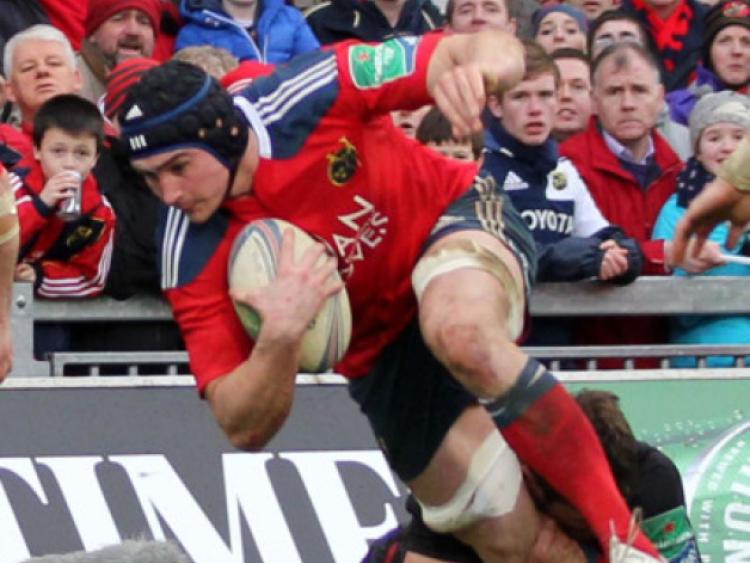 Clanwillliiam under 18’s began their Pan Munster League campaign with a good 14-10 win in a fine match against Young Munster in Clanwilliam Park last Saturday.

Clanwillliiam under 18’s began their Pan Munster League campaign with a good 14-10 win in a fine match against Young Munster in Clanwilliam Park last Saturday.

Clanwilliam started the game strongly and early pressure led to a try from Frank Ryan which Niall Leahy converted.

Clanwilliam continued to dominate and went fourteen points up after twenty minutes when Andy Cummins won a sprint to the line from a Darragh Burke grubber kick.

Young Munster gradually upped their game and ended the half with a penalty. The second half saw Young Munster continue their ascendency as they started to have the majority of possession.

The Clanwilliam defence was exceptionally tight and disciplined giving Munsters no opportunity to exploit their possession.

Any ball Clanwilliam had was well used, particularly by Niall Leahy as his kicking caused problems for the Munster’s back three. With fifteen minutes to go, Munsters eventually broke through to score under the posts and leave a four point gap.

Clanwilliam showed their character as they dug deep and competed for every ball. Munsters kept everything to hand as they looked for the try they needed but the Clanwilliam tackles continued coming from the likes of Jack Comerford, Paul Ryan and Sean Maher. A great rob from a maul by Niall Leahy in the closing stages was typical of the team effort on a day where all players gave everything they had to secure an important victory.

The team travel to Tralee next Saturday for the next round of matches.

On Sunday last our U11s took to the field in Cashel for two matches both against Landsdowne. In the first game Fethard dominated from the start with great running from our backs and support play from our forwards. The scoreboard reflected this. The second match was a great game end to end rugby the final score in this game was one try each which was a fair result for both sides for the effort the two teams put in.

Fethard U7s travelled to Clanwilliam for a morning of Rugby. Even though the rain was falling and our first game for the New Year this did not deter these youngsters from playing fun rugby. Led by Charlie Walsh with team mate Adam Routtle a handful of tries were scored against fine opposition. Shane Ryan worked well with Sean Fitzgerald to record more scores. Darragh Hall and Ned O’Meara’s passing improves with each game and their fine tip offs and tagging added to the performance. Brothers Lee and Troy Delaney both have great speed and quick reaction.