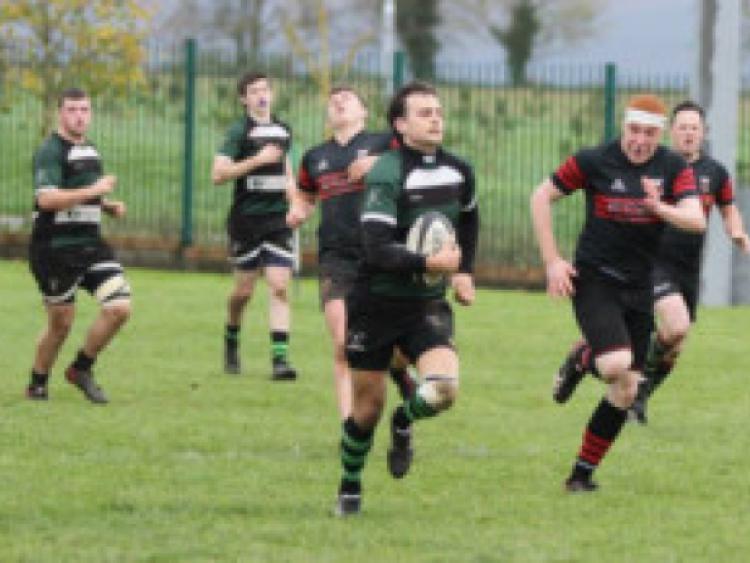 After two league defeats Cashel traveled to Highfield in determined mood on Saturday.

After two league defeats Cashel traveled to Highfield in determined mood on Saturday.

A win in this league can propel a team up the ladder and that was the target.

It was expected that it would be a forward battle and so it turned out to be. Cashel played against the wind and the hill in the first half. Highfield used the elements and kept Cashel pinned back in their own half. They threw everything at the Cashel defence but it held solid. Alan O’Donnell left the field after 17 minutes with a knee injury. Pat O’Connor moved to 12 with Andy Kelleher going in at full back. After 25 minutes of stalemate Silke made a break into Highfield territory. The forwards got a foothold and began to pressurise Highfield, handling was poor due to the conditions, but it eventually resulted in a penalty near the posts for Cashel which Darragh O’Brien kicked. This turned out to be the last score of the first half. Cashel 3 Highfield 0.

Cashel took the initiative from the start of the second half. A penalty chance was missed but to be fair it was not a day for kickers. 15 minutes into the half Ed Leamy got possession thirty meters out, raced for the line and fed Pat O’Connor who took it to the 5 meter line. Darren McGrath was on hand to to take it to the line. He fed Darragh O’Brien who squeezed in at the corner.

Robin Foote, Rory O’Connor and Danny Lambe had to leave the field with injuries and were replaced bu Niall Fitzgerald, Andrew Wallace and Howard Stanley. Brendan Crosse and Kieran Gleeson made appearances later in the game.

Highfield came roaring back and bombarded the Cashel line but could not score. Cashel were awarded a penalty, Jonathan Ruru kicked to the Highfield 10 meter line, the lineout was won and then came the individual score of the day as Darren McGrath got possession, sold a dummy, cut inside and headed for the line to score a wonderful try. This put Cashel in a commanding position but Highfield were not finished and back they came again.

The Cashel defence held solid but on 80 minutes Highfield mauled from a lineout and scored a try in the corner. A minute later Darragh O’Brien made it 16-5 with a penalty and this was the final score.

A feature of the game was the Cashel defence. The tackle count was high and they repelled everything Highfield could throw at them. The pack was hungry with Ed Leamy outstanding once again. Ailbe Devitt made a welcome return. John McSwiney played well and the versatile Niall Fitzgerald was everywhere. In the front row James Maxwell caught the eye. John Ed O’Connor was injured for the game. Darren McGrath had an excellent game at scrum half. Brian Silke, Alan O’Donnell and later Pat O’Connor were very solid in the center. Darragh O’Brien took his scores well. Cashel head coach, Brian Hickey was pleased with the performance, particularly the defence. The scrums and lineouts were also good. They now have a three week break to get the knocks and bruises mended.