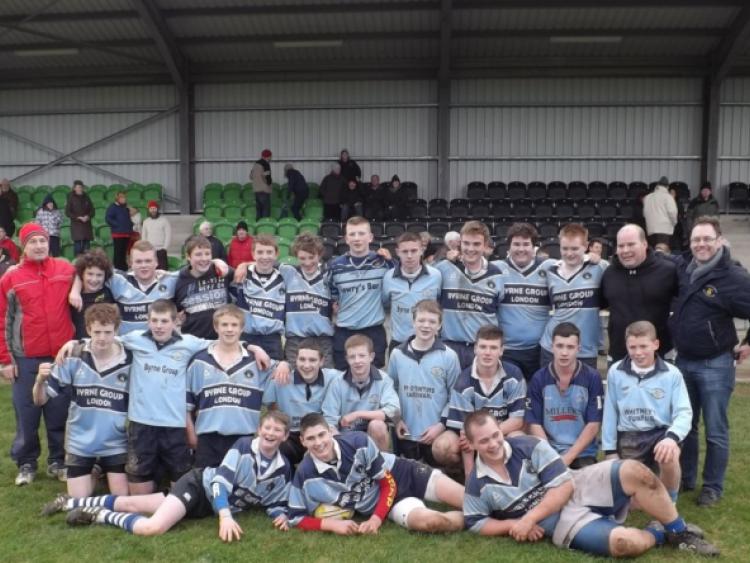 Clonmel was the venue for the U16 2013 East Munster League Final between Kilfeacle and Dungarvan and the conditions were rough enough with a strong gale blowing.

Clonmel was the venue for the U16 2013 East Munster League Final between Kilfeacle and Dungarvan and the conditions were rough enough with a strong gale blowing.

The last time these two sides met was in the League semi final last season. Dungarvan were the victors on that day in Kilfeacle and the lads knew they had a huge task ahead in this one.

Captain Luke Ashmore won the toss and choose to play with the strong wind in the first half. It was a good choice as Kilfeacle lorded the possession in the opening exchanges as they tried to unlock the Dungarvan defence. After 15 mins Kilfeacle were awarded a penalty and Josh Ryan kicked it over from 30m with ease. There were anxious moments then as the Dungarvan centre broke the line but was stopped by Tony Burns, Tomas O Murchu and Shane Farrell. The Kilfeacle pack were well on top in the scrum and in the loose with Gavin McCormack, Brian O’Connor, Sean Savage and Brendan McGrath all making good runs in Dungarvan territory.

Mikie Lonergan, Jack Ryan and Luke Ashmore won the battle up front with ease and worked hard in winning and maintaining possession for the team. A lovely passage of play then ran for 6 phases and ended when Edmond Bourke hit Josh who found Davy Byron who took it 10m before finding Daire Egan who hit an overlapping Shane Farrell for the first try of the game in the corner. The conversion only just went wide and the referee blew his whistle for half time with the score Kilfeacle 8 Dungarvan 0

At half time the big question was if 8pts was enough of a lead against such a strong wind. Dungarvan used the wind as best they could to keep Kilfeacle around their own 22 but strong running and quick thinking by our back line of Edmond Bourke, Josh Ryan, Davy Byron, Daire Egan, Patrick Meehan, Tony Burns and Maurice O’Sullivan took us in their half time and time again. The forwards worked their socks off in defence and support, Lorcan O’Donovan, Conor Leahy and Rian Doody in particular were flying around the pitch. There were 3 goal line stands on the Kilfeacle line in the second half and on the third attempt they got in as their out half took it over from 5m.

Kilfeacle never dropped their heads and Mikie Lonergan and Luke Ashmore laid siege to the Dungarvan line once more with both nearly going over to put the game away. Then with 7 minutes remaining came a moment of true brilliance after a really aggressive carry by Captain Luke Ashmore took us to their 22 where a ruck was formed and then Ed found Davy Byron who led the Dungarvan team on a merry dance as he beat 6 players and side stepped the full back at pace to place the ball between the posts to put us up 13-7 with conversion to follow. Josh kept his cool and nailed the kick from the 22m line to make it 15-7.

The last 5 minutes were all about work and Kilfeacle played on as though they were the ones trailing to see the game out in style and keep Dungarvan at bay. When the Referee blew the full time whistle he sparked amazing scenes of celebration as the players had finally got their just rewards for the serious amount of work and training that was put in to make this victory possible.