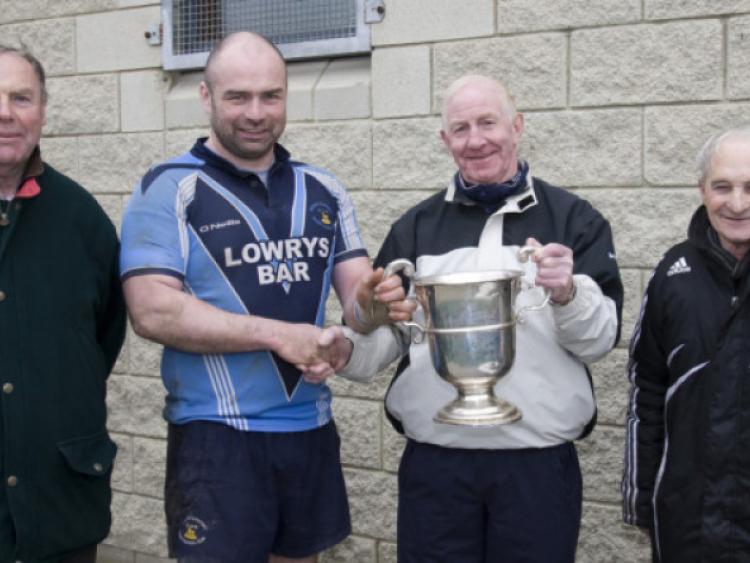 This was Kilfeacle’s last game of the season and last chance of obtaining silverware. Kilfeacle brought hunger and intensity to this final that had been present all through the season and gave a very impressive display.

With a strong wind at their backs and in impressive form they had their opponents pinned back and soon scored another unconverted try to go 10 points ahead. At this stage Nenagh Ormond looked shell shocked and Kilfeacle looked menacing. Wave after wave of attack pummelled the Nenagh Ormond side’s defences and attempted relieving kicks were held up in the stiff breeze.

With just twenty eight minutes gone Nenagh Ormond found themselves struggling against the elements and a very committed opposition. Nenagh Ormond were lucky not to be a further 7 points behind after some more good work by the Kilfeacle created the platform for another line break by. However the wind this time worked against the attacking side as a kick through just bounced a metre too far denying another scoring opportunity.

The realisation that unless they raised their game that they could be on the wrong side of a bad, bad result finally sunk in and Nenagh Ormond began to perform better. In the last 15 minutes of the first half Nenagh were very unlucky not to score a try and restricted Kilfeacle and District to continuously kicking away possession to relieve the pressure.

However with the half drawing to a close a fine break by Diarmuid Carr set up the on rushing Ger Luby, who gained great ground before unleashing Charles Walsh, who burst over the line. Shane Morrissey made up for his earlier misses when he scored the conversion. When the whistle went the halftime score read 17 points to 0 for Kilfeacle.

Kilfeacle started the second half with the wind in their faces and within 15 minutes had scored 14 points from two well worked trys scored by Charles Walsh and Diarmuid Carr which were converted by Shane Morrissey. Nenagh Ormond were under severe pressure however this is where Nenagh Ormond showed their true character and determination. When lesser teams would have buckled under the pressure, Nenagh Ormond rose to the challenge.

The next twenty minutes saw both make forays into the opposition 22 but both failed to convert them into scores. The score was now 31 points to 0 in favour of Kilfeacle and there was one more score left. The final score came in the 80th minute and it came in the form of a converted try and it was scored by Diarmuid Carr for Kilfeacle. In the weather conditions the conversion kick, which was the last kick of the game was difficult however not surprisingly was scored by Shane Morrissey and Kilfeacle had deservedly won.

Kilfeacle would like to thank everyone from Nenagh Ormond RFC who travelled on the day and wish the club the best, we know exactly how they feel at losing this final as we were in a similar position in previous years. However they should take heart in the form they have produced in the latter stage of the season as it augers well for the future.

Kilfeacle and District RFC’s First team’s season has ended and what a season it has been. Although it has not been our most successful year, there are definite indicators that the club is moving in the correct direction. Clubs like Kilfeacle will always be measured by the performance and success of their First team. Third in the league, beaten quarter-finalists in the Munster Junior Cup and Garryowen Cup winners is respectable but doesn’t tell the true story of an improving team’s efforts for the year. The Garryowen Cup Final victory was not alone wanted but needed as this squad of players deserved a tangible reward for their efforts and commitment over the whole of the season and anyone who was there will agree that the team did the club proud on the day as they have done so on so many occasions without reward. By lifting they have also lifted the expectations of the club by a performance that injected a new sense of belief in the possibilities for the upcoming season.