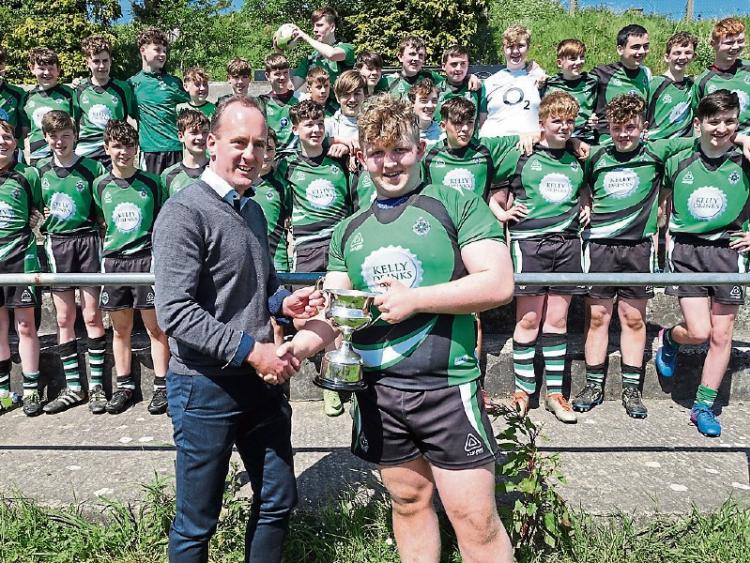 The first half was dominated by The Abbey with Jack Heffernan scoring a spectacular try seven minutes into the game and a successful conversion by Darren Heuston gave the Abbey a good head start in the game. Villiers fought hard against the Abbey boys who managed to keep them back in their own half for the first half. Shortly after, Donagh Hickey took control of the ball and ran from the outside the ten metre line through Villiers’ defence to score a try for The Abbey which was then successfully converted again by the brilliant Darren Heuston. The Abbey boys fought an amazing first half, securing a lead and were in flying form once the half time whistle was blown. Throughout the first half strong tackles were made by Paraic Russell, Ben Hickey, James McCormack and Darragh Kennedy who played consistently well taking down the Villiers boys. Villiers were strong winning the line outs but the Abbey was able to turn over the ball quicker and win the scrums easier.

Playing in Clanwilliam as well as the massive support from the community, the staff and students of the Abbey played a huge role in the success of the school in the second half. Villiers started the second half strong with their first centre scoring a fantastic try pushing straight through the Abbey boys and over the line for a try in the tenth minute. This was converted perfectly by the Villiers winger. Fifteen minutes into the second half the replacement hooker from Villiers was sin binned for a foul which resulted in a penalty for the Abbey taken by Darren Heuston who stayed true to his reputation and put the Abbey further in the lead. The opposition came back strong but were unable to keep the Abbey boys from the try line as Evan Ryan soared across it to secure another try for The Abbey. With the wind blowing against him, Darren missed converting this try but it didn’t matter, the Abbey had secured the score and victory was in sight.

The group of boys involved worked incredibly hard in training for the last few months and everybody in the school is very proud of their dedication to the sport and their school.

The Cleary Cup is back home in the Abbey and will sit proudly beside the O Brien Cup which was won by the senior rugby team earlier this year proving that rugby is still at the heart of the Abbey and can only get better from here on out.