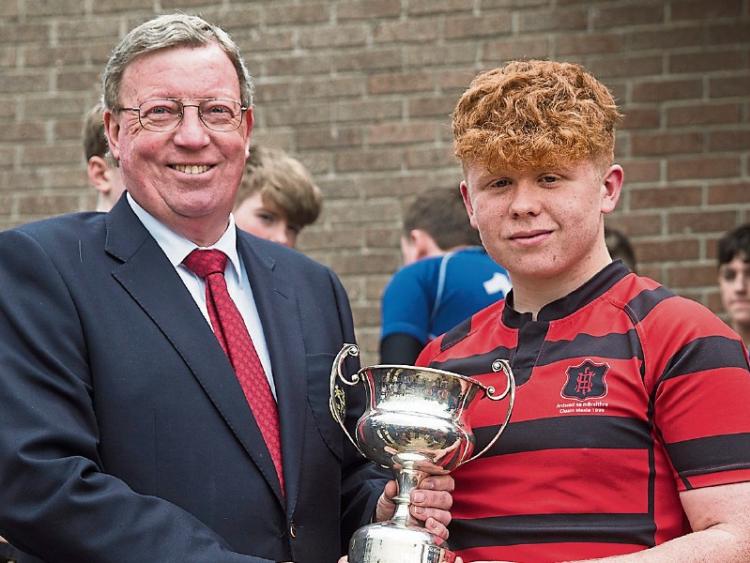 While many may be superstitious about Friday 13th, it proved to be a most fortunate day for Clonmel High School U15 rugby team as they won the Munster Schools Cleary Cup in a narrow, hard fought victory against Villiers School from Limerick in Clanwilliam Park.

High School saw off the Abbey CBS in the semi final while Villiers overcame Nenagh CBS to secure their final spot.

High School had the best of the opening exchanges. They pinned Villiers in their half for the first 15 minutes. Strong running by forwards Brandon Delicato and Killian O'Keeffe kept the Limerick team busy while in the backs Rowan McDonald and Fionn Hallinan were threatening. Villiers were very effective at the break down especially centres Thomas Lillis and Glen Nelson.

Midway through the first half, the High School finally put a few phases together attacking down the right wing. Good rucking from Taine Walters and Ryan O'Neill gave scrum half Chris Ryan fast ball to release winger Lekan Oki to crash over for the opening try. The angle proved too difficult for the conversion.

Instead of the High School consolidating their lead, Villiers' reply was instant. From the restart, winger Syed Fahad Rahman out jumped his opponent to pluck the ball from the air in spectacular fashion, to the delight of the raucous support of the Villiers' fans. Showing great composure, Villiers recycled the ball through multiple phases until impressive wing forward Eoin McCormack touched down to level the score despite the best efforts of the High School defence. The conversion was missed to keep the score five points apiece.

With three minutes to half time, the High School rallied to produce what would be the match winning score. A swift passing move begun by out half James Morris found centre Emre Yasar who cut through the Villiers defence before full back Vincent Uzmoefena scrambled to make a try saving tackle.

Yet fast hands from Chris Ryan and James Morris found High School captain Adam Cunningham in space and he deftly evaded the desperate attempts of the Villiers defence to score to the delight of his team and supporters. The conversion again proved elusive to leave the half time score 10-5.

Most of the second half was played between the 22s as both teams were evenly matched.  Villiers' half backs Noah Patterson and Douglas Howell were a constant threat. High School's Rian McCormack and Oran Ryan were called on to make several important tackles.

As the half wore on, Villiers' patience began to pay off as the High School found themselves defending on their five metre line following successive penalties to Villiers.

The Limerick team edged closer to the High School line with big carries from Leon Mullally and Victor Jumbo. A try seemed inevitable.

The siege was finally lifted when Brandon Delicato pounced to win a penalty for his team on his try line. The gasp of relief around Clanwilliam Park was audible.

The final minutes were played out on the half way line. Tim Nugent made a bursting run up the middle of the park for the High School which typified his work rate all afternoon.

Try as they may, Villiers could not breech the High School defence and the Clonmel team hung on for a famous victory.

Peter Silke, Chairman of the Munster Youths Committee, paid tribute to both teams for an excellent game of rugby. He presented the Cleary Cup to High School captain Adam Cunningham to the jubilation of his team mates and supporters.

This was a fitting end to a memorable season for the High School team. Hard work from September on the training pitch, coupled with  impressive performances in the McCarthy Cup and post Christmas league, prepared them for their Cleary Cup run. Well done to the  whole panel and coaching staff for this fantastic victory which was played in great spirit. The whole school is proud of your achievement.