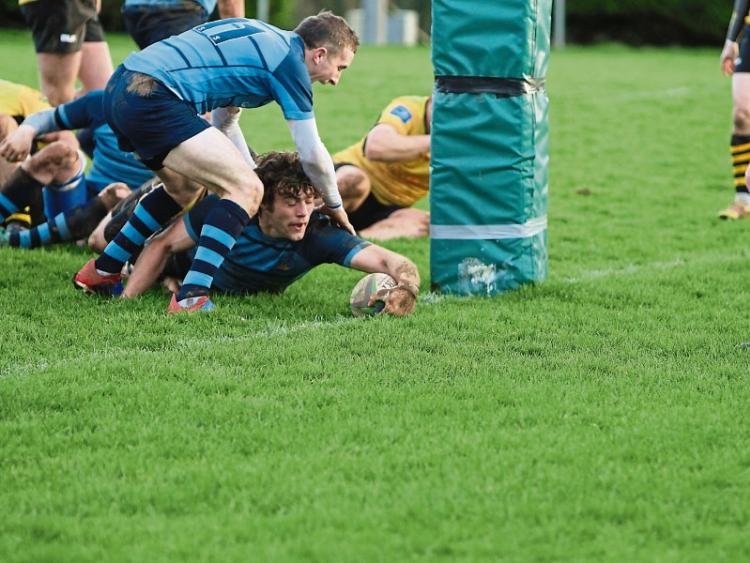 Kilfeacle’s Kevin Kinnane stretches for the line to score a try against Ashbourne in the All-Ireland semi-final at Morrissey Park on Saturday. Kilfeacle will play Dromore in the final on January 25

On Saturday last Kilfeacle and District RFC welcomed Ashbourne  to  Morrissey Park for the semi-final of the Energia All-Ireland Junior Cup.

Ashbourne were three-in-a-row champions and their sophomore win came at the cost of Kilfeacle in 2018. Kilfeacle knew they’d have to be at their best to earn a final berth against Dromore on January 25. On the day the ‘boys in blue’, along with over 1,000 supporters, all played  their part to record an historic victory.

The opening 10 minutes were a cagey affair, Kilfeacle were having the better of the early exchanges but uncharacteristically the lineout was misfiring and relinquishing scoring opportunities.

In the 12th minute Kilfeacle opened the scoring with a well-taken penalty from the boot of William Staunton.

From the restart the game fell back into the previous pattern, with Kilfeacle having the better possession but errors, both forced and unforced, meant that the scoreboard remained at 3-0 to Kilfeacle.

In the 24th minute,  after repeated infringement, Ashbourne were reduced to 14 men and William Staunton doubled Kilfeacle’s lead with a penalty from just outside Ashbourne’s 22.

Kilfeacle went on to make the numerical advantage count when, after a huge team effort and 16 phases of play, Kevin Kinnane scored under the posts. William Staunton  tapped over the conversion to stretch his team’s lead to 13-0.

Within two minutes William Staunton found himself in the right place at the right time. Brian McLoughlin, Diarmuid O’Donnell, Brian Barlow and Simon Barry all drove a rolling maul deep into Ashbourne’s 22. When the maul collapsed Jack McLoughlin, James Ryan and Philip O’Connor gained another five yards. Kevin Kinnane off-loaded to the waiting Gavin Heuston who provided the perfect pass to Darren Lowry. Kevin Doyle, Keith Burke and John Bourke all made dummy runs down the blind side, which gave Darren time to look up to see William Staunton and James Hogan with a two-on-one on the far side of the field. Darren’s crossfield kick was so precise that William Staunton didn’t need to break stride as he scored in the corner for an 18-0 lead.

Things got even better when, in the 38th minute, William Staunton scored a drop goal.

Clanwilliam win Garryowen Cup with victory over Waterpark in final

Many teams, when losing by 21 points away from home, would crumble but Ashbourne are not one of these sides. They came roaring back into the game. With an immense team effort they came looking for a score. For the first time they had a number of phases in the Kilfeacle 22. Kilfeacle were defending manfully but just after the referee had announced that it was the last play of the half Kilfeacle were reduced to 14 men for a professional foul by playing the ball on the ground.

Ashbourne were awarded a penalty right in front of the posts. They opted to kick the penalty and open their scoring. This gave them the half time interval to plan their 10 minutes with an extra man. The penalty was kicked. The whistle was blown. The score was 21 points to 3.

At the start of the second half, with only two minutes gone, Ashbourne scored a very well-worked move and touched down in the corner. The conversion attempt fell short of its mark. At last the travelling supporters had something to shout about.

Within five minutes, of total dominance, Ashbourne had scored a second try under the posts which was converted. The score line now read 21 points to 16.

Kilfeacle were returned to full strength and the home supporters were back in full voice.

In the 17th minute of the second half, after another unbelievable team effort, Kilfeacle were awarded a penalty, which William Staunton slotted with aplomb. The score was now 24-15.

Neither side was giving or taking an inch during the next 12 minutes, so when another kickable penalty was awarded in the 29th minute William Staunton gleefully accepted and stretched his team’s lead to 27-15.

Ashbourne were not finished just yet and there was another twist in the tale when in the 37th minute they scored their third try under the posts. This was converted in haste.

The score was now 27-22 but the clock was against Ashbourne.

Ashbourne asserted some pressure during the last few minutes but Kilfeacle were able to take control of the ball, retain possession and run down the clock. Eventually the referee signalled that the time had elapsed and the ball was despatched to touch, which signalled the end of a titanic tussle and the beginning of an amazing celebration for Kilfeacle.

“Junior Rugby is alive and well,” said Willie Staunton, player coach of the victorious team. “That was one of the tougher games I’ve played in,” he continued. “We got stuck into them and built a 21-3 lead at half time. They’re not champions for nothing and put two converted tries on us when we had a man in the bin in the first 10 minutes of the second half. It was a real dog fight but our forwards stepped up to the plate and we earned some penalties to keep the score board ticking over.

“Speaking for myself and the team I have to recognise the phenomenal support we have. It really did make all the difference! This was an historic victory for ‘the little club on the Hill’ and it was so emotional to be able to do this here in front of family members and friends. We’re delighted, but we’ll park it now and get back into league mode for the next few weeks.”

Kilfeacle chairman Pat Heuston said “This has been a long time coming, which makes it all the sweeter.

“The club as a whole have put in so much work and the fruits of this work can be seen in the performances of the team. Ashbourne were formidable opponents on the pitch and unbelievable ambassadors off the pitch in the manner in which they graciously accepted defeat and stayed to celebrate the occasion. We wish them the very best for the rest of the season”.