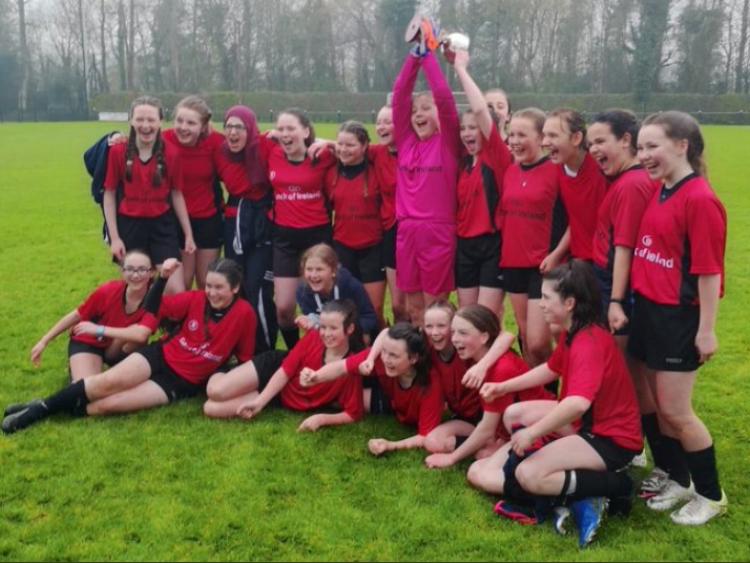 Pres Thurles scooped yet another Munster A title on Tuesday last at a wet and windswept Cahir Park. This time it was the turn of the first year girls to secure glory for their school as they beat a much fancied St Mary's Newport in a tight and tense Munster final.

There was a carnival atmosphere in Cahir as both schools brought huge support on the day. The Newport girls made all the running in the opening exchanges and were denied the opening goal thanks to the timely interventions of Ellen Maher, Holly Maher, Aoife O'Reilly and Kate O'Keeffe.

Having weathered the initial storm the Pres girls settled into the contest and the excellent Ava Ryan and Molly O'Dwyer started to dominate the middle of the field allowing the Pres girls to gain a foothold in the game.

Chloe Shorley, Kate Ralph and Kate O'Hora worked tirelessly throughout and it was this work ethic that paved the way for this victory.

Henrietta Kiernan was a constant thorn in the Newport side and it was her probing runs that ultimately led to the pivotal moment in the contest.

Having reached the interval with both sides deadlocked at nil nil, the Pres girls came out firing in the second half and a typical Henrietta Kiernan run ended with her being unceremoniously dumped onto the floor by a late challenge from a Newport defender resulting in a penalty kick to the Pres.

The large crowd paused to collect their breath as all eyes were fixated on Molly O'Dwyer who would assume the responsibility to give her side the lead.

Molly showed all of her qualities as she expertly stroked the ball to the Newport net to give her side the precious lead.

St Mary's laid siege to the Pres goal for the remaining minutes but Roisin Dwan who had been a fantastic presence in the Pres goal was not for passing.

Rachel Ralph's introduction in the second half was a big factor in the victory as she made several clearances in the closing stages.

The referee's final whistle was met by rapturous applause as once again Pres Thurles had scaled the dizzy heights of Munster success.