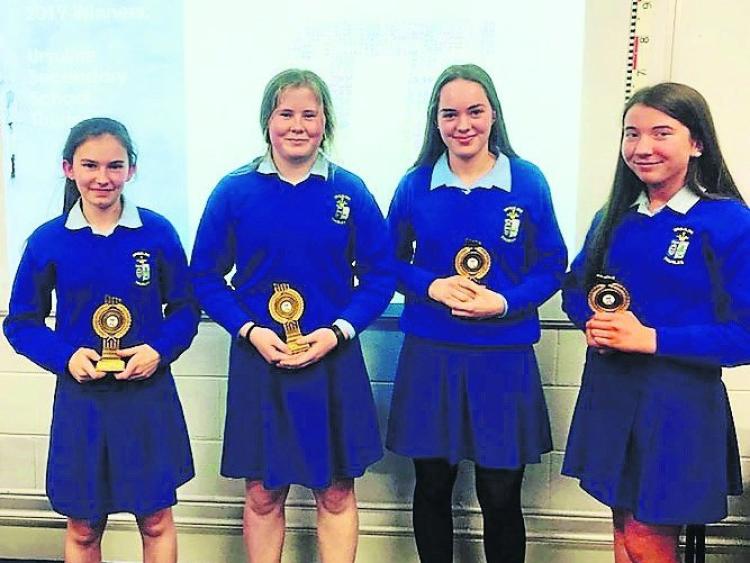 It was a closely fought contest between Ursuline Thurles, Kilkenny College and CBS Kilkenny with Ursuline snatching victory by a single point in the end.

There were competing teams from around the region including Tipperary, Kilkenny, Carlow, and Wicklow.

The UCT winners were Caoimhe Dooley, Katie Gleeson, Emma Synnott and Gráinne Gleeson and it was a great opportunity for the students to flex their mathematical muscles.

The Ursuline was well represented at the County Schools Track and Field in Templemore on Wednesday, April 10. The students from first year to fifth year competed across a range of events including long jump, shot putt, 100 metre sprints, 800 metres, hurdles and relays.

Congratulations to Louise Hickey, Lorna Ryan and Leona Maher who qualified for the final of the Junior 100 metres. Leona finished in the gold medal spot and Lorna came in fourth.

Sophie Walsh and Marion Gillman both made the final of their 100 metre sprint in the Intermediate Girls and Marion finished second.

In the Junior hurdles two Ursulines got on the podium, Chloé Byrne in second and Louise Hickey in third. There were four competitors in the 800 metre final of Minor Girls, Rebecca Danagher, Alysha Kearney, Paula Quirke, and Kate Ferncombe.

Congratulations to Kate who came first. She’s had a great year competing in the school singlet both at Cross Country and Track and Field.

Chloé Byrne’s second medal of the day was a bronze in the Junior Girls 800 metre final.

Kaja Gorwa came fourth in the All-Ireland Final of the ARTiculation Public Speaking which was held in Kilkenny Castle recently.

She had compiled a very interesting presentation on ‘The Great Wave of Kanagawa’ a woodblock print by renowned Japanese artist Hokusai who made his best, most famous work when he was in his 70’s including the iconic Great Wave.

Kaja was proud to represent her school having qualified from the Regional Final in Clonmel where she beat off some excellent speakers.

She did very well in Kilkenny speaking to the audience with confidence about the techniques used by Hokusai as well as giving a fascinating insight into this artist and his work.