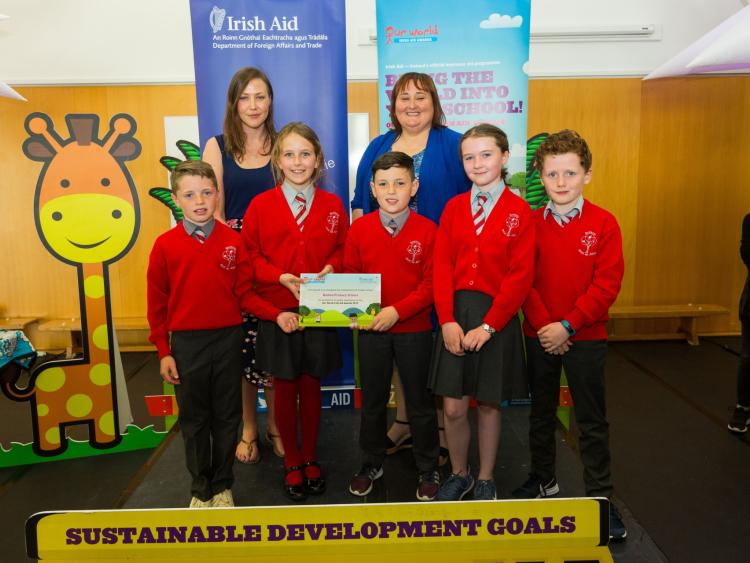 A Tipperary primary school shortlisted for a regional award as part of a global citizenship programme has been praised by Minister of State for the Diaspora and International Development, Ciarán Cannon T.D.

Pupils from Ballina Primary School earned a place at the regional final of Our World Irish Aid Awards held in Limerick this week with their project 'If You Lend a Helping Hand the Help will Expand'.

As part of their entry, the students hosted a Hungry Heroes Day, focusing on the global goal of zero hunger. They also created a global goals poster and displayed it in their school to raise awareness.

Pupils and teachers from the school showcased their project alongside those from 14 other schools at an event in Mary Immaculate College on Wednesday, May 15.

Congratulating the teachers and pupils at Ballina National School on making it to the Limerick regional final, Minister Ciarán Cannon T.D., said that the standard of project entries this year had been exceptionally high.

“My warmest congratulations go to the teachers and pupils at Ballina National School on being named regional finalists,” he said.

“Hundreds of primary school pupils across Ireland took part in the awards, learning that each and every one of the world’s 7.6 billion people counts equally and how they, as global citizens, can make a tangible difference to the lives of others in developing countries.  In particular, they have been learning about an Irish Aid supported project in the northern highlands of Tanzania, Dunia Designs, which is run by Irish expats Evanna Lyons and Alexis Cronin as an example of an eco-friendly enterprise that diverts and reuses waste to create furniture and provide an opportunity for local families to earn an income. This project was chosen specifically to highlight the global crisis that is the 13 million tonnes of plastic that ends up in our oceans every year, harming local and global marine life and eco-systems.

Now in their 14th year, the awards invited children across Ireland to create projects about the challenges facing children in developing countries and the role played by Ireland, through Irish Aid, the Government’s programme for international development.

This year primary schools across the country have been exploring the theme of ‘Leave No One Behind’ which recognises that each and every person counts and deserves a fair opportunity, regardless of who they are and where they live, giving pupils from across the island of Ireland a unique opportunity to gain an insight into the lives of children in developing countries and to understand that, while we may live thousands of miles away from our Irish Aid partner countries, the way we live our lives makes a difference to theirs.