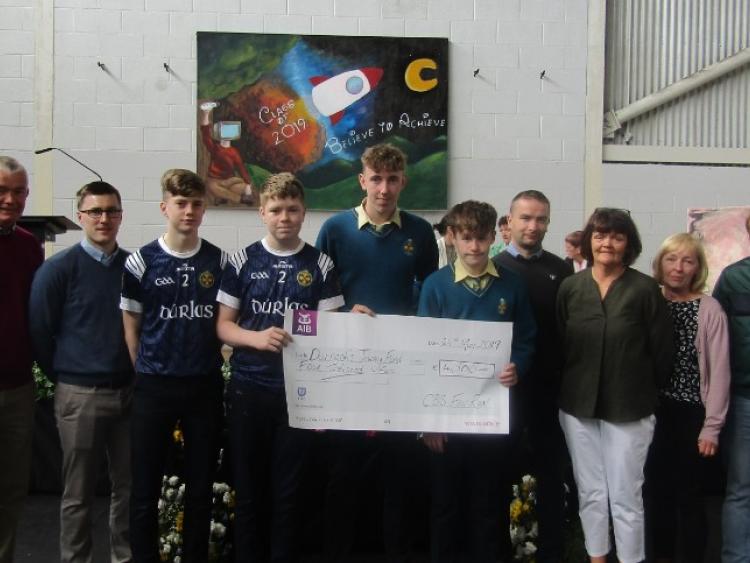 Students and staff from Thurles CBS have banded together to raise an incredible €4,500 in aid of past pupil Darragh Stakelum who was diagnosed with cancer last August.

Students from first to sixth year stood proudly in the James O’Donoghue Sports Hall at the school last week to present a cheque to the Stakelum family for Darragh's ongoing rehab following his surgery for a brain tumour in University Hospital Cork last year.

In 2015 Darragh's life was turned upside down after he was diagnosed with optic nerve atrophy - a degradation of optic muscles in the eye. Shortly after reaching his 26th birthday, Darragh had lost all vision in both eyes.

However the inspirational young man continued to take everything in his stride and the following year he became the first ever Tipperary person to win the Irish Open Blind Golf tournament, later going on to represent his country at the world blind golf championship in Rome.

But last August Darragh was dealt yet another crushing blow when doctors confirmed he had a malignant brain tumour. He underwent surgery followed by radium treatment, continuing hard to overcome each obstacle put in his path.

A massive fundraising campaign was subsequently launched by the Stakelum family to help provide the best care and rehab for Darragh as he makes his recovery. To date over €37,500 has been raised in just over two months by friends and family.

Now, in a show of solidarity with a courageous past pupil, his former school community have decided to raise vital funds for his campaign, collecting €4,500 through a sponsored walk and fundraising efforts.

In keeping with the theme of ‘2gether With Darragh’ any student who went above and beyond with fundraising was presented with a school jersey which had the number two emblazoned on it.

As the students proudly wear their jerseys, they will continue to show solidarity with Darragh and keep his courageous struggle in their minds and in the minds of the public at large.

Details on how to donate to Darragh's journey outside of the gofundme campaign are included below. All these funds are been used to provide the best care for Darragh to ensure he recovers from his recent treatment.