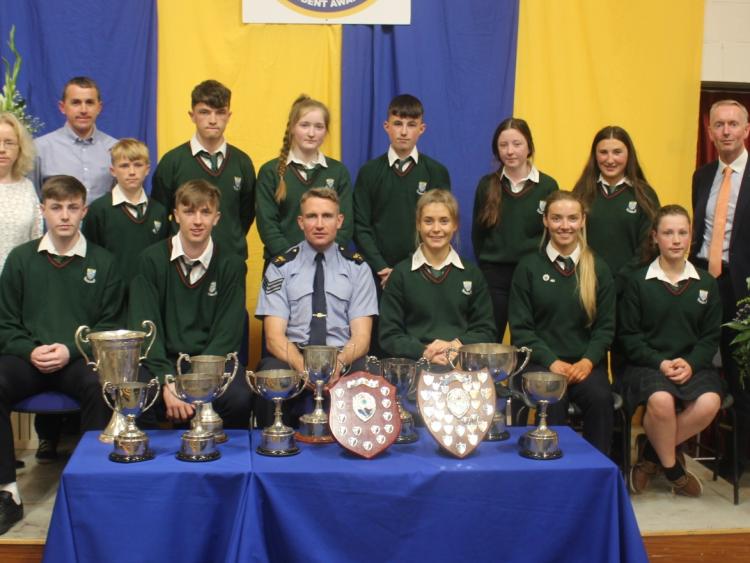 On May 25, the school community in Cashel Community School gathered for a sports awards ceremony, to recognise and celebrate the fantastic sporting achievements of so many students, across many different sports during the school year, while representing CCS.

He spoke with great humility about his achievements and his career. Being a team player, working hard to fulfil ones potential and being honest in terms of preparation, were some of Eddie’s main points when addressing the crowd. The current Laois senior hurling manager explained that he applied this approach to his hurling, to his chosen career and to management.

The many teams and individuals who won County, Munster or All Ireland titles for CCS this year were then brought to the stage to be presented with their medals by Eddie.

In camogie the All Ireland winning senior and junior teams were first up, followed by the first year camogie team who won the Munster A Blitz.

The tennis team of Sophie O'Meara, Eleanor Tobin, Siobhan O'Connor and Kate Maher who won the Munster u19 shield were next to receive their medals.

They were followed by both U14 CCS boys football teams who won the A and C Tipperary competitions, and the Senior football team who bridged a 15 year gap when winning the Tipperary A football championship (McGabhann Cup).

Next were the athletics trio of Shane Buckley, Brian Byrne and Grainne O'Connor, who between them won three county titles, three East Munster titles, and one All Ireland title (Shane at 2.5k Cross county).

The Ladies footballers were next to be recognised, with the senior team who won the Munster B title first up, followed by the junior team who beat the Ursuline Thurles in the Junior C Munster final before coming from behind to win the All Ireland final.

Also recognised were the students heavily involved in both the Cycle Against Suicide and the Cashel Darkness Into Light events, along with the sixth year students who received silver Gaisce awards in October.

MC for the occasion Brendan Ryan congratulated all students who were involved in representing CCS in 2018/19, and especially thanked the many sixth years who had played such huge roles on various teams throughout their time in the school.

He encouraged fifth year students to step up and fill the leadership roles vacated by the current sixth years.

He finished by saying a huge thanks on behalf of the students to the teachers who give so much of their free time to preparing for and competing in the different sports.