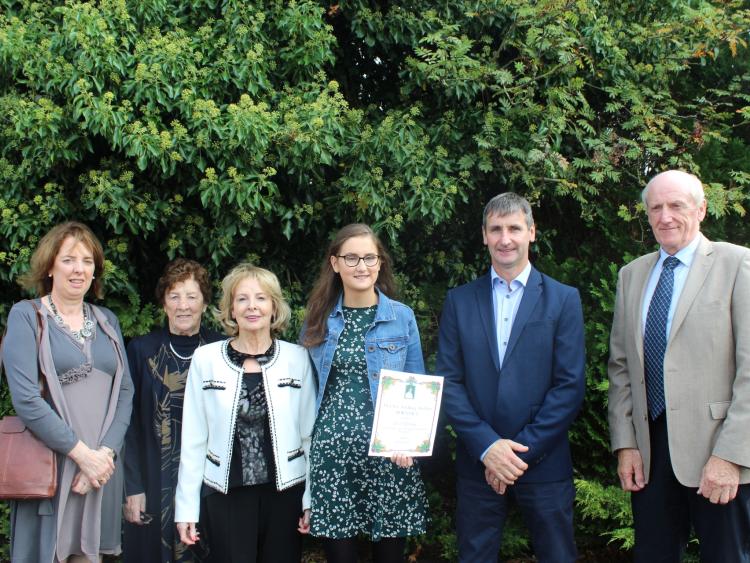 Aisling’s parents John and Evelyn presented Niamh with this very generous contribution towards her university education made in memory of their daughter who died tragically in the Air France accident ten years ago.

Niamh is studying Pharmacy in UCC and thanked the Butlers for their assistance.

She said she was honoured to accept the Bursary and thanked all her teachers. She offered her condolences to John and Evelyn on this the tenth anniversary of Aisling’s death. Niamh was accompanied by her proud parents Tom and Mary and her granny.

Well done to Ruth Schofield, first year who represented Ireland recently at the World Pony Games. Ruth competed with her older brother Caleb. The duo qualified for the A final and were placed in seventh position overall. Ruth and her pony Flash competed over three days in a variety of games in the U14 category.

The Ursuline were well represented at the Inter-Provincial Hockey tournament held on the weekend of September 21 and 22 in Cork. Kate Ryan and Alex Hally played on the Munster U16 squad while Emily Kavanagh and Andrea Hally togged out for the Munster U18s. Emma Osborne was selected for the South East U18 team. Well done to all girls who did their school and provinces proud.

The Senior Camogie team were out on Monday, September 23 against St Flannan’s in the first round of the championship. They led the Clare side by six ponits at half time UCT 0-10 0-4 Flannan’s. The girls had widened that gap considerably by the full time whistle winning out 4-18 to Flannan’s 2-6.

The Ursuline was thrilled to hear the news that two past pupils and Camogie stalwarts have been nominated for Senior All Stars. Well done to Eimear Loughman and Caoimhe Bourke on a great season and the well deserved recognition.

Junior footballers defeated Doon in the opening round of the Munster Championship.

It was a comprehensive win, getting the year off to a dream start. The entire team, including a strong bench had a great day out with Grainne O'Donnell, Cathy Hogan, Grace Murtagh and Kate Burke, in particular, being on top of their game.