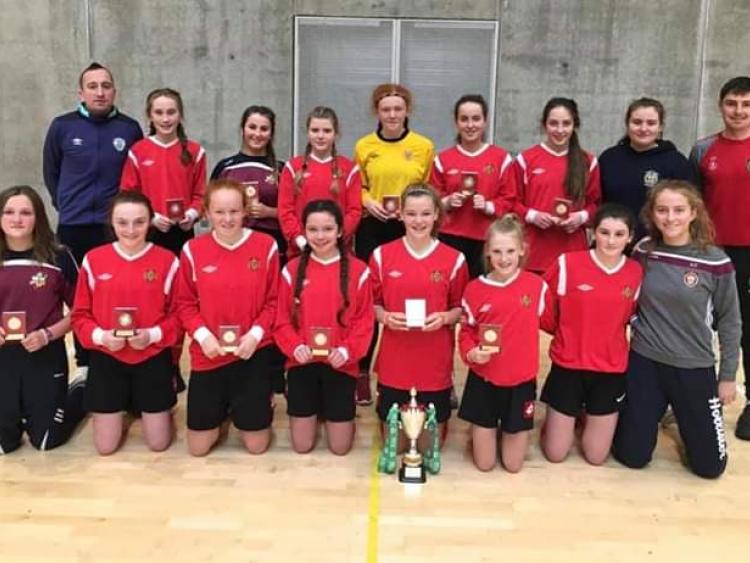 The Presentation Thurles first year girls were crowned Munster champions in thrilling fashion on Tuesday last in the Futsal soccer competition in Waterford.

Having captured the county title in October, the Presentation girls were representing Tipperary in the Munster division of the competition.

First up for the Pres girls were Limerick champions, Moyross CS. The Thurles girls raced out of the traps and opened an unassailable four goal lead thanks to Grace Flanagan (2), Ella Coppinger and Ciara Shelly.

Kerry champions Mounthawk, Killarney provided the next test for the Thurles girls.

Once again it was a test the Pres team was equal to, thanks to the combination of a solitary Grace Flanagan goal and heroic defending by Emer Dwan and Caitlin Shelly.

Spanish Point, winners of the Clare region, provided the next challenge and once more Pres Thurles maintained their winning run with Amy Reddan, Lucy Callanan and Victoria Cantwell adding fresh legs to drive the Thurles girls to victory.

With two games remaining and one victory needed to secure a famous win, the Pres girls were rocked back on their heels when Cork champions Pres Midleton inflicted a first defeat on the Thurles crew, despite good performances from Bláthnaid Lloyd, Ciara Shelly and Grace Flanagan.

With just one game remaining against Waterford champions Ursuline Waterford, the task was very simple: anything other than victory and the Kerry champions would  be crowned champions of Munster. With three minutes remaining, and the game deadlocked, the Thurles girls needed a magical moment and Ciara Shelly was on hand to provide exactly that as she fired home the all important goal.

Reah Sweeney and the ever reliable Caitlin Shelly and Emer Dwan repelled all Waterford attacks and Pres Thurles were crowned Munster champions to scenes of jubilation at the final whistle.

The Pres girls go forward to represent Munster in the All Ireland finals on December 5.