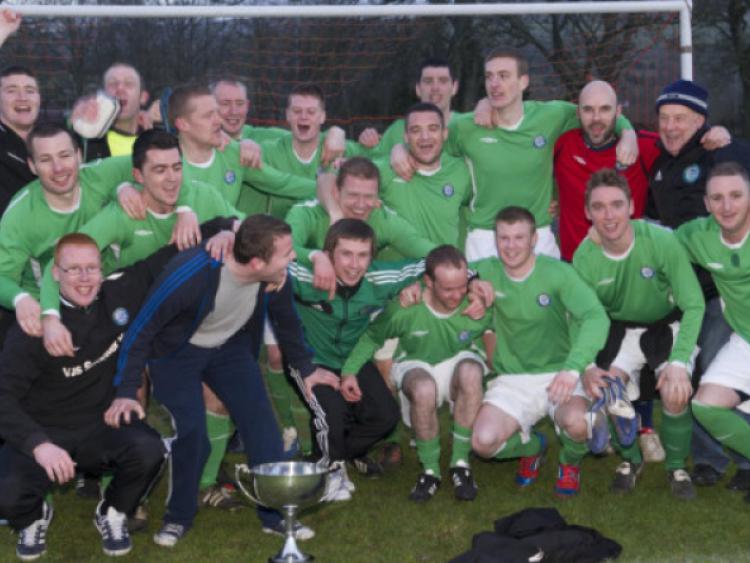 Needing the three points to clinch their first Premier League title Clonmel Celtic had to battle all the way against a game Old Bridge before eventually getting their reward, a goal six minutes from the end ensuring the title was theirs for the first time with a 2-1 win.

Needing the three points to clinch their first Premier League title Clonmel Celtic had to battle all the way against a game Old Bridge before eventually getting their reward, a goal six minutes from the end ensuring the title was theirs for the first time with a 2-1 win.

This was a tough uncompromising game played in fine but windy conditions. Early exchanges saw both sides create half chances with Kevin Waters firing a close in free wide. The Celtic defence were having difficulty coping with Noel O’Brien’s the long throws and from one of these Old Bridge opened the scoring on the quarter hour mark. The long ball into the box caused havoc in the Celtic box and Eoin Leahy forced the loose ball home. It was a wake up call for Celtic and they realised they would have to dig deep to win here. Midway through the half a perfect cross from Kevin Waters was headed powerfully home by Seanie O’Hara but he was adjudged offside.

Celtic equalised on the half-hour mark, a Brian Waters corner wasn’t cleared and Paul Kennedy hit home from close range much to the relief of the Celtic fans.

The second-half began with Celtic upping the tempo and creating chances. Several corners went abegging across goal but nobody could make that vital tap in. Old Bridge were fighting a rearguard battle and to their credit did so gallantly relying on the break to catch Celtic off guard. A few long kicks from goalkeeper Brian Sweeney saw Aaron Moroney and Ritchie Crowe cause several anxious moments.

The introduction of Graham Doyle and Darren Joyce increased the momentum and a winning goal looked inevitable. Six minutes from the end it finally came. A hopeful ball into the box fell kindly to Paul Kennedy and he tapped home. It was the goal which saw Celtic on their way to their first title and when the final whistle went there were wild scenes of delight.

Thus effectively ends a marvellous league campaign for Celtic, achieving their goal from the start of the season of capturing the Premier League title. The Liam Delahunty Perpetual trophy was presented to the winners after the game by Brian Delahunty, son of the late Liam Delahunty and Tony Brosnan representing the league sponsors Clonmel Credit Union.