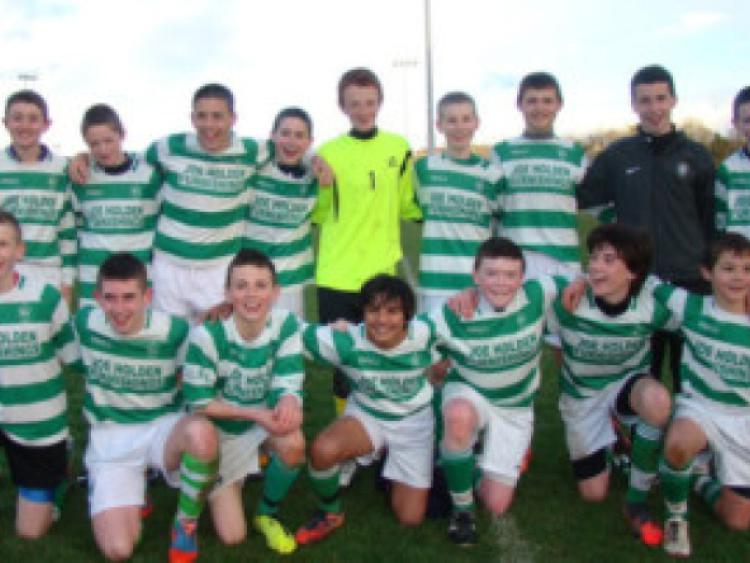 On Thursday evening last, Carrick United travelled to Ferrybank in the knowledge victory would give a fifth league title for this group of boys. We started well getting the ball on the floor with some good passing. Chances came early and when we didn’t take them supporters thought this was not going to be our night. But these boys don’t know the meaning of losing.

Luke Kiely got the first after some great play by him on the wing; he came in side and drove a shot into the corner. Dean Kiely got a good second with a great ball from the brilliant Sean Martin. If there’s a smaller guy with a bigger heart in the League we have not seen him, he was everywhere. The third goal came from some lovely play from back to front with Billy Power putting a slide rule pass in for Luke Kiely to round the keeper and slot home just before half time. To their credit Ferrybank came at us and got a goal back from a penalty following a hand ball on the line as a result Joe was sent off. We were under serious pressure from then on but these boys have great heart and defended brilliantly to the end. The league table shows played 11 won 11, the only team in schoolboy and junior leagues with 100% record with 3 games to play. Here’s hoping the boys play their last 3 games and go through the league season unbeaten. Congratulations to all the boys, the management team and the parents who travelled all season.

Under 11 B League Tramore B 3 Carrick United B 2

Both these teams just lost out on league honours last week. The 16 A squad were piped at the post by Villa following a big win over Tramore. The boys dropped just five points all season losing at Villa and drawing at Tramore. It was that result at the seaside that cost them dearly in the end. Still it’s been a good season for these boys who were just four minutes away from a national semi final appearance.

The 12 A squad travelled to Ferrybank last mid week knowing victory would put them in pole position in the league. However a very good first half for the home team saw them score three times to lift the title. Again it was a good season for our young boys, defeat is a big learning curve in sport and this side has the ability to challenge again in the cup and next season. Congrats to Villa and Ferrybank

Our second division squad were presented the league trophy at Tom Drohan Park last Saturday. The boys were run away winners of this league winning 15 and drawing one of 16 games played, scoring 46 and conceding just 10 goals. This group of players has shown wonderful dedication over past seasons and fully deserve their success.