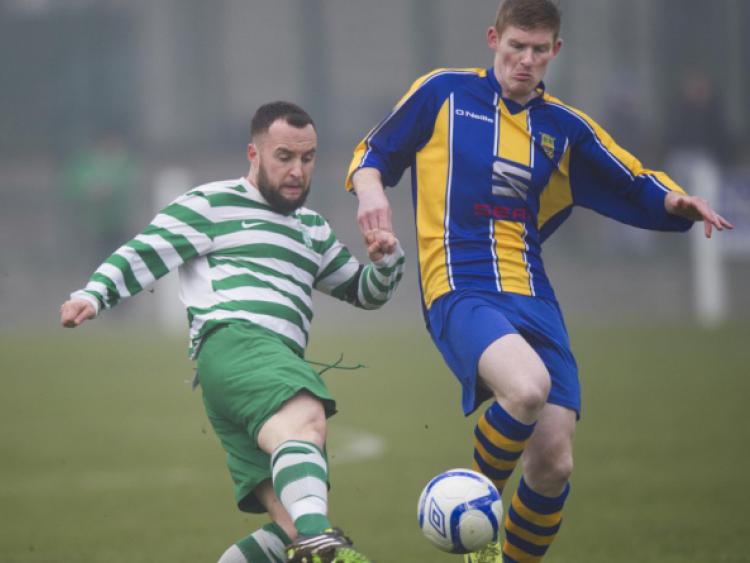 Saints were always the better team against a Donohill side that tried hard but didn’t have the same goal threat ultimately as the Saints who are candidates for promotion on this effort.

Danny O’Brien had a couple of efforts before he made it one nil on twenty six minutes, easily beating the keeper after being released by Stephen Quinn.

Paul O’Dwyer then burst through but saw his shot saved by Shane Leonard and Brian Boca Glasheen missed a few good chances to increase the lead. It was two-nil four minutes before the break when Jason Sutton found himself in space in the box and with the keeper hesitant he fired home into the bottom corner of the net. The second half continued much in the same vein with Saints almost in second gear and had the luxury of using their bench on a foggy day and should have put more goals on the board despite the result never being seriously in doubt.

Moyglass put the finishing touches on what has been a truly terrible season for a misfiring Killenaule side at home under lights in Moyglass last Friday night.

The home side were the better team throughout the first half and spurned a number of good chances before Keith Phelan was fouled in the Killenaule penalty area and Mick Lacey fired home the resultant spot kick.

The visitors did however begin the second half brightly and dominated much of the possession without ever threatening the United goal. Things got worse for the home side when they were reduced to ten men midway through the half but this seemed to galvanise the hosts and they doubled their lead five minutes later when Denis Fahey found Paul Horan with a cross and Horan turned and volleyed the ball to the net. They made sure of all three points inside the final five minutes when Fahey headed home a Mick Lacey corner kick, leaving still pointless and condemned to relegation.

Dualla continued their promotion fight when they won this hotly contested local derby with two second half goals. The game was a fierce battle from the start and Cashel lost their goalkeeper after only fifteen minutes with a nasty facial injury when he saved bravely at the feet of the inrushing Stevie Coppinger who was lucky to escape sanction.

Despite both teams putting in huge effort neither was able to break the first half deadlock, and Dualla took the lead five minutes into the second period when Coppinger played a beautiful through ball which was finished with a great strike from Daragh Hickey from just outside the penalty area. Cashel huffed and puffed to try to get back into the game, but the visitors secured all three invaluable points when Ned Butler headed home from a corner in the sxty fifth minute.

Stuttering of late, St. Kierans got their promotion push back on track against a demoralised Kilmanahan team who were already relegated before the start of last Sunday’s game. It took the home side twenty minutes to open the scorin, and they did so through a Gary O’Dwyer effort from inside their opponents penalty area. They could have doubled the lead two minutes later but missed a penalty, and were then awarded a second spot kick on the stroke of half time. This time Johnny Byrnes made no mistake, giving his side a two goal cushion at the break. Things got much better for the hosts in the second half and ten minutes in made it three with a Johnny O’Gorman goal, before three more goals in a short space of time by Shane O’Neill, James English and Niall Murphy put the destination of the points beyond all doubt. A twenty five yard effort by Joe Galko five minutes before the end was simply the icing on the cake for the home side.

Suirside maintained their position at the top of Division 3, but only after getting an early shock when the visitors took the lead through Pa Ryan after two minutes. It didn’t take Suirside long to respond however, and they were level within six minutes, when Alan Ward finished to the net after being put through by Darren Sweeney. Ward returned the favour to Sweeney in the 21st minute to put Suirside into the lead, and Ward was at the centre of things in the 36th minute when he made it three from the penalty spot after John Darmody was fouled in the area.