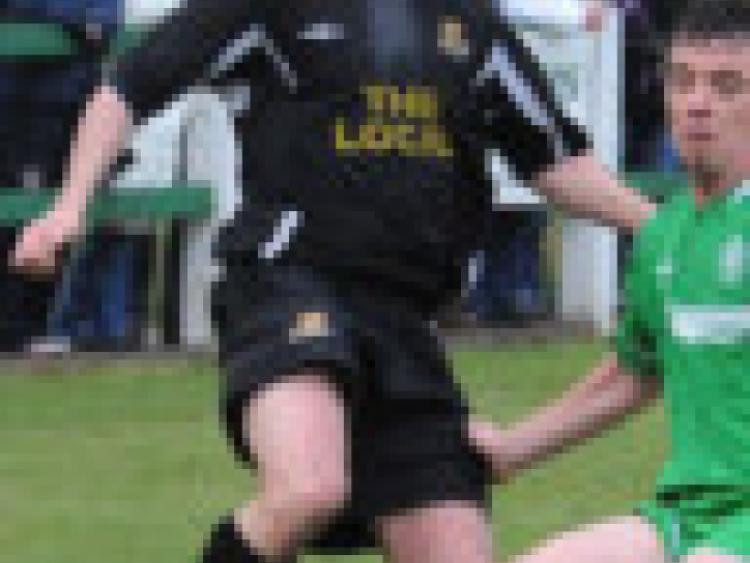 A goal in each half from Aaron Moroney saw the Tipperary Southern and District League advance to the quarter-finals of the National inter-league competition following a 2-0 win over the Defence Forces.

A goal in each half from Aaron Moroney saw the Tipperary Southern and District League advance to the quarter-finals of the National inter-league competition following a 2-0 win over the Defence Forces.

Played in ideal conditions at Cooke Park, Tipperary this was a hard fought victory rather than a spectacular one. TSDL were forced to play without long term injured trio Paul Breen, Jimmy Carr and Evan Maguire but were able to recall James Walsh, Aaron Moroney and Pa Quinn.

The Defence Forces, who can draw their players from throughout the country, dominated the opening quarter hour with swift attacks down the flanks. Tipp were under constant pressure and good efforts from Steven Fisher (Quay Celtic Dublin) and Richard Crowe (Old Bridge Clonmel) were just off target. The home side found it hard to find their rhythm and looked off the pace in that opening period. With the midfield trio of Ritchie Ryan, Cooper Fahey and Kevin Waters eventually coming to terms with midfield Tipp began to create a few openings. Aaron Moroney, David Slattery and Pa Quinn came more into the game, teamed up well and looked dangerous in possession. On 18 minutes Slattery found Moroney in a good position but the keeper saved at his near post. Two minutes later TSDL went ahead with a well worked goal. Kevin Waters won possssion on the left, sent a high cross to the far post which was met perfectly by David Slattery whose header found Aaron Moroney unmarked in the box and he coolly slotted into the corner of the net. It gave TSDL the confidence they needed and the pendolum of possession swung Tipps way. On the half hour Simon Scully, who was struggling with an injury, had to be replaced which saw Ritchie Ryan move into the middle of the back four and Shane Flynn take over on the left side of midfield. Five minutes before the break Tipp should have gone 2-0 ahead when a rasping shot from Kevin Waters hit one upright, went across goal and hit the other upright before bouncing to safety.

The Defence Forces started the second-half as they began the first and should have equalised within a minute of the restart. A marvellous five man move carved open the Tipp defence and a well hit shot looked destined for the roof of the net only for goalkeeper Evan Comerford to tip magnificently over the bar. Again the home defence withstood the visitors early pressure. Gradually Tipp regained control with Shane Flynn causing problems down the left flank. His jinking runs forced three successive corners and on the hour mark one of these saw goal number two arrive, a well struck inswinging flagkick found the head of Aaron Moroney and he nodded home. Play swung from end to end, Defence Forces having lots of possession but Tipp always looking the more likey to score on quick breaks. Cooper Fahey came close with a long range effort and a thundering twenty yard shot from Pa Quinn came back off an upright. The superior fitness of the visitors saw them in total control in the last ten minutes but the excellent back four were impregnable and the home side ran out winners.

The TSDL are now at home to the Inishowen League from Donegal but no date is arranged yet. The winners of that tie are at home to either Limerick or Wexford in the semi-finals. The holders, Dublin AUL, play Meath in the other semi-final.

Evan Comerford: Didn’t have much to do but always in command of his area. His handling and distribution were first class and he will be happy with a clean sheet.

Chris Higgins: On way back from long term injury. Showed here he is not far off his best form. Very assured with defensive and attacking play.

Trevor Cosgrave: Undoubtedly his best ever display in the TSDL jersey. He was confident throughout and never put a foot wrong.

Simon Scully: Obviously carrying an injury from early on and had to be replaced on the half hour mark.

James Walsh: Showed all of his vast experience when needed. Was a tower of strength constantly organising and encouraging those around him.

Thomas Fahy: A typical Cooper Fahy display. Tigerish as ever in midfield he harassed opponents throughout with hard tacking and robust play.

David Slattery: Was always dangerous down the right flank. His passing was first class and his header creating the opening goal was well won under pressure

Aaron Moroney: Turned the clock back with this display. Absolutely up for it. Ran himself into the ground. His two goals showed a goalscorer never loses that instinct.

Pa Quinn: Worked tirelessly throughout. Turned up in attack and defence when needed and denied a wonder goal by the width of the upright.

Kevin Waters: Inspirational captain and leader. His absolute dedication to the TSDL team has to be admired and noted. Never put a foot wrong. A pleasure to watch.

Shane Flynn: Introduced for Scully, a lad with a bright future. He will have learnt from this experience. Did well on left flank and unlucky not to get on scoresheet.

Alan Hayes: Introduced for Slattery when backs were to the wall. Helped out in midfield and teamed up well with those around him.

Michael Fitzgerald: Introduced in last minute for Moroney. Not on field long enough.