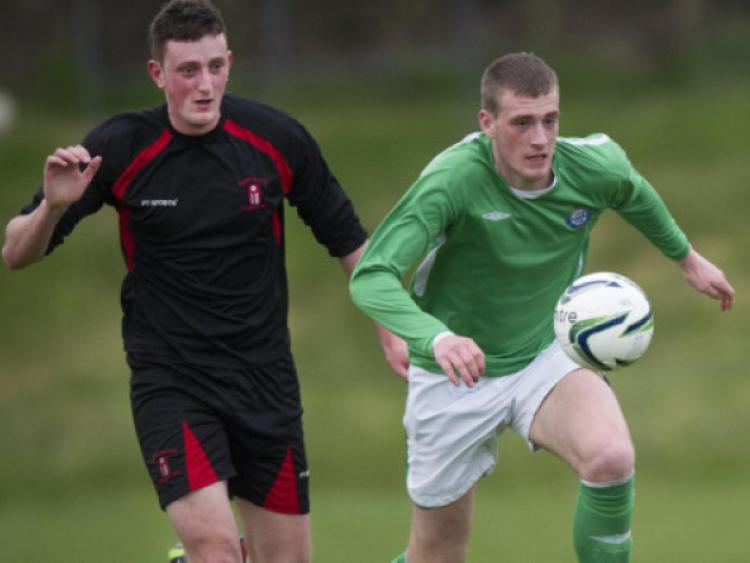 Clonmel Celtic failed in their bid to complete a league and cup double when losing the Tipperary Cup final to Peake Villa at Cashel.

Clonmel Celtic failed in their bid to complete a league and cup double when losing the Tipperary Cup final to Peake Villa at Cashel.

After just three minutes Celtic’s Ian Fahey tested the keeper with a stinging shot which Stephen Ryan saved well. Ten minutes later Brian Waters set up Paul Kennedy but his effort came back off the crossbar.

It was desperate defending by Peake but they weathered the storm and gradually gained their composure. As the half progressed Peake showed their attacking capabilities with Gary Lyons in particular creating opportunities. Peake had their first real chance when striker, Noel Kent, showed good control before shooting narrowly wide. As the first-half came to an end Celtic had one more clear cut opportunity but Johnny Cagney’s effort struck the woodwork.

Peake Villa opened the scoring within two minutes of the restart with a good goal. Jody O’Mahoney broke down the wing before sending over a perfect cross and Gary Lyons headed powerfully to the net. Celtic were rattled and Peake held the upper hand briefly.

Gradually Celtic regained control with Peake defending deeper and deeper as the half wore on. It was real backs to the wall stuff but the Peake back four of Jody O’Grady, Ted O’Connor, Alan Leahy and Sean Wade, backed up by excellent goalkeeper, Stephen Ryan, performed heroics keeping Celtic at bay.

The equaliser eventually came in the 79th minute when a sublime pass from Andrew Cosgrave unhinged the Peake defence and Sean O’Hara coolly struck home. Peake should have regained the lead in injury time when Noel Kent shot into the side netting.

With no further scoring extra time was necessary. In the early stages Noel Kent again caused problems in the box and appeared to be taken down en route to goal but no penalty was given. Justice was done shortly afterwards when a good move between Danny Maguire and Noel Kent saw the ball played to Jody O’Mahoney and he restored the Peake Villa lead. This goal proved to be the winner as Celtic failed to pull back the deficit. The final whistle was greeted with wild scenes by the Peake Villa team, mentors and supporters. For Clonmel Celtic it was bitter disappointment as they suffered their first domestic defeat of the season. However they can have few complaints and can be proud for contributing so much to such a thrilling final.