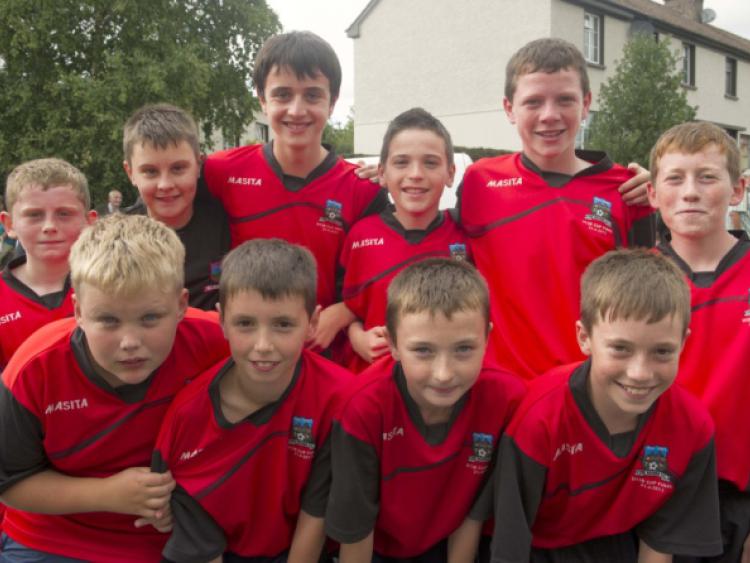 Clogheen’s link to two famous sons of Irish soccer was celebrated in the village over the weekend.

Clogheen’s link to two famous sons of Irish soccer was celebrated in the village over the weekend.

Con and George’s father, Charles, served in the British Army in Kildare before a job as postman took him to Clogheen, where they lived in a house near the pedestrian crossing. During the village’s Gathering event held between over the weekend, members of the Moulson family visited Clogheen. Con Moulson was captain of the Republic of Ireland team in 1936 and 1937, while George was a goalkeeper and had three caps in 1948. George also played in the FA Cup semi final in 1939 in Old Trafford.

For The Gathering, a team from Grimsby in North England played against a local team in a re-enaction of that game and a Vee Rovers U14’s team won the inaugural Moulson Cup against a Fethard team. Many of Con and George’s relatives are currently living in Grimsby. Con and George’s father, Charles re-enlisted into World War I and sadly died shortly after - his name can now be seen amongst the fallen on the cross monument in Cahir and while his ancestors were in Cahir, they visited the monument and placed a wreath there in his memory. The group included John Moulson, a son of George, and Madge Hurley, whose sister, was the mother of the two brothers. They also did a tour of The Vee and visited other local attractions during their stay. Councillor Marie Murphy said that this connection only came to light in recent years and they thought that the year of The Gathering was the ideal opportunity to recognise the Moulson connection to Clogheen. The 1911 Census shows that both Con and George went to school in Clogheen.

“It was a wonderful community event, a weekend enjoyed by everybody” she said.

Cllr. Murphy praised the hard work of the local committee who organised the event.

FAI Chief Executive Officer John Delaney said it was fitting to remember the contribution made to Irish soccer by the two Moulson brothers who played for their country at a difficult time.

Over the weekend the international caps of George were on display while the FAI leader promised the Moulson family that the caps lost by his brother Con would be replaced. To mark the Fethard Moulson connection, teams from Killusty and Moyglass were involved in the weekend celebrations. Killusty (taking the part of the winners Wolverhampton) and a team made up of visitors (taking the part of Grimbsy) played out the 1939 cup semi final that George Moulson played in. He had been second choice goalie that day and was called on to line out when the first choice goalie pulled out at the last minute. George played but he was injured early on and Grimbsy had to continue the game with ten men and were defeated by Wolves on the day.