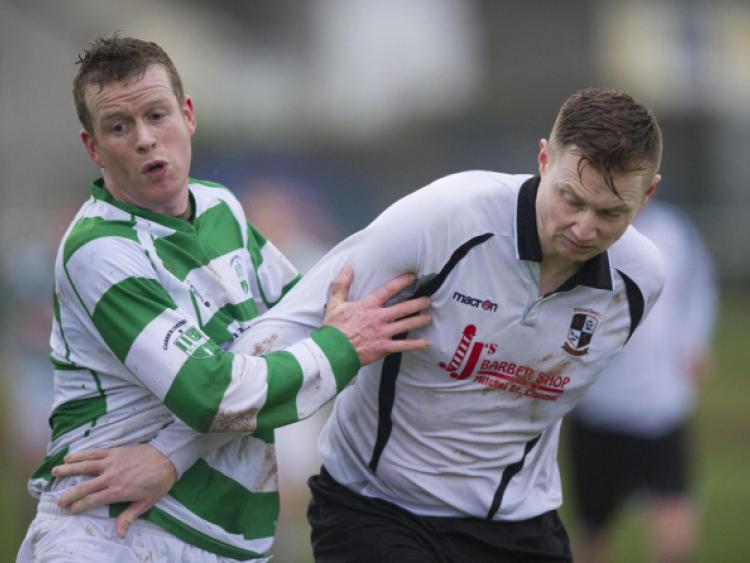 A game played in terrible conditions, Celtic needed a good result here if they were to sustain their challenge to win back to back league titles in the Premier Division.

The first half was a cagey affair with the heavy underfoot conditions making it difficult for both sides, and the teams went to the break honours even at nil all.

Ten minutes into the second half, the visitors finally broke the deadlock as Seanie O’Hara showed all his predator instincts in front of goal to shoot them ahead.

Once they took the lead, they settled down, and looked very comfortable, until with quarter of an hour on the watch, Noel Kent got a very well taken goal for the home side to level things up again.

However, their joy was short lived as minutes later, Darren Joyce re-established the lead for Celtic, and all three points were secured a minute from time, as with Villa chasing the game, Celtic broke away and O’Hara was left one on one with the keeper, a position from which he duly converted.

The result keeps the division very much a three way affair as Villa must now have very little chance of getting into the mix at the top of the table.

St Michael’s made the long journey to Roscommon on Sunday morning to take on Ballaghdareen in the FAI Junior Cup but they never made it as far as the pitch, when the game was called off as a result of the terrible weather seen over the past few weeks, leaving the pitch waterlogged. This was very disappointing for the large Tipperary contingent who travelled, but they will now look forward to a home draw when the match is refixed in a fortnight’s time.