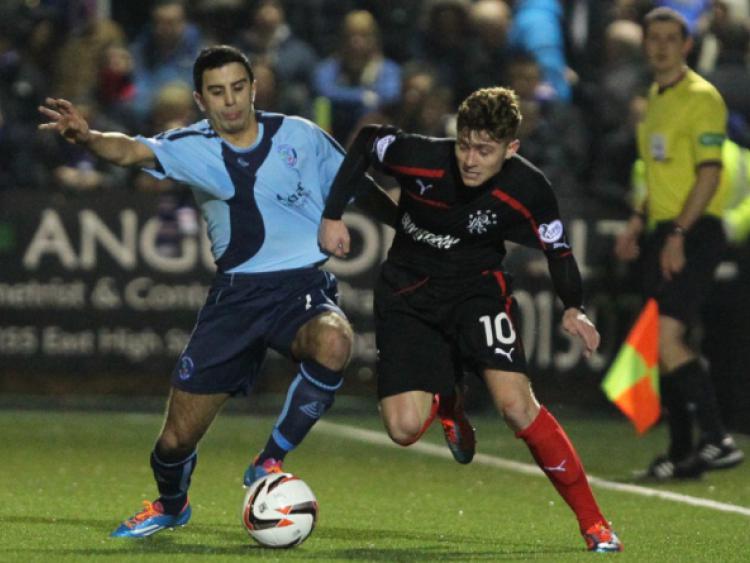 Rangers put their off-field problems behind them to chalk up another League One victory with a 2-0 win over Forfar Athletic at Station Park last night – although once again it was an almighty struggle at the tiny Angus ground.

Rangers put their off-field problems behind them to chalk up another League One victory with a 2-0 win over Forfar Athletic at Station Park last night – although once again it was an almighty struggle at the tiny Angus ground.

Steve Simonsen made his debut in goal for the visitors, replacing Cammy Bell whose wife gave birth to a baby girl earlier in the day.

Ally McCoist made two other changes from the East Fife game with Richard Foster and Lewis MacLeod coming in for the suspended Ian Black and Andy Little, who was on the bench.

It was the home side who threatened first in four minutes when Martyn Fotheringham’s deep cross found Stuart Malcolm whose header came back off the top of the crossbar.

As on previous visits to Forfar, the Ibrox men were finding difficulty in adapting to the artificial pitch.

Lacking imagination and creativity, the visitors were devoid of ideas and seldom threatened the home goal.

Fotheringham was outstanding for the home side in the middle of the park- one thirty yard deflected drive in 34 minutes being held by Simonsen.

With the interval fast approaching Gavin Swankie (Forfar’s two-goal hero in August) almost came back to haunt Rangers when his volley was blocked by Simonsen after Dale Hilson’s cross was half-cleared by Lee McCulloch.

Seconds before the break Rangers at last threatened when a superb cross-field pass from Dean Shiels released Fraser Aird on the right, the winger’s low drive being parried by Douglas who also blocked Bilel Mohsni’s effort from the rebound.

Referee Stephen Finnie had appeared card-happy during the opening half – and when he yellow-carded Gary Fusco in 51 minutes for a deliberate body-check on Lee Wallace he astonishingly ignored the same player hauling down MacLeod moments later.

It was no surprise when Fusco was substituted immediately afterwards – and just before the hour Lee McCulloch came close to breaking the deadlock when his thundering 25-yard free-kick was touched over by Douglas. The referee denied Rangers two stonewall penalties in the space of as many minutes.

The first came when a cross-ball into the home area found Mohsni unmarked at the far post only to be barged from behind as he prepared to head into the net then shortly afterwards a Jon Daly drive was blatantly handled by Darren Dods.

Forfar were far from out of it however – and Simonsen had to make a superb one-handed save to prevent a Lee Wallace own goal on eighty minutes then with the final whistle fast approaching Hinsen’s twenty-yard free-kick flashed inches wide.

Templeton sealed the victory however in 88 minutes when he broke free cutting in from the left before rifling home a right-foot shot from the edge of the area.