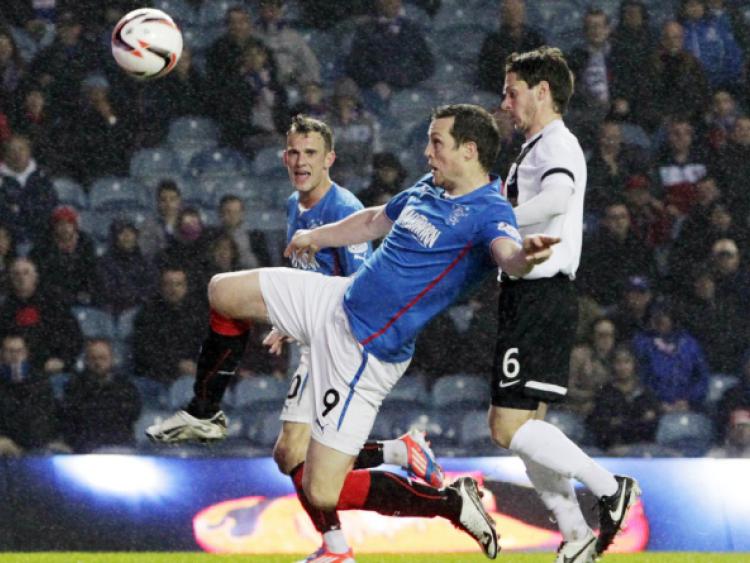 Two second-half goals from Bilel Mohsni gave Rangers a narrow 2-1 win over Ayr United at Ibrox – but this was a hard-fought encounter with the Light Blues only just meriting the victory.

Two second-half goals from Bilel Mohsni gave Rangers a narrow 2-1 win over Ayr United at Ibrox – but this was a hard-fought encounter with the Light Blues only just meriting the victory.

Ally McCoist made one change from the win over Stenhousemuir with Arnold Peralta returning from injury in place of Kyle Hutton.

The visitors had plenty at stake as they were chasing a Play-Off spot – and they took the play to Rangers from the opening minutes.

The game however took quite some time to come to life, Jon Daly firing over in nineteen minutes from a Fraser Aird back-heel.

Ayr were certainly not just here to defend – Michael Donald bursting through the home defence on the half-hour mark only to be denied by the outrushing Cammy Bell.

Lee McCulloch should have broken the deadlock just before the interval when the ball broke to him at the back post from a Daly head-flick – only to blaze well over.

An unimpressive first-half ended goalless – gone was the drive, creativity, pace and hunger for goals of Saturday, and the Light Blue legions were far from happy at the interval.

The deadlock was finally broken eight minutes after the restart when Bilel Mohsni – completely unmarked – rose to head home a Fraser Aird corner.

One wonders how many ‘Gers fans amongst the crowd reflected on the two equally simple chances missed by the defender in the Challenge Cup Final.

Rangers had now stepped up the pace – and just before the hour almost grabbed a second when the ball broke to Daly from a Peralta cutback only for the centre’s volley to be blocked by Hutton.

Ian Black ought to have made the game safe four minutes later when clean through on a superb pass from Steven Smith only to shoot straight at Hutton.

The Ibrox men were well on top – yet somehow contrived to concede an equaliser in the 69th minute when Peralta lost possession on the edge of the area, allowing Scott McLaughlin to find Alan Forrest who made no mistake with his finish.

Ally McCoist promptly made a double substitution, throwing on both Nicky Clark and Calum Gallagher in place of Arnold Peralta and Dean Shiels.

Ayr now appeared just as likely to score as did Rangers – but it was Mohsni again who scored what proved to be the winning goal when he netted from close range after Clark’s header from a Nicky Law chip was parried by Hutton.

It was another three points – but it had been too close for comfort for the 40,651 spectators.