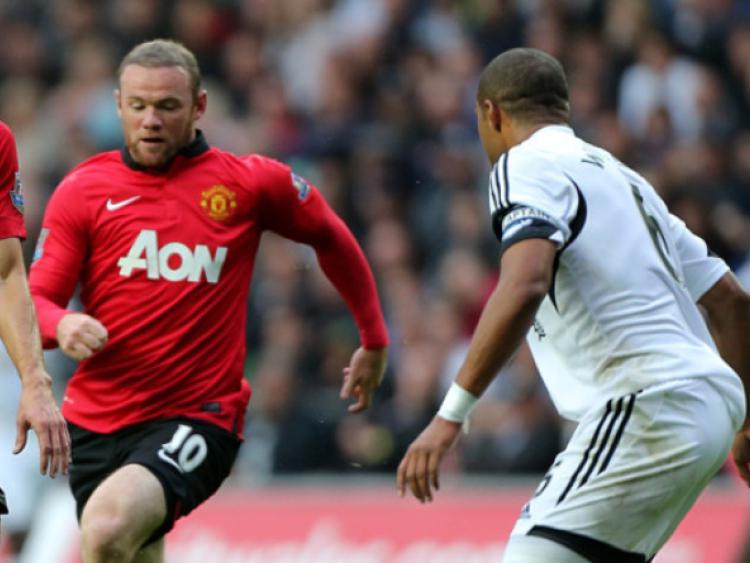 After missing the entire pre-season campaign due to hamstring and shoulder injuries, Rooney was introduced as a substitute 30 minutes from the end of Saturday’s 4-1 win at Swansea.

Though obviously some way short of match fitness still, the 27-year-old still had a significant impact, setting up goals for Robin van Persie and Danny Welbeck as David Moyes’ reign as United manager got off to a perfect start.

Doubt remains over his future, though.

Having had two bids turned down for Rooney already, Chelsea manager Jose Mourinho seems intent on having a third attempt to prize the England forward away from Old Trafford.

And it was noticeable at the Liberty Stadium that Rooney did not celebrate United’s goals with his team-mates, although on the latter occasion at least, that had something to do with the kick on his Achilles he sustained as he set up Welbeck’s impudent chip.

It appears there are no problems in the camp though, with Carrick backing a stance taken by the United supporters, who cheered Rooney on his arrival.

“I didn’t hear the fans but he has given this club an awful lot. The fans support him and so do we.

“He came on and looked good. He set up two goals. That is what he is all about.

“We played for each other to get the win. He was certainly part of that.”

In fairness to Rooney, he is not the type to down tools, no matter what position he finds himself in.

However, he is in an awkward spot, having failed to commit his future to United, despite having plenty of opportunity to do so.

The brutal truth is that Rooney is no longer the central figure within the Red Devils camp.

Robin van Persie is now in that position, and it appears there are also alternatives for the role of back-up.

Shinji Kagawa proved at Borussia Dortmund what an impressive player he is, although has yet to have the same impact at United, whilst Javier Hernandez’s goalscoring prowess is well known, even if he is currently sidelined with a hamstring injury.

And it appears Danny Welbeck is intent on providing last term’s miserable goalscoring form was a blip.

He eclipsed that figure in one impressive 90 minute performance at the Liberty Stadium, the impudent chip for his injury-time second a particular gem.

And that will help silence both the doubters and the dressing room wind-up merchants, who have not been afraid to make Welbeck aware of his meagre contribution.

“We have had a bit of banter with Danny,” said defender Phil Jones.

“But he is a confident lad. It speaks volumes for him that he stuck two away and the last one was a great finish.”