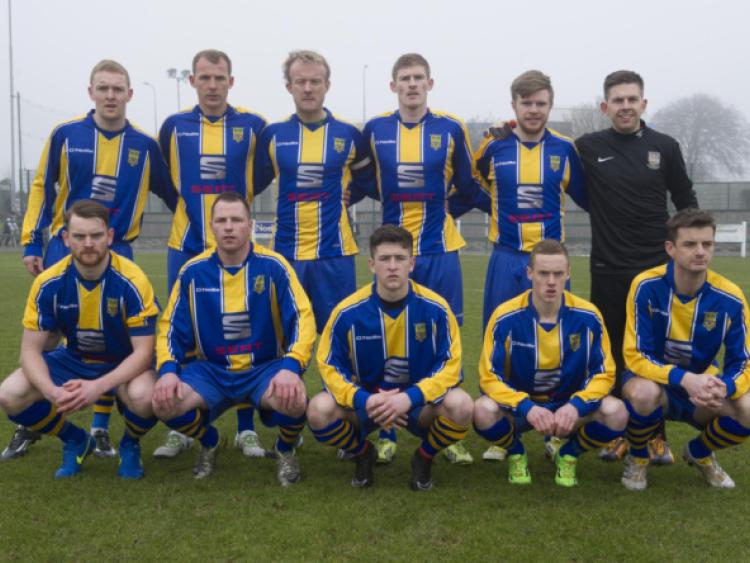 Holders St Michael’s wore down a resolute Evergreen side that pushed them all the way at a cold and foggy Cooke Park on Sunday last in the Round of 16 of this season’s Junior Cup.

Holders St Michael’s wore down a resolute Evergreen side that pushed them all the way at a cold and foggy Cooke Park on Sunday last in the Round of 16 of this season’s Junior Cup.

It could have been a different game altogether though if Saint’s Mark McGrath had converted a gilt edged chance after only thirty seconds when he was gifted the ball by a wayward back pass but watched as his left foot shot went straight at visiting keeper Pat Holden.

Minutes later McGrath almost set up Irish international Jimmy Carr, but this time Carr flashed his effort just wide of the far post. The visitors eventually worked their way into the game and had chances mainly through Chris Whearty who was a handful for the home side all afternoon. Saints though had the lion’s share of possession, but shunned numerous chances in the first half. The best chance for Evergreen came from a mistake in the Saints’ defence when Aaron Wall had to be quickly off his line to clear an under hit back pass, but eventually both teams went to the half time break level.

After the interval a resolute Kilkenny side were content to soak up pressure and look for chinks in the homes side’s armour on the break. This made it tense for the home fans and they were almost shocked on the hour mark when another mishit back pass was not dealt with and Whearty chipped Aaron Wall with a shot that almost crossed the line before it was scrambled away to safety.

Stunned back into concentration by this near miss, the home side finally got the breakthrough twenty minutes from the end when a deep cross by David Slattery was gathered at the far post by Jimmy Carr who beat a defender before hammering home from less than six yards out.

You could almost hear the sighs of relief from the Cooke Park faithful as both sides began to use their benches in an attempt to influence the final result. Evergreen were now chasing the game and becoming ever more anxious as the clock wound down which led to them leaving gaps at the back. This was finally exploited by a lightening Saints break in stoppage time. David Slattery was lurking close to the goal and when keeper Holden attempted to pass short to begin an attack, Slattery pounced and fired home to send his club into the last eight of the competition they won in some style last season.

St Michael’s travel to Cork this weekend in the Munster Junior Cup to play Village United.