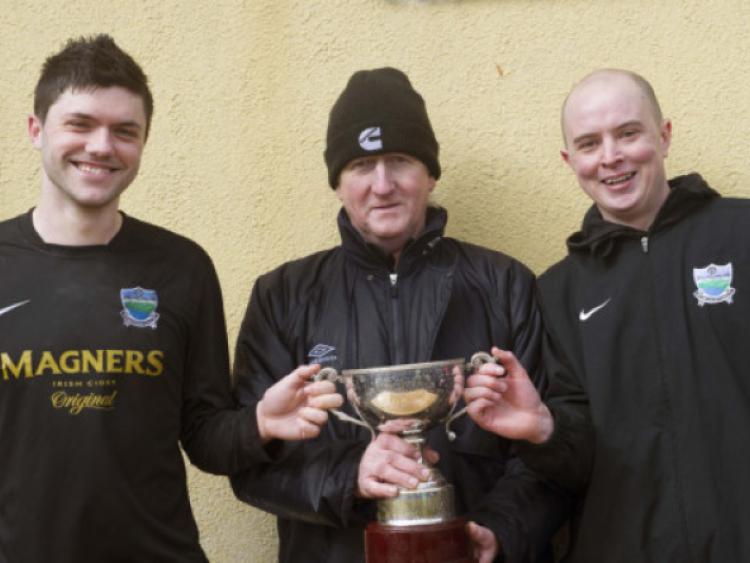 Redmondstown captured the Peter O’Reilly Cup for the first time when they defeated third division league champions Ballypatrick at Clonmel By Pass. This is just reward for a team who battled hard all season to secure promotion to the second division.

Redmondstown captured the Peter O’Reilly Cup for the first time when they defeated third division league champions Ballypatrick at Clonmel By Pass. This is just reward for a team who battled hard all season to secure promotion to the second division.

Winning the Peter O’Reilly cup is the icing on the cake and they can bask in the glory through the off season before preparing for stiffer challenges next term. For Ballypatrick this trophy is proving elusive as they finish runners-up for the second time in three seasons. They achieved their target of third division champions and like Redmondstown can look back on a very positive season.

Redmondstown had the elements behind them in first half and started brightly. They created several chances, the first when Darren Murphy shot from the right and tested the keeper with a low strike. Barry Hanley then cut in along the end line but his pull back to Wiliam Kelly was struck high and over the bar. Gino Lonergan then tested the keeper with a strike from a free kick from 35 yards. Ballypatrick grew in to the game and Redmondstown keeper Anthony Dempsey came to their rescue with great saves , first from Barry Kiely and then from Paulie Landers just before half time.

Ballypatrick now had the advantage of the very strong wind and they started in attacking mood. Mark Olney cleared off the line for Redmondstown from a Barry Kiely effort before Anthony Dempsey made a marvellous save from a long range strike to keep Redmondstown in the game. The crucial goal arrived on the hour . A clearance by the Ballypatrick defence was met on the volley by Robert Bates and his screamer from 25 yards sailed all the way to the net. Ballypatrick now gained the upper hand and threw everything at the Redmondstown goal but the defence was rock solid and dealt with the onslaught. Ballypatricks best chance came deep in stoppage time. A long ball into the box fell to the feet of Barry Kiely at the far post but he drove harmlessly high and wide. The final whistle went following the kick-out much to the delight of the large Redmondstown support.

After the game the Peter O’Reilly Cup was presented to a jubilant Redmondstown by TSDL treasurer Richard Power who praised both teams for serving up such a good game in very difficult conditions.