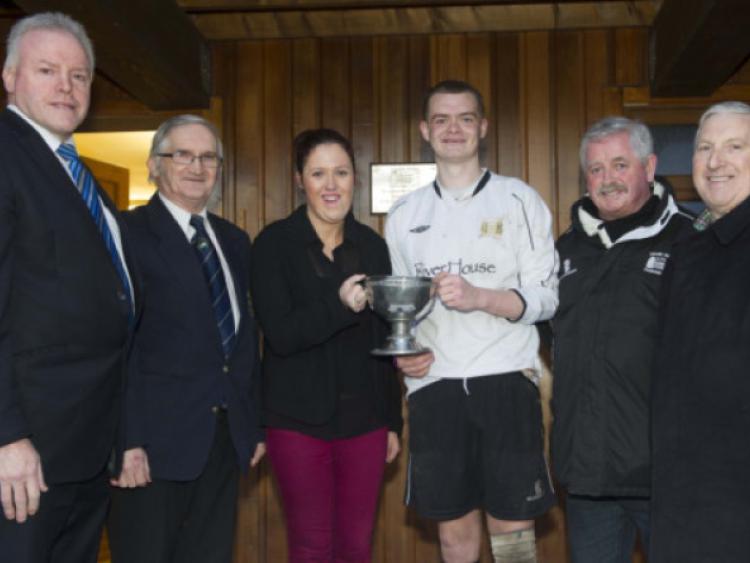 Cahir Park added the Paddy Purtill Cup to the already won first division shield and league with victory over a gallant Rosegreen Rangers at Cahir Park.

Cahir Park added the Paddy Purtill Cup to the already won first division shield and league with victory over a gallant Rosegreen Rangers at Cahir Park.

A golden patch by the winners midway through the first half wrapped this up, a ten minute period when they scored three goals. The game was over as a contest then although Rosegreen battled hard to get back into the game.

The opening quarter, played in a continuous downpour, was even enough and although Cahir had more possession and created some good chances with fast flowing football Rosegreen confidently defended allowing Cahir few shots on goal. The constant pressure eventually told and in the twenty second minute the visitors conceded an unnecessary penalty and Jimmy Darcy opened the scoring from the resultant spotkick. Five minutes later it was 2-0 when once again the defence allowed a harmless cross find its way to Jimmy McGrath in the left and his low shot went to the far corner of the net. Rosegreen had hardly reorganised themselves when they found themselves 3-0 down. This time Paddy O’Donnell gained possession on the edge of the box, sidestepped several half hearted tackles before unleashing an unstoppable shot to the net. Rosegreen were really hanging on now and only the crossbar prevented number four arrive. Rosegreen were relieved to hear the halftime whistle.

It was a different story after the break as the visitors reorganised, steadied the defence and held their own in midfield. Cahir continued to create opportunities but never with the real threat of the first half. Indeed Rosegreen created several scoring chances on quick breaks and could have reduced the deficit with better finishing. As the half progressed the play deteriorated with Cahir playing a cautious game, intent on holding their three goal lead rather than getting more adventurous. Denis Peters was unlucky when he saw his cheeky lob sail just over the keeper and crossbar. The best goal of the game came just on the stroke of fulltime when Cahir won a free kick thirty yards from goal and Eoin Farrell unleashed an unstoppable shot to the roof of the net.

So Cahir march on and have now made a clean sweep of first division honours. They were very impressive in this decider particularly in the first-half and victory was never in doubt. Best for Cahir were Sean Kiernan, Shane McGrath and Paddy O’Donnell. Rosegreen were best served by Frank Culleton, Trevor Downey Michael Lowney and David Brabson (is that the David Brabson I was writing about over 20 years ago? If so, he hasn’t aged a day). Rosegreen, to their credit never gave up and battled bravely to the end. Understrength by injuries and suspensions they will now focus on winning the second division title when they take on Tipperary Town in Thursday night at Cooke Park Tipperary.

After the final TSDL treasurer Richard Power paid tribute to all concerned with the final. Sponsor Hugh O’Donoghue (Shamrock Lounge Cahir) thanked all those who contributed to the occasion and sent special get well wishes on behalf of all present to league P.R.O. John Butler. Also nice to see so many of the Purtill family present to take part in the presentation of the Paddy Purtill Cup..