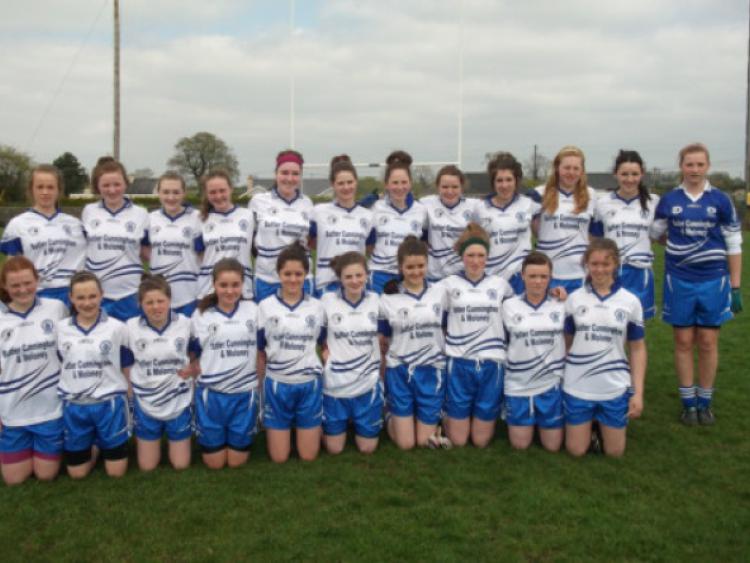 Training continues Monday only for U8/U10s and Mondays and Wednesdays for U12/U14. Membership now falling due and should be paid to Marie Holly or any of the club mentors at training on or before May 27th.

Training continues Monday only for U8/U10s and Mondays and Wednesdays for U12/U14. Membership now falling due and should be paid to Marie Holly or any of the club mentors at training on or before May 27th.

Our u12s played their first game against Thurles last Wednesday. Although Thurles proved too strong we were delighted to see the effort from our girls in their 1st game and we look forward to these girls improving with each game. The girls were due to play away to Mullinahone last Monday 20th.

We played Mullinahone at home last week. Despite dreadful conditions it was a good game with some good scores and resulted in a draw. We played Fethard at home last Sunday and were deserved winners 3-5 to 2-6. They defended great and the forwards made great use of the opportunities that arose. Following the game the girls were in great voice in the dressing-room when they sang Happy Birthday to Margaret!!

Well done to Christina Brennan on her well deserved Munster title with Tipperary U14s who defeated Clare in the recent Munster Final. We have no doubt but Christina will wear the Blue and Gold again in the future.

Primary Games Best of luck to all the club girls who have qualified for the Primary Games - we wish them well as they represent their schools, parishes and county in the upcoming weeks.

The U16 season came to an end when our girls were defeated by Cahir in the County Final. Thanks to the girls for their efforts at training and matches and thanks to the parents for their support.