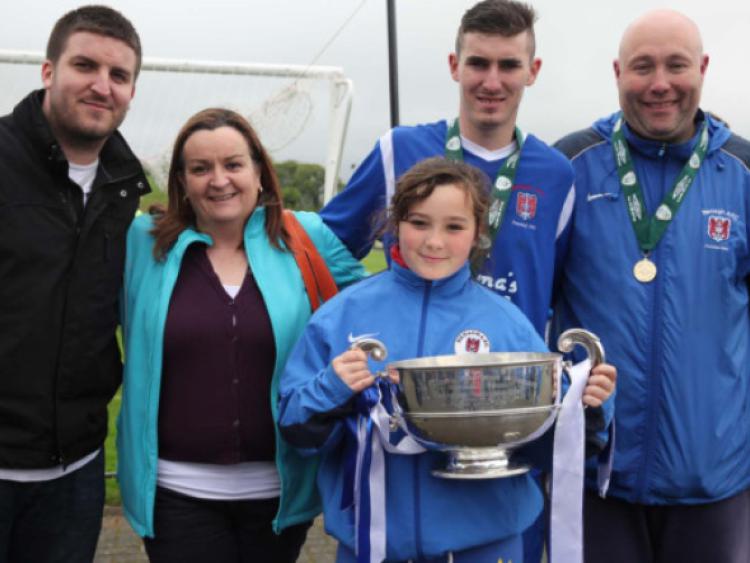 Nenagh AFC joined the elite of Irish soccer teams on Monday when they won their first FAI cup, the Umbro Youths Cup, beating Evergreen of Kilkenny on penalties.

Nenagh AFC joined the elite of Irish soccer teams on Monday when they won their first FAI cup, the Umbro Youths Cup, beating Evergreen of Kilkenny on penalties.

The win bridged a 20-year gap, with St Michael’s of Tipperary Town the last county team to win an FAI final back in 1994.

Nenagh were trailing at Castlecomer on Monday by a goal from Evergreen in the 35th minute before Cian Darcy brought the sides level with 11 minutes left on the clock. Extra time saw no change in the scoreline, and Cillian Fitzpatrick proved his value in goal saving two spot kicks while Ryan Gilmartin, Ben Banaghan, Ciaran O’Reilly and Craig McDonnell all slotted home.

Team manager John Gilmartin, whose son Ryan is team captain, said the win meant so much to the players, coaches, managers and parents.

He paid particular tribute to his co-manager Dave Rooney and all the work he has done over the years.

“A lot of hard work has gone into this. It was great to see a lot of the old timers there, guys who set up the club over 50 years ago. To see grown men cry at the end shows it meant a lot,” he said.

John paid tribute to Evergreen and said it was never easy to lose a final, especially on penalties. “It was a nailbiting game and there wasn’t a dirty tackle in it. Naturally, I’m deligthed, but to lose a final on penalties is sad.”

John said the group of players had worked hard and were dedicated to playing football. “They just live and breath football and they have so much respect for each other and their peers,” he said.

Nenagh town was decked out in blue flags over the past few days, and John said: “We got fantastic support from local soccer clubs as well as Nenagh Eire Og. When you get to an FAI final it is an occasion for everyone.”

He paid tribute to the work FAI development officer James Scott has done for the game in North Tipperary. “James is a fantastic role model, a great coach and a gentleman. I have learned a lot from him. To see his work with the young lads and see them at the end of the match wanting to have their photos taken with the team and see their medals shows what they hope to aspire to,” he said. “And you always find that when a child gets involved in sports, they very rarely get involved in trouble.”

Pointing to how Tipperary’s Shane Long had gone on to the top of the game, he said the club had two players - Dylan Kennedy and Ryan Gilmartin - who are on trial at present with Limerick FC. “Nenagh AFC does promote players to take their skill to the next level, and we always tell them that if it doesn’t work out, they are always welcome back into the club,” he said.

For John, the win was, of course a “proud day” for him, son Ryan on the team. “When you win you have the emotions of a manager and a dad. One minute I’m giving out and next I’m saying I’m proud of you. It can be hard as you are both a mananger and a dad,” said John, who revealed that football was in Ryan’s blood as his grandfather was Peter O’Reilly of St Michael’s.

The season is not over yet for Nenagh AFC, who are still in the hunt for the league title and take on Peake Villa of Roscrea in the quarter-final of the Joe Delaney Cup, which they are hoping to retain. With three cup successes already this season, there is every chance the club could take five trophies this year.