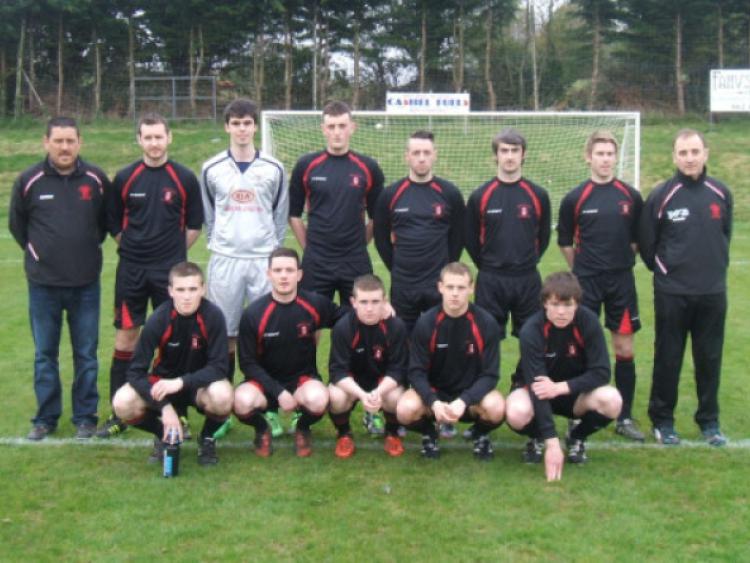 Tipperary Cup Final Peake Villa 2 Clonmel Celtic 1 (aet) PEAKE Villa claimed the Tipperary Cup for only the second time in their history when they overcame hot favourites Clonmel Celtic in an absorbing game in Cashel Town grounds last Thursday night. Going into the game as rank outsiders Villa produced a performance of the highest quality in which each player played his part in a tremendous win and while Celtic could claim that luck was not on their side on the night Villa never panicked and stuck to their game plan.

Tipperary Cup Final Peake Villa 2 Clonmel Celtic 1 (aet) PEAKE Villa claimed the Tipperary Cup for only the second time in their history when they overcame hot favourites Clonmel Celtic in an absorbing game in Cashel Town grounds last Thursday night. Going into the game as rank outsiders Villa produced a performance of the highest quality in which each player played his part in a tremendous win and while Celtic could claim that luck was not on their side on the night Villa never panicked and stuck to their game plan.

As expected Celtic, as League winners, started the game at a high tempo and had Villa in trouble for the first ten minutes. Villa keeper Stephen Ryan, who had an excellent game, had to be alert after five minutes when he saved well and minutes later the Clonmel side hit the post and saw another header go just wide. Peake settled into the game after the early pressure with Tony Ruth and Gary Lyons prominent in midfield and while they continued to frustrate the best efforts of the opposition Villa were always dangerous on the break with Noel Kent up front as the sole striker tormenting the Clonmel defence.

Villa’s best chance of the first half came when Gary Lyons put Noel Kent through but his shot from a narrow angle hit the side netting and just before the break Celtic saw another effort come back off the crossbar.

The second half was only minutes old when Villa took the lead with a well worked goal. Jody O’ Grady, who won the Man of the Match award, played a long ball to Noel Kent who controlled it well and released Jody Mahony on the right who ran to the end line and crossed for the inrushing Gary Lyons to place his header into the corner of the net to the delight of the large Villa following and shock of the Celtic players. Minutes later Noel Kent released Gary Lyons who saw his shot saved and almost immediately Villa keeper Stephen Ryan pulled off a great save to deny the Clonmel side. Jody O’Grady had a good shot just wide but as the half progressed it was the more experienced Celticwho began to dominate possession but they could find no way through an excellent Villa defence well marshalled by the experienced pair of Ted O’Connor and Alan Leahy with Sean Wade having a great game at full back. The crossbar came to Villa’s rescue again on seventy minutes but the pressure finally paid off for Celtic with ten minutes remaining when a through ball was finished to the net despite the best efforts of keeper and defender to prevent the goal. With minutes remaining the Villa keeper made another superb saveto keep his side in the game and Villa almost won it with the last kick of the game but Noel Kent saw his shot come back off the post.

Extra time saw a revitalized Villa come more into the game and both sides went in search of a winner. Villa were denied a blatant penalty five minutes into extra time when Noel Kent was taken down in the box just as he was about to shoot but Peake got their just reward minutes later when David McGuire twice won the ball in the middle of the field before laying it off for Noel Kent who flicked it on to Jody Mahony who beat the advancing keeper with a cracking shot. The second period of extra time saw Villa absorb constant pressure from the Clonmel side but with every player, including substitutes Mattie Stakelum and John McLaughlin, putting their bodies on the line Villa held out to record a historic win much to the delight of the large Villa following.

All the players received their winners medals after the match before Villa captain Alan Leahy was presented with the Clonmel Credit Union sponsored Tipperary Cup which he accepted on behalf of the players and thanked both Seamus Woodlock and Padraig O’Dwyer for their contributions to the team during the season. Villa youth’s team received a walkover from North Tipperary League side Arra Rovers in the Joe Delaney Cup and are now away to the winners of the Clonmel Town v Ardcroney tie in the semi final.

Our U/15 side were beaten by Clonmel Town in their last league game in the Tower Field last Wednesday night on a five three scoreline. Curtis Ryan scored twice for Villa with Conor Murphy the other Peake scorer.

On Saturday morning in Newhill our U/16 side suffered defeat to the same opposition in the runners up play off on a 2-1 scoreline with Aaron Ryan the Villa scorer.

Our U/12 side participated in a tournament run by Holycross FC last Sunday afternoon and they emerged as winners of when they beat Clodiagh Rangers in the final in a penalty shoot out. Well done to the team and coaches and our thanks to Holycross FC for the invitation.

Fixtures: Two cup finals this week for the schoolboy teams. On Bank Holiday Monday our U/14 side play Clonmel Town in their Cup Final in Bansha Celtic’s ground while on next Sunday our U/13 team take on Cahir Park in their cup final. The youth’s team play Clonmel Town or Ardcroney away on Saturday in the semi final of the Joe Delaney Cup.

FAI Summer Soccer Camp: This year’s camp will take place in the Tower Field from Monday 8th to Friday 12th July from 10.30am to 3pm each day. Our camps over the last few years have been a great success and are open to boys and girls aged 6 to 14 years of age. Book early online at www.summersoccerschools.ie and receive a free adult and child ticket to an International game at the Aviva Stadium. The price for the camp has been reduced to €65 but still contains all the elements of previous year’s camps. Visit the website for more details or contact Liam Ryan at 087 2350278 for any queries.

Sympathy: The club sends its sympathy to the Irwin Family on the death of Marian Irwin and to the O’Gorman family on the passing of Denis O’Gorman.